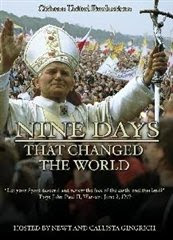 Catholic Online report - Recently, I was greatly inspired seeing the new documentary "Nine Days That Changed The World". Narrated by recent Catholic convert Newt Gingrich and his wife Callista, it is a fascinating story about the life of Pope John Paul II and the singularly significant role the Pontiff had in toppling the communist empire of the Soviet Union. The movie also noted the collaboration between the Pope and President Ronald Reagan and other courageous political leaders who realized how important was the battle for faith and against totalitarianism that was being fought in Poland in the 1970's and 1980's.
One of the most riveting scenes in the movie occurred when Pope John Paul II addressed an enormous crowd of his Polish countrymen. At one point, the Pope began to pray in a way I have never seen before as he supernaturally invoked the Holy Spirit by chanting "Come Holy Spirit, Change This Land". While the Pope fervantly prayed to the Holy Spirit to save Poland, the one million or so Polish faithful spontaeously began to sing a traditional Polish song which honored Christ their savior. It was one of the most moving things I have ever seen or expect to see.
Pope John Paul II's visit to Poland strengthened the faith of his countrymen, unified the country and emboldened them to take on the corrupt communistic regime. Once the Polish people came together in prayer, Poland was a changed country and the days of communism were numbered.
The movie is a powerful testament to what a faithful leader can do to lead a country to victory over an all powerful adversary - the Soviet Empire - all without firing a shot.
While Nine Days That Changed The World tells of an epic struggle between faith, freedom and totalitarianism that occurred decades ago and an ocean away, it is a story which is deeply relevant to the crossroads America is currently facing.
According to recent polls, Americans are worried like never before about the state of our country. We are concerned about our current political leaders who are pushing us headlong towards socialism and totalitarianism. This is a failed ideology which did not work in Europe and resulted in upheaval and popular revolt in Poland and other countries of eastern Europe.
We Christians are particularly troubled by a culture that has embraced moral relativism and rejected the fundamental Christian values America was founded on.
We are troubled by what is happening in the halls of Congress where free spending politicians are bankrupting our country with policies which favor the majority party's voting constituencies and hurt almost everyone else, including the working class and poor.
We are troubled by an out of control judiciary which routinely overrides the will of the people, ignores the rule of law and the Constitution and enables elite judges to cavalierly reject the most fundamental building block of society; marriage between a man and a woman.
Like many Americans, I look around and wonder where is the America that Ronald Reagan described as a shining city on a hill whose beacon light guides freedom loving people everywhere?
It is becoming more and more apparent that America as we used to know it will not survive without people of faith going to their knees and praying for divine intervention.
But how could this happen to America? This is a question that more and more Americans are asking.
The small businessman who works 60 - 70 hours a week just to feed his family asks it.
The retired person who has worked a lifetime and has seen his retirement cut in half asks it.
The elderly, sick and handicapped ask it as they grapple with a federal takeover of health care which will ration health care based on a soulless utilitarian yardstick that restricts health care to those who need it the most.
Young people ask it when they graduate from high school and college only to find there are no jobs.
Hard working Americans and the unemployed ask it as they realize that the American dream has been stolen by an elite cabal of big government, big labor and big business interests.
Christians ask it as they wonder about a President who proclaims that Muslims have a right to build a mosque on hallowed land at ground zero. This comes from a president who claims that America is not a Christian nation and who dismissed Christians as people " who cling to their religion."
America is at a historical crossroads. A strong majority of Americans are troubled by the country's slide towards socialism, moral relativism and economic collapse. However, like the oppressed people of Poland, we Americans need to come together in prayer to save our country. It is not too late to restore the shining city on the hill. But we do need to appreciate the lessons of history since as Sir Edmund Burke said those that do not know learn from history are doomed to repeat it.

One of the significant crossroads depicted in theNine Days movie was when the Polish people came together to hear Pope John Paul II speak and they suddenly realized that they greatly outnumbered their opponents, the atheistic communists. This realization was a turning point for the Polish people who realized that not only did they not need to be afraid but that it was the communist leaders who should be afraid. In so doing, the people of Poland embraced one of Pope John Paul II's most well known spiritual prescriptions that people of faith "Be Not Afraid".
As in Poland, Americans should be encouraged by the fact that the moral and economic difficulties we are facing are the handiwork of an elite that is relatively small in numbers. A recent online article in the American Spectator entitled "America's Ruling Class - and the Perils of Revolution" describes who this elite ruling class is and how opposed they are to traditional American values like faith in God, freedom and limited government.
This article also notes the somewhat reassuring fact that the elite ruling class is a distinct minority - approximately one-third of all Americans. As such, we do not need to be afraid of this elite minority but we do need to react to the threat they pose to us and our country.
Like the downtrodden but faith-filled Poles who confronted their communist adversaries, Americans need to boldly step out to recapture our country from the clutches of those who cling to morally bankrupt and historically disproven ideologies like moral relativism, atheism, socialism and the like. In order to do so we must begin, like our Polish brethren, by getting down on our knees and invoke God's providence to save America.
Make no mistake, the task ahead of those who would seek to restore America is daunting indeed. We are witnessing an accelerating attack on America's moral, economic and political foundations that is unprecedented. And we did not get here overnight. But the hour is late because a democracy which embraces moral relativism and rejects traditional values like faith in God, authentic marriage and respect for life is living on borrowed time.
There is a strong feeling of unease and discontent which is percolating among Americans. More and more of us are awakening from our slumber and are committing to take bold action to recapture America. It is imperative that the Christian community close ranks in solidarity and "be not afraid" to confront and oppose the elite ruling class who would continue to lead America down the slippery slope we have traveled for some time now. We need to take heart in scripture which tells us that "I can do all things in Christ who strengthens me". Philippians 4:13
In this grave time for America, the effort to restore America must begin with Christians getting down on their knees and fervently praying for God's blessing in the battle that is being waged for the future of America. We would do well to follow Pope John Paul II's example of invoking the Holy Spirit to save his homeland of Poland. A good starting point would be for all Christians to pray unceasingly "Come Holy Spirit and Restore America.' It worked in Poland and it will work again in America if we follow the example of our faithful Polish brothers and sisters in Christ.
http://www.catholic.org/politics/story.php?id=37909
Posted by Jesus Caritas Est at 2:25 PM