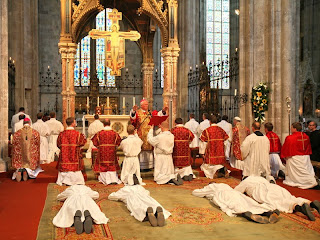 Kath.net/Cross press report:  in the Cistercian Monastery Heiligenkreuz in the Vienna Woods the number of monks has increased to 88, meaning a doubling in recent years and the highest number of employees in the nearly 900 history. The average age of the monks is 47 years.
"A wave of young people who want to share our lives recently existed in the middle ages", p. Karl Wallner, Professor of theology at the Teutonic order's College and youth pastor is happy.
To the secret of so many appeals he says: "There are especially the liturgy in Gregorian chant to the standards of the II Vatican Council and our commitment to the Pope and ecclesiastical Magisterium." 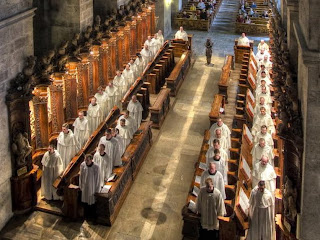 In recent weeks Abbot Gregor Henckel Donnersmarck dressed a seven young men in the novitiate, six novices have filed the "temporal" vows, five novices extend seven monks decided to place the "final vows" and four monks were ordained by Bishop Lackner deacons
Heiligenkreuzer however, also need to take a "disposal": your previous prior Christian Feurstein was elected Abbot of monastery rein in Styria and 21. Introduced August in his Office.

"Interesting is that all entrants made their first contact with us over the Internet." "Some have visited the site of the monastery several times until they found the courage to visit the monastery also life then finally".
"Usque ad mortem"

Mary Ascension laid Patrozinium day of Holy Cross, the seven young monks had already temporal vows their solemn profession now, the final vows "usque ad mortem" are to death:
P.Johannes Paul Chavanne and P.Mag. Both Wiener, P.bacc.phil are Tobias Westerthaler. Edmund Waldstein is lower Austrian P.Mag. Damian Lienhart and P.Dipl.Ing. Styrians and P.Dipl.kfm are Emmanuel Heissenberger. Dr. oec. Lic. theol. Justinus bad luck and P.Mag. Placidus Beilicke come from Germany.
You have different appeal routes, but are all just over 20. One is microbiologist, a Certified Business Economist, Economist, a graduate engineer for water management. More about some of them "Chant - life paradise" is in the book can be read. The vows were 120 priests and religious and over 700 believers and family members who filled the whole pen courtyard at the subsequent festive Agape.
SOURCE http://kath.net/detail.php?id=27885
IMAGE SOURCE http://www.stift-heiligenkreuz.org/