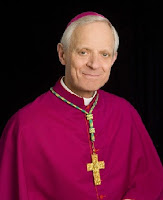 USCCB REPORT:
Doctrine Of The Faith Congregation Names Archbishop Wuerl To Guide Bringing Anglican Groups Into Catholic Church In U.S.
WASHINGTON(September 23, 2010)—The Vatican Congregation for the Doctrine of the Faith (CDF) has named Archbishop Donald Wuerl of Washington to guide the incorporation of Anglican groups into the Catholic Church in the United States. In this position, he is a delegate of the congregation and heads the U.S. bishops’ ad hoc committee charged with assisting CDF in implementing the apostolic constitution Anglicanorum coetibus. Pope Benedict XVI issued the document in November 2009 to provide for establishing personal ordinariates for Anglican groups who seek to enter corporately into full communion with the Catholic Church. The personal ordinariate is a canonical structure similar to a diocese that covers the area of a bishops’ conference. This permits the incoming Anglicans to be part of the Catholic Church while maintaining aspects of their Anglican heritage and liturgical practice. Other members of the ad hoc committee are Bishop Kevin Vann of Fort Worth, Texas, and Bishop Robert McManus of Worcester, Massachusetts. The committee will be assisted by Father Scott Hurd, who was ordained an Episcopal priest in 1993, joined the Catholic Church in 1996, and was ordained a Catholic priest for the Archdiocese of Washington in 2000. Father Hurd will assist Archbishop Wuerl as staff to the ad hoc committee and a liaison to the United States Conference of Catholic Bishops (USCCB). Interested Anglicans are asked to contact Archbishop Wuerl through the Washington Archdiocese. The ad hoc committee has two tasks:
To facilitate the implementation of Anglicanorum coetibus in the United States
To assess the level of interest in such an ordinariate in the United States.
http://www.usccb.org/comm/archives/2010/10-166.shtml
IMAGE http://blog.beliefnet.com/pontifications/imgs/Donald%20Wuerl.jpg
Posted by Jesus Caritas Est at 4:46 PM