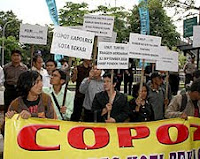 UCAN report: Hundreds of Christians marched on the Indonesian National Police headquarters in Jakarta yesterday to demand police protection following recent attacks on two Protestant clerics in Bekasi, West Java.
“It’s supposed to be the agency for law enforcement and protection. The police department has not yet done its duty well. Policemen even let violence occur,” they said in a statement read out by a protester.
Some 300 people staged the rally after Reverend Luspida Simanjuntak and her assistant Hasean Lumbantoruan Sihombing of the Batak Society Christian Church were attacked on Sept. 12 while on their way to Sunday service.
Sihombing was stabbed in the stomach while Reverend Simanjuntak suffered a concussion after being hit on the head with a wooden plank. Both are still in hospital.
“We came here to ask police for protection. We pray the tragedy will not recur,” said Reverend Parasian Hutasiot of the Philadelphia Church, which is part of the Batak Society Christian Church.
He pointed to the 2006 joint ministerial decree on building worship places as the main motive behind the attacks.
Reverend Pestaria Hutajulu of the Indonesian Christian Church said she was once beaten by a group of people.
“Places of worship can be banned, but the act of worshipping cannot!” she said.
“We want the police to protect religious freedom and all citizens,” said Stefanus Gusman of the Union of Catholic University Students.
The attacks, he said, “had nothing to do with religion but were committed by a radical group using religion as an excuse.”
Earlier, Father Antonius Benny Susetyo, executive secretary of the Indonesian bishops’ Commission for Ecumenical and Interreligious Affairs, as well as interfaith leaders and activists, visited police headquarters.
“We asked the police to take firm action and to protect churches facing problems,” he told ucanews.com.
http://www.ucanews.com/2010/09/17/indonesian-christians-demand-official-protection/
Posted by Jesus Caritas Est at 1:49 PM