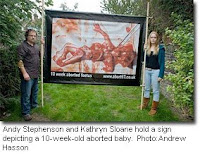 LIFESITENEWS.COM report – Two pro-life activists were arrested this month in Brighton for displaying an allegedly “distressing” graphic sign of abortion outside a publicly-funded abortion facility.
The two were held for 15 hours by police after staff in the British Pregnancy Advisory Service facility claimed patients were “traumatised and upset” by the pictures. The 7ft by 5ft banner showed an aborted eight-week-old embryo. The group has previously demonstrated without incident in Brixton, south London.
Andy Stephenson and Kathryn Sloane are the leading members of Abort '67, an organisation, named after Britain’s 1967 Abortion Act, affiliated with the Center for Bioethical Reform in the U.S. and the Canadian Centre for Bioethical Reform (CCBR), based in Calgary. These groups maintain that the use of graphic images of abortion, even if they are deemed offensive or frightening, are essential to bring the realities of abortion into the debate.
Stephenson told British media, “We went to the clinic because we know what women are going in there for and it seems the obvious place to hold a protest."
The two were arrested about noon and were taken to the local police station and held until being interviewed at midnight. “They took our fingerprints and put us in cells – they didn’t interview us until midnight and we weren’t let out until three in the morning,” Stephenson said.
“It seems very arbitrary what is allowed and what is not allowed,” he added. “All we are doing is campaigning to make abortion unthinkable. Most pro-life groups are working to change the abortion laws - we’re working to change public opinion.”
Stephenson also said that, "The women who go to these clinics are simply not told the full story as to what abortion involves and the damage that it causes women. We always stand in complete silence and let the pictures do the talking.”
Ann Furedi, the head of the British Pregnancy Advisory Service, which runs the Wistons facility, said she supports the right of pro-life activists to demonstrate against abortion facilities, up to a point. Furedi also told the Daily Telegraph, “There is a distinction between freedom of expression and actions that are designed to distress people who are accessing legal, medical services.”
But Stephanie Gray, the founder of CCBR told LifeSiteNews.com that although the arrests are upsetting, they may serve to bring the issue into the public debate in Britain, which has earned the nickname “abortion capital of Europe” after reporting upwards of 200,000 abortions last year.
“As disheartening as their arrest is, it is forcing the abortion debate – and the free-speech debate – into the public square,” she said.
Gray, who has had legal battles of her own at the University of British Columbia, continued, “Now, people are talking and thinking about what abortion looks like in a way they haven't before, thanks to the courage of Andy and Kathryn. And it's interesting that an abortion advocate responded to their protest by calling it distressing. If abortion is such a good idea, why would a picture of it be distressing?”
The Crown Prosecution Service has said it will decide next month whether to press charges under the Public Order Act. The photo of aborted children were alleged to have caused “harassment, alarm or distress,” according to complainants.
Andrea Williams, director of the Christian Legal Centre, which is supporting the case, said: "This is a test case for their democratic right to reveal what abortion really is like. This case raises important questions about whether our society will allow robust and rigorous debate about what remains a highly controversial issue.”
“Many people in the UK remain horrified at the nature and scale of abortion in this country,” she continued. “There have been 7 million abortions in England and Wales since abortion was legalised in 1967. Obviously there are a range of ways in which people will choose to engage in this important debate depending on what they judge to be the most effective in each situation. However, the freedom to engage and provoke public debate on this matter of life and death must be safeguarded."
http://www.lifesitenews.com/ldn/2010/sep/10092108.html
Posted by Jesus Caritas Est at 8:24 PM