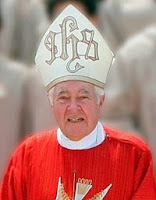 Fr Alban Quinn, O.Carm One of the best-known and much-loved friars of the Carmelite Order, Fr Alban Quinn, O.Carm., died on 15 September 2010 at the age of 86.Alban - whose nickname was 'Tiny' because of his great height - was a member of the American Province of the Most Pure Heart of Mary (sometimes known as the PCM or Chicago Province).In 1971 Alban was appointed Apostolic Administrator (effectively the role of bishop) of Sicuani in the Latin American nation of Peru. Sicuani is a region in the high Andes mountain range and an administrative area of the Church known as an Apostolic Prelature, entrusted to the pastoral care of the Carmelite Order by the Holy See.As Apostolic Administrator until 1999, Alban led the Carmelite Family in working amongst some of the financially poorest people in the world. His dedication to the poor in the rural areas of the Andes was admired by local people and the Carmelite Family around the world but won him no small opposition from conservative groups within the Church.When news of his death reached Britain, Julian Filochowski, who as Director of CAFOD had worked closely with Tiny in many projects on behalf of and with the poor, spoke of him as a beacon of hope.May this great Carmelite and pastor of God's people rest in peace
http://www.indcatholicnews.com/news.php?viewStory=16789
Posted by Jesus Caritas Est at 5:43 PM