INDIA: CHURCH SETS UP A HOTLINE FOR REPORTING VIOLENCE 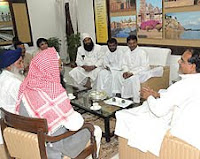 UCAN REPORT;
Church officials in Madhya Pradesh state have set up a hotline for people to report incidents of sectarian violence ahead of a court verdict on a controversial religious site.
“People will just have to call the helpline and tell us what is going on,” said Father Anand Muttungal, who is in charge of the service. “We will in turn inform the police about the happenings.”
The Allahabad High Court in neighboring Uttar Pradesh state was to pronounce its verdict on Sept. 24 on the ownership of a plot of land in the state’s Ayodhya town, where a disputed 16th-century mosque stood.
The Supreme Court yesterday deferred the judgment by one week.
Hindu zealots demolished the mosque in December 1992, claiming that Muslim ruler Babur had demolished a Hindu temple there in order to build the mosque. The demolition sparked off nation-wide Hindu-Muslim riots. Protracted legal battles continued over the ownership of the land.
As part of security arrangements, the federal government banned sending mass text and multimedia messages in the country. In the past some groups have used such means to mobilize crowds for riots.
Madhya Pradesh, which has several areas that are prone to sectarian violence, has stepped up security, including night-time police patrolling.
State Chief Minister Shivraj Singh Chauhan also issued special instructions to his officials and ministers to maintain “law and order at all costs.”
Father Muttungal along with leaders of other religious and secular organizations also met Chauhan to discuss the matter.
http://www.ucanews.com/2010/09/24/church-sets-up-sectarian-violence-hotline/
Posted by Jesus Caritas Est at 4:49 PM