VATICAN: POPE REMEMBERS VISIT TO UK AND OTHER VIS NEWS 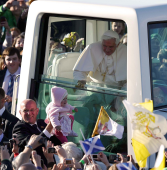 BENEDICT XVI RECALLS HIS APOSTOLIC TRIP TO UNITED KINGDOM VATICAN CITY, 22 SEP 2010 (VIS REPORT) - During this Wednesday's general audience, held in St. Peter's Square, the Pope turned his attention on his recent apostolic trip to the United Kingdom, which took place from 16 to 19 September and which he described as "a historic event marking a new important phase in the long and complex history of relations between that people and the Holy See". Referring to the first event of the trip, his meeting with Queen Elizabeth II in Edinburgh, the Holy Father recalled how "it was a highly cordial meeting, characterised by a deep and mutual concern for the wellbeing of the peoples of the world and for the role of Christian values in society". In Glasgow, where he celebrated the first Mass of his trip on the feast of St. Ninian, the first evangeliser of Scotland, "I recalled the importance of the evangelisation of culture, especially in our own time in which an insidious relativism threatens to darken the unchanging truth about the nature of man". The second day of the visit began with a meeting in London with the world of Catholic education, at which Benedict XVI dwelt on "the importance of the faith in forming mature and responsible citizens. I encouraged the many adolescents and young people who welcomed me with warmth and enthusiasm", he said, "not to follow limited goals, or to satisfy themselves with comfortable choices but to aim at something greater: the search for true happiness which is to be found only in God. "In my subsequent meeting with the leaders of other religions present in the United Kingdom", he added, "I pointed out the ineluctable need for sincere dialogue, which in order to be fruitful requires respect for the principle of reciprocity. At the same time, I identified the search for the sacred as a ground common to all religions, upon which to build up friendship, trust and collaboration". The Pope went on: "The fraternal visit to the Archbishop of Canterbury was an opportunity to underline the shared commitment to bear witness to the Christian message which unites Catholics and Anglicans. This was followed by one of the most significant moments of my apostolic trip: the meeting in the Great Hall of the British parliament" where, he explained, "I underlined the fact that religion, for lawmakers, must nor represent a problem to be resolved, but a factor that makes a vital contribution to the nation's historical progress and public debate, especially by recalling the essential importance of ensuring an ethical foundation for choices made in the various areas of social life". The praying of Vespers with the Christian communities of the United Kingdom in Westminster Abbey, the first visit made there by a Successor of Peter, "marked an important moment in relations between the Catholic community and the Anglican Communion", Pope Benedict said. He then recalled how, on Saturday morning, a Eucharistic celebration was held at Westminster Cathedral, which is dedicated to the Most Precious Blood of Our Lord. "I as overjoyed to meet large numbers of young people", he remarked. "With their enthusiastic presence, ... they showed that they wanted to be protagonists of a new period of courageous witness, effective solidarity and generous commitment to serving the Gospel". Later in the apostolic nunciature, "I met with some victims of abuses committed by members of the clergy and religious. It was a moment of intense emotion and prayer", said the Holy Father. At his meeting with people responsible for protecting children and young people in Church environments "I thanked them and encouraged them to continue their work, which is part of the Church's long tradition of concern for the respect, education and formation of new generations". The old people's home he visited on Saturday afternoon testifies, he said, "to the great concern the Church has always had for the elderly, and expresses the commitment of British Catholics to respecting life irrespective of age or condition". "The culmination of my visit to the United Kingdom was the beatification of Cardinal John Henry Newman, illustrious son of that land. By way of preparation, it was preceded by a special prayer vigil which took place on Saturday evening at Hyde Park in London. ... To the multitude of faithful, especially young people, I presented the shining example of Cardinal Newman, intellectual and believer, whose spiritual message can be summed up in his the witness that the way of knowledge does not mean closing in on oneself; rather it means openness, conversion and obedience to He Who is the Way, the Truth and the Life". Benedict XVI concluded his remarks by highlighting how "this apostolic trip confirmed my profound conviction that the old nations of Europe possess a Christian soul which merges with the 'genius' and history of their respective peoples, and the Church never ceases to work to keep this spiritual and cultural tradition alive".AG/ VIS 20100922 (830)

POPE CALLS FOR PRAYER FOR CATHOLIC-ORTHODOX UNITY VATICAN CITY, 22 SEP 2010 (VIS) - At the end of his catechesis during this morning's general audience, and before greeting those present in various languages, the Holy Father invited people to pray for the success of the work of the Joint International Commission for Theological Dialogue between the Catholic Church and the Orthodox Church, which is currently meeting in plenary session in the Austrian capital, Vienna. "The theme of the current phase", he said, "is the role of the Bishop of Rome in the communion of the Universal Church, with particular reference to the first millennium of Christian history. Obedience to the will of the Lord Jesus and consideration for the great challenges facing Christianity today, oblige us to commit ourselves seriously to the cause of re-establishing full communion among the Churches. I exhort everyone to intense prayer for the work of the commission and for the ongoing development and consolidation of peace and harmony among the baptised, that we may show the world an increasingly authentic evangelical witness".AG/ VIS 20100922 (180)

SECRETARIAT OF STATE COMMUNIQUE ON IOR INVESTIGATION VATICAN CITY, 22 SEP 2010 (VIS) - Yesterday afternoon the Holy See Press Office published the following communique issued by the Secretariat of State concerning investigations by Roman tax authorities into the president and the director general of the Institute for Works of Religion (IOR). The investigations concern the suspected violation of European norms on money laundering and have involved a freeze on twenty-three million euros held by the institution. "As is well known, the authorities of the Holy See have repeatedly expressed their desire for complete transparency regarding the financial activities of the Institute for the Works of Religion (IOR). This requires the implementation of all procedures aimed at preventing terrorism and money laundering. For this reason the authorities of the IOR have, for some time, been seeking the necessary contacts and meetings - both with the Bank of Italy and with relevant international bodies (the Organisation for Economic and Co-operation and Development (OECD) and the Financial Action Task Force on Money Laundering (GAFI)) - for the inclusion of the Holy See in the so-called White List. "The Holy See thus expresses its perplexity and amazement at this initiative by the Procurator's Office in Rome, bearing in mind the fact that the necessary information is already available at the competent office of the Bank of Italy, and that similar operations regularly take place with other Italian credit institutions. "As for the sums mentioned, it should be noted that they are cash transactions with non-Italian credit institutions, the beneficiary of which is the IOR itself. "The Holy See thus wishes to express its complete confidence in the president and the director general of the IOR".SS/ VIS 20100922 (290)

CARDINAL CORDES AT CENTENARY OF CATHOLIC CHARITIES USA VATICAN CITY, 22 SEP 2010 (VIS) - The Pontifical Council "Cor Unum" today issued a communique concerning the forthcoming visit to the USA of Cardinal Paul Josef Cordes, president of the council. At the invitation of Catholic Charities USA, he is due to deliver the keynote address at a gathering being held in Washington DC from 25-29 September to mark the centenary of its founding. "The cardinal", says the English-language communique, "will reflect on the faith roots of the Church's charitable commitment and the need to nurture the specific identity of ecclesial organisations, as reaffirmed by the first Encyclical of Pope Benedict XVI, 'Deus caritas est'. "Catholic Charities USA", the note adds, "with more than 1700 agencies and institutions operating in local dioceses, provides vital outreach to some nine million people a year of all religious, social and economic backgrounds. Pope Benedict 'prays that the present anniversary will be an occasion for gratitude to Almighty God for the abundant harvest of generosity, solidarity and good works reaped.' His Holiness encourages charity personnel to 'see their work as a tangible witness of their faith in Christ'. "As part of the visit, Cardinal Cordes will have meetings and deliver lectures on charity, social doctrine and the priesthood in the archdioceses of New York and Newark and dioceses of the Province of Connecticut".CON-CU/ VIS 20100922 (230)

OTHER PONTIFICAL ACTS VATICAN CITY, 22 SEP 2010 (VIS) - The Holy Father appointed Archbishop Giovanni d'Aniello, apostolic nuncio to the Democratic Republic of Congo, as apostolic to Thailand and Cambodia, and apostolic delegate to Myanmar and Laos.