VATICAN: POPE: MORAL RESPONSIBILITY OF GOVERNMENTS AND OTHER NEWS 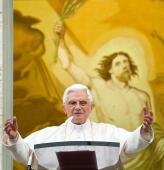 MESSAGE OF CONDOLENCE FOR VICTIMS OF NORWAY ATTACKS

VATICAN CITY, 23 JUL 2011 (VIS) - Cardinal Secretary of State Tarcisio Bertone S.D.B. has sent a message of condolence, in the name of Benedict XVI, to King Harald V of Norway for the recent terrorist attacks that took place in that country.

The Pope expresses his profound sadness at the great loss of life caused by the explosion of a car bomb in Oslo and the shootings at a youth camp on the island ofUtoya. (IMAGE SOURCE: RADIO VATICANA)

The English-language message continues by saying that Benedict XVI "offers fervent prayers for the victims and their families, invoking God's peace upon the dead and divine consolation upon those who suffer. At this time of national grief he prays that all Norwegians will be spiritually united in a determined resolve to reject the ways of hatred and conflict and to work together fearlessly in shaping a future of mutual respect, solidarity and freedom for coming generations".

CELEBRATION OF 375TH ANNIVERSARY OF PATRON OF COSTA RICA

VATICAN CITY, 23 JUL 2011 (VIS) - Made public today was a Letter from the Pope, written in Latin and dated 12 July, in which he appoints Cardinal Francisco Robles Ortega, archbishop of Monterrey, Mexico, as his special envoy to the closing celebrations of the Jubilee Year for the 375th anniversary of the discovery of the image of Our Lady of the Angeles, patron of Costa Rica. The event is due to be held in the Costa Rican city of Cartago on 2 August.

The cardinal will be accompanied on his mission by Fr. Mario Quiros Quiros, formator and spiritual director of the national seminary of "Nuestra Senora de los Angeles", and by Fr. Jose Francisco Arias Salguero, chancellor of the diocesan Curia and judge of the national ecclesiastical tribunal of Costa Rica.

- Appointed Cardinal Jozef Tomko, prefect emeritus of the Congregation for the Evangelisation of Peoples, as his special envoy to celebrations marking the centenary of the dedication of the cathedral of the Immaculate Conception inMoscow, Russian Federation. The event is due to take place on 25 September.

- Gave his consent to the canonical election carried out by the Synod of Bishops of the Greek Catholic Ukrainian Church of Fr. Dmytro (Bobdan) Hryhorak O.S.B.M., apostolic administrator of the eparchy of Buchach of the Ukrainians, Ukraine, as bishop of the same eparchy (area 4,829, population 405,000, Catholics 216,000, priests 201, religious 22). The bishop-elect was born in Ivano-Frankivsk, Ukraine in 1956 and ordained a priest in 1992.

ANGELUS: MORAL RESPONSIBILITY OF THOSE IN GOVERNMENT

VATICAN CITY, 24 JUL 2011 (VIS) - In his remarks before praying the Angelus this morning, Benedict XVI commented on the first reading from today's liturgy, a passage from the Book of Kings in which Solomon, ascending the throne, asks God for an understanding heart to serve His people with justice and to distinguish between good and evil.

Addressing the faithful gathered in the inner courtyard of the Apostolic Palace at Castelgandolfo, the Pope explained the meaning of Solomon's prayer. "We know that 'heart' in the Bible indicates not just a part of the body but the core of the individual, the seat of his intentions and judgments; in other words, his conscience. An 'understanding heart' means, then, a conscience capable of listening, sensitive to the voice of truth and thus able to distinguish good from evil. In Solomon's case the request is motivated by his responsibility for guiding a nation, Israel, the people whom God chose to reveal His plan of salvation to the world. The king of Israelmust, then, seek constant harmony with God and listen to His Word, in order to guide the people along the ways of the Lord, the way of justice and peace.

"However", the Holy Father added, "the example of Solomon applies to us all. Each of us has a conscience which makes us, in a certain sense, 'king'; in other words, which enables us to exercise the supreme human dignity of acting according to right conscience, doing good and avoiding evil. Moral conscience presupposes a capacity to listen to the voice of truth, humbly to follow its guidance. People called to play a role in government naturally have a further responsibility and, as Solomon teaches, have even greater need of God's help.

"But everyone has their part to play in their own particular situation. An erroneous mentality suggests that we should ask God for favours or favourable conditions. Yet the truth is that the real quality of our lives, and of social life in general, depends on the sound conscience of each individual, on the capacity of each person to recognise what is good, distinguish it from evil and patiently seek to put it into effect".

Pope Benedict concluded: "May the Virgin Mary help us, with God's grace, to make out own consciences open to truth and sensitive to justice, in order to serve the Kingdom of God".

ABANDON FOREVER THE WAYS OF VIOLENCE

VATICAN CITY, 24 JUL 2011 (VIS) - At midday today after praying the Angelus from his balcony overlooking the inner courtyard of the Apostolic Palace at Castelgandolfo, the Pope again spoke of his "profound sadness at the serious acts of terrorism that took place in Norway last Friday. We pray for the victims, for the wounded and for their loved ones. Once again I would like to reiterate my heartfelt appeal to abandon forever the ways of violence and to shun the logic of evil".

The Holy Father then went on to greet faithful gathered in the Italian Alpine resort of Les Combes, where he has often spent time in the summer. They have, he observed, "participated in the Mass presided by Cardinal Tarcisio Bertone, my secretary of State, who was present despite being in mourning for a member of his own family [the cardinal's brother Paolo died on Friday]. I greet and thank the bishop of Aosta, the rector of the Salesians, the civil and military authorities of the region and the benefactors who have contributed to renewing the residence there. With particular affection I recall the time I spent in that beautiful spot, which was formed by the love of the Creator God and sanctified by the presence of Blessed John Paul II. To the young people and children of the parish of Blessed Pier Giorgio Frassati of Turin and to all holidaymakers I wish a happy summer".

CARDINAL VIRGILIO NOE DIES AT THE AGE OF EIGHTY-NINE

VATICAN CITY, 25 JUL 2011 (VIS) - Benedict XVI has sent a telegram of condolence to Maria Noe, sister of Cardinal Virgilio Noe, archpriest emeritus of the Vatican Basilica, vicar general emeritus of the Pope for Vatican City State and president emeritus of the Fabric of St. Peter's. The cardinal died yesterday at the age of 89.

In the telegram the Pope speaks of his participation in the mourning for the cardinal, "who was for many years a diligent collaborator of the Holy See, particularly in the Office of Liturgical Celebrations and as archpriest of the papal basilica of St. Peter's. In everything he did he provided highly-valued testimony of fervent priestly zeal and faithfulness to the Gospel".

"Following the release on 13 July of the report by the Irish government commission of enquiry into allegations of abuse of minors by clergy in the diocese of Cloyne (the Cloyne Report), and in particular in the wake of the subsequent reactions, Archbishop Giuseppe Leanza, apostolic nuncio in Ireland, has been recalled to Rome for consultations with the Secretariat of State".