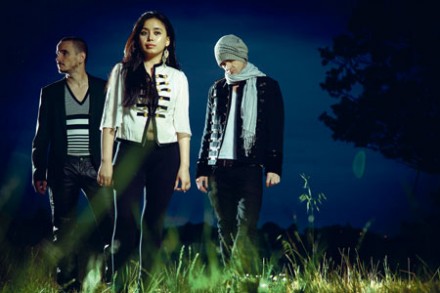 The band ooberfuse performed at World Youth Day last year
An electro-pop band have released a single in support of the English and Welsh Church’s new vocations drive.
Fr Christopher Jamison OSB, director of the National Office for Vocation, commissioned the band ooberfuse to write the soundtrack for the Church’s new vocations framework. Their song, Call my name, can be heard here and comes from their forthcoming album Seventh Wave, to be released in August.
Fr Jamison described the single as a “wonderful gift given to the Church. The words are poetic and inspired, worthy of the psalms.”
The song comes after their previous single, Heart’s Cry, which was the youth anthem for the papal visit to Britain in September 2010.
Hal St John from the band described the task as a “challenge” since the song had to capture “the essence of something as sacred and as intimate as being spoken to and summoned by God in the deepest recesses of our hearts”.
He said: “When God speaks to us he does so in a strange and other worldly language that it is sometimes hard if not altogether impossible to render into intelligible words. His gentle yet persistent call cuts through the clamour and roar of contemporary life treading as softly as dove’s footsteps. For some pop music is part of the noise that drowns out the sound of divinity, desensitising us to the transcendent. On the face of it, it seems incongruous that pop music, especially dub-step, should be used to heighten our awareness of God’s call to each one of us.”
Cherrie Anderson, the band’s lead singer, said after writing the song she realised that Cheryl Cole also planned to release a single with the same name. “This is a weird and uncanny coincidence,” she said. “Whereas her song is about her lover calling out her name, our song is about God calling out our name, summoning us to a higher life in which we fulfil our holy and God-given destinies.”
SHARED FROM http://www.catholicherald.co.uk/news/2012/05/28/pop-band-release-single-in-support-of-vocations-drive/
Posted by Jesus Caritas Est at 4:19 PM