Asia news report:
Three staffers are also killed. Bodies have been flown to Tripoli before leaving for a US military base in Germany and then stateside. Suffocation was the cause of death. An Islamic group claimed responsibility for the attack.

Benghazi (AsiaNews) - The US ambassador to Libya, Christopher Stevens, and three staffers were killed during an attack against the US Consulate in the east Libyan city, the country's Interior Ministry and security sources reported.

An unidentified armed group attacked the building with hand grenades and gunfire. Rocket-propelled grenades were also fired at the consulate from a nearby farm. A US-produced film deemed insulting by Muslims ostensibly was the spark.

The ambassador, who was paying a short visit to Benghazi, apparently died of suffocation during the attack, but there is no confirmation about how he and the other three were killed.

Sources told AsiaNews that people in Benghazi are holed up in their homes.

A group calling themselves the 'Islamic law supporters' claimed responsibility for the attack in response to the release of the film.

The bodies of the dead were transported to the Benghazi international airport, to be flown to Tripoli and then onwards to a major US airbase in Germany.

Stevens arrived in Tripoli to take up the post of ambassador in May 2012, having previously served twice previously in Libya.

He had also served as the US government's representative to the Libyan National Transitional Council (NTC) during the 2011 uprising against the government of Muammar Gaddafi.

SHARED FROM ASIA NEWS
Posted by Jesus Caritas Est at 11:01 PM No comments: 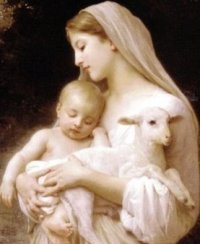 by Mark Alessio Edited from Mark Alessio: In 1513, a feast of "The Holy Name of Mary" was granted by Papal indult [Pope Julius II] to the diocese of Cuenta in Spain. It was assigned with proper Office on September 15, the octave day of Our Lady's Nativity. With the reform of the Breviary undertaken by Pope St. Pius V, the feast was abolished, only to be reinstituted by his successor, Pope Sixtus V, who changed the date to September 17. From there, the feast spread to the Archdiocese of Toledo [1622] and, eventually, to all of Spain and to the Kingdom of Naples [1671].

Throughout this time, permission to celebrate the feast was given to various religious orders in a prudent manner as has been the custom throughout Church history regarding feast-days, their dates, offices, liturgical expression, etc. However, this Feast of the Holy Name of Mary would one day be joyfully extended to the Universal Church, and this on account of rather dramatic circumstances involving one of Poland's great military heroes, John Sobieski [1629-1696].

While acting as field-marshal under King John Casimir, Sobieski had raised a force of 8,000 men and enough provisions to withstand a siege of Cossacks and Tartars, who were forced to retire unsuccessfully and at a loss. In 1672, under the reign of Michael Wisniowiecki, Sobieski engaged and defeated the Turkish army, who lost 20,000 men at Chocim.

In September, the men joined with the German troops under John George, Elector of Saxony, and Prince Charles of Lorraine. On the eighth day of the month, the Feast of the Nativity of Mary, Sobieski prepared himself for the ensuing conflict by the reception of Holy Communion.

Battle was engaged before the walls of Vienna on September 12, 1683, with Sobieski seemingly put to flight by "the fierce Turkish forces. However, this retreat was a minor setback only. The Hussars renewed their assault and charged the Turks, this time sending the enemy into a retreat. The combat raged on, until Sobieski finally stormed the enemy camp. The Turkish forces were routed, Vienna was saved, and Sobieski sent the "Standard of the Prophet" to Pope Innocent XI along with the good news. In a letter to the Pontiff, Sobieski summed up his victory in these words: Veni, vidi, Deus vicit -----"I came, I saw, God conquered!" To commemorate this glorious victory, and render thanksgiving to God and honor to Our Lady for their solicitude in the struggle, Pope Innocent XI extended "The Feast of the Holy Name of Mary" to the Universal Church. Although the feast was originally celebrated on the Sunday after the Nativity of Mary, Pope St. Pius X [+1914] decreed that it be celebrated on September 12, in honor of the victory of the Catholic forces under John Sobieski. The history of this feast reminds us in some ways of that of "Our Lady of the Rosary," which was instituted to celebrate and commemorate the victory of the Catholic forces over the Turkish navy at the Battle of Lepanto in 1571: "And thus Christ's faithful warriors, prepared to sacrifice their life and blood for the welfare of their Faith and their country, proceeded undauntedly to meet their foe near the Gulf of Corinth; while those who were unable to join them formed a band of pious supplicants, who called on Mary and, as one, saluted Her again and again in the words of the Rosary, imploring Her to grant victory to their companions engaged in battle. Our sovereign Lady did grant Her aid." [Pope Leo XIII, Supremi Apostolatus, 1883]

Pondering the Meaning of "Mary"

In Hebrew, the name Mary is Miryam. In Our Lady's time, Aramaic was the spoken language, and the form of the name then in use was Mariam. Derived from the root, merur, the name signifies "bitterness."

Miryam was the name of the sister of Moses; and the ancient rabbinical scholars perceiving in it a symbol of the slavery of the Israelites at the hands of the Egyptians, held that Miryam was given this name because she was born during the time of the oppression of her people.
Miryam, the sister of Moses is a "type" of the Blessed Virgin. Miryam was a prophetess who sang a canticle of thanksgiving after the safe crossing of the Red Sea and the destruction of Pharaoh's army; Mary prophesied in Her Magnificat that all generations would honor Her, and She sang of how God would topple the proud and raise the lowly. Miryam supported her brother, Moses, the liberator of his people; as the Co-Redemptrix who united Her sufferings to those of the One Mediator on Calvary, Mary labored alongside the Redeemer, the true Liberator of His people. Just as Jesus was the "antitype" [i.e., fulfillment] of Moses, so was Our Lady the "antitype" of Miryam.
Posted by Jesus Caritas Est at 11:00 PM No comments:

Posted by Jesus Caritas Est at 10:56 PM No comments:


St. Ailbhe was a Bishop and preacher, of Ireland. He was a follower St. Patrick, and is called Albeus in some records. He was a missionary in Ireland, probably sponsored by King Aengus of Munster. He was the first bishop of Emily in Munster, Ireland. There is a legend that he was left in the woods as an infant and suckled by a wolf.