VATICAN : BONO OF U2 VISITS HOLY SEE FOR POOR

Vatican Radio REPORT-  Irish rocker and anti-poverty campaigner Bono was back in the Vatican on Friday to thank the Catholic Church for its support of the Drop the Debt campaign a decade ago and to discuss further ways of working together on aid and development.Vatican Radio’s Philippa Hitchen met up with the lead singer of U2 as he was coming out of a meeting with the president of the Vatican’s Justice and Peace Council, During an almost hour long meeting the cardinal and the rock star turned activist talked about the huge success of the Jubilee 2000 campaign to free the poorest countries from their burden of foreign debts. Thanks to the success of that popular movement, Bono told me, World Bank figures show that “there are an extra 52 million children going to school” as governments have been able to invest in education instead of debt repayments. Bono said he was encouraging the cardinal to communicate to ordinary people in the pews the extraordinary impact they’d made by turning out on the streets in support of that campaign. He said the Church deserves “incredible credit for being in the vanguard of that movement.……it was an interfaith movement and it was also what you might call inter-disciplinary because you had priests and nuns walking alongside punk rockers and musicians and sports people and soccer mums… it was a great panoply of characters…..but I just think the Church hasn’t done a good job yet of telling people what they’ve achieved and we were just trying to figure out how best to do that.”The U2 front man, who met with Pope John Paul II to seek support for his humanitarian work, said he’d “be delighted” to meet with Pope Benedict XVI. During his private audience with the former elderly pontiff, Bono’s famously gave him his blue fly-shades to try on. He also received from the Pope a silver crucifix which he pulled out from under his shirt to show me – I still wear it, he said with a smile. And he still clearly believes very much in the Catholic Church as an important partner in the struggle to improve the lives of the poorest of the poor.
SHARED FROM RADIO VATICANA
Posted by Jesus Caritas Est at 12:24 PM No comments:

Jerusalem (AsiaNews) - Eight Palestinians were killed this morning as Israel continued its air strikes in the Gaza Strip on the fourth day of Operation 'Pillar of Defence'.
Four Palestinians died in Zouhour, Rafah. Three members of Ezzedin al-Qassam Brigades, Hamas's armed wing, were killed in the Maghazi refugee camp. Another fighter died in Tel-al-Sultan, Rafah.
Israel Defence Forces sources said that since the operation began, its air force carried out some 830 strikes, an estimated 180 last night Israel television reported.
Over the same period, Palestinian militias fired more than 350 rockets, at least 16 this morning. About 200 were intercepted by Israel's Iron Dome air defence system.
Overnight, the headquarters of Hamas leader Ismail Haniyeh were also destroyed.
Israel called up 75,000 reservists, and blocked crossing points in the north and east of Gaza, massing troops and tanks on the border for a possible ground operation.
Palestinian civilians living near the border fled south fearing an attack.
Since the start of Israel's offensive four days ago, 38 Palestinians have been killed, including many civilians; 280 were wounded. Three Israeli civilians were also killed.
Diplomatic efforts are underway to stop the escalation. United Nations Secretary General Ban Ki-moon called on both sides to stop further bloodshed. He said he would visit the region as soon as possible.
US President Barack Obama spoke on the phone with Prime Minister Benjamin Netanyahu on Friday, reiterating "US support for Israel's right to defend itself". He also "expressed regret over the loss of Israeli and Palestinian civilian lives".
At the same time, the US leader spoke with Egyptian President Muhammad Morsi asking him to use his influence to stop Hamas. Russia and the European Union are also in favour of Egypt's involvement. Egypt and Malaysia are trying to find an international mediator to broker a truce.
Yesterday, Egyptian Foreign Minister Hisham Qandil visited the Gaza Strip for a few hours, decrying Israel's "aggression". This morning Tunisian Foreign Minister Rafik Abdessalem also travelled to Gaza.
Demonstrations in favour of Hamas were held in the West Bank, Iran, Egypt, Syria and refugee camps in Lebanon.
In the West Bank, Palestinian Authority President Mahmud Abbas said that Israel's offensive will not stop Palestinian demand for recognition as a non-member state in the United Nations on 29 November.
In Israel, activists accuse Netanyahu of launching 'Pillar of Defence' to improve his chances to win in the upcoming elections in January.
SHARED FROM ASIA NEWS IT

Posted by Jesus Caritas Est at 12:22 PM No comments:

IN HONOR OF THE YEAR OF FAITH - JCE NEWS WILL BE SHOWING SOME OF THE TOP CATHOLIC MOVIES OF ALL TIME. TUNE IN FOR THE NEXT PART OF ST. BERNADETTE OF LOURDES- TOMORROW.

Agenzia Fides REPORT - "The appointment of the Archbishop of Abuja, Mgr. John Olorunfemi Onaiyekan, to Cardinal, has aroused the pride of the whole of Nigeria," says to Fides Agency Fr. Patrick Tor Alumuku, Director of Social Communications of the Archdiocese of Abuja. Cardinal-elect Onaiyekan will receive the biretta at the Consistory on 24 November. "The participation of at least 200 people from the Archdiocese of Abuja is expected, in addition to other people from the rest of Nigeria," said Fr. Alumuku. "When the Holy Father announced that our Archbishop would become Cardinal, all Nigerians expressed joy" continues Fr. Alumuku. "The Head of State immediately sent the Cardinal elected a congratulatory message, and all the religious leaders of the Country, Christians and Muslims have expressed their appreciation. A cheering crowd welcomed the Cardinal-elect on his arrival at the airport in Abuja, on his return from Rome, where he participated in the Synod. At an ecclesial level, the Catholic community is happy, and thanked His Holiness for his confidence in the Church of Nigeria, as demonstrated as well by the appointment of the Nigerian Mgr. Fortunatus Nwachukwu, Nunzio in Nicaragua," adds the Director of Social Communications of the Archdiocese of Abuja.Fr. Alumuku points out that "the Church in Nigeria is growing: just look at the hundreds of faithful who participate in every Sunday Mass and the large number of vocations. Some diocesan seminaries can accommodate up to 300 seminarians." "The Church is also very active in the social field and gives concrete hope of life to the population, thanks to hundreds of schools, hospitals and other social institutions throughout Nigeria. The Church is a catalyst for the social development of the Country," said Fr. Alumuku.Fr. Alumuku is also Director of the Nigerian Catholic television, the Catholic Television of Nigeria, which began broadcasting on 1 January 2010. "At the moment we have some programs which are transmitted through a private network, the African Independent Television. Among these is the Sunday Mass which is broadcast throughout the country," says Fr. Alumuku. "Our goal is to gradually increase the hours of programming, bringing them first to eight, then twelve, and finally to twenty-four hours a day in order to have our own network of transmissions" he concludes. (L.M.) (Agenzia Fides 16/11/2012)
Posted by Jesus Caritas Est at 12:18 PM No comments:

THE 2012 Rerum Novarum Oration was held on Tuesday 13 November at the Australian Catholic University and the chosen theme was “Labouring for the common good”.

Senator Madigan was catapulted from the relative obscurity of his Ballarat foundry, to the lofty halls of Australia’s Federal Parliament in Canberra, becoming the first representative of the Democratic Labor Party elected to the Australian Senate in almost four decades. In his maiden speech to the parliament, Senator Madigan spoke of putting the “Common Good back into the Commonwealth”.

Dr Tan received his Doctorate in Political Theology from the Australian Catholic University and has studied Law, International Relations, History and Theology at the Pontifical University of St Thomas Acquinas in Rome.

The Oration is an annual event of the Office of Justice and Peace commemorating the 1891 Encyclical of His Holiness Pope Leo XIII Rerum Novarum, that formed the foundation of the Church’s social doctrine in modern times.

Click HERE to read  the Oration by Senator John Madigan

Click HERE to read the Oration by Dr Matthew Tan

LISTEN to a podcast of the Oration's by Senator John Madigan and Dr Matthew Tan by clicking on the play button below:

Click HERE to read the Acknowlegement of Country by Michael and Augustine Kadende, students of St Leo the Great Altona North

Click HERE to read the Opening Prayer by Claire and Alessia, students from the Academy of Mary Immaculate

Posted by Jesus Caritas Est at 12:16 PM No comments:


1 Timothy 5: 3 - 10
3Honor widows who are real widows.4If a widow has children or grandchildren, let them first learn their religious duty to their own family and make some return to their parents; for this is acceptable in the sight of God.5She who is a real widow, and is left all alone, has set her hope on God and continues in supplications and prayers night and day;6whereas she who is self-indulgent is dead even while she lives.7Command this, so that they may be without reproach.8If any one does not provide for his relatives, and especially for his own family, he has disowned the faith and is worse than an unbeliever.9Let a widow be enrolled if she is not less than sixty years of age, having been the wife of one husband;10and she must be well attested for her good deeds, as one who has brought up children, shown hospitality, washed the feet of the saints, relieved the afflicted, and devoted herself to doing good in every way.

Posted by Jesus Caritas Est at 11:56 AM No comments: 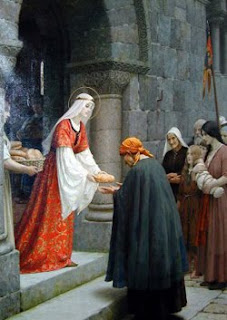