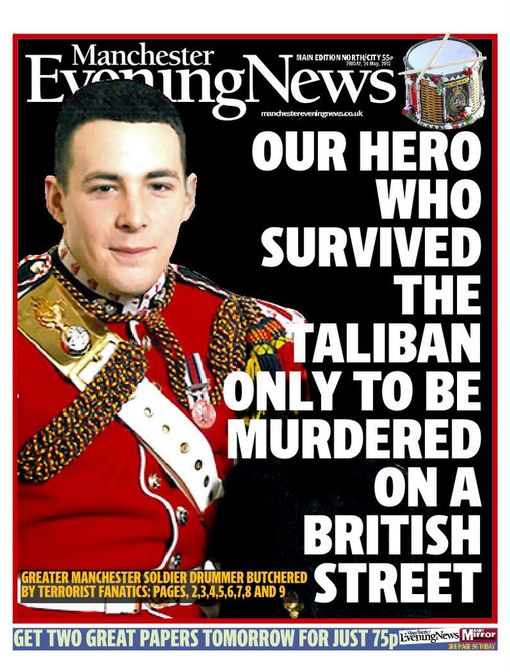 LEE RIGBY, age 25, was hacked to death on a street in London, England on Wed. May 22, 2013. This soldier of the Woolwich Barracks, belonged to the 2nd Battalion of Fusliers.  The community gathered at St Peter the Apostle Church, Woolwich, to offer Mass on 25th May 2013 for him. Bishop Patrick presided at the Mass. Prayers were offered for the Rigby's soul and for his family.
According to the family, "He was a loving son, husband, father, brother, and uncle, and a friend to many". Two men are in custody are suspected of hitting him with a car and then attacking him with a meat cleaver and knives. It is believed that this was a attack motivated by Muslim extremists. Rigby leaves behind his 2-year-old son, Jack and wife. A video by a witness shows an attacker named Michael Adebolajo, with hands covered in blood saying "We swear by almighty Allah we will never stop fighting you. The only reason we have done this is because Muslims are dying every day."

Just so sad to here. Here is an update on St. Sharbel. A few weeks ago at St. Sharbel Maronite Catholic Church, in Las Vegas, a statue of St. Sharbel started to "bleed oil" after 2 visiting priests from Mexico, said Mass there. Not a hoax. I visited the statute myself and saw the oil pouring from the head and over the chest and arms. The statue is being guarded by the Knights of Columbus 24/7 for its protection. If your ever in Las Vegas, you can see the statute at St. Sharbel Maronite Catholic Church.