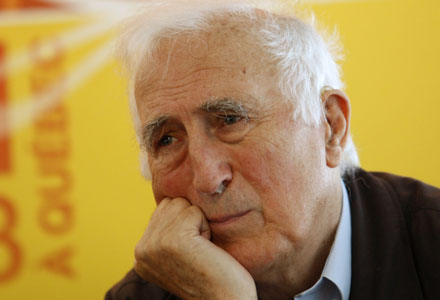 Jean Vanier pictured in 2008 (Photo: CNS)
Jean Vanier, founder of L’Arche, an international federation of communities where people with and without intellectual disabilities share life together, is to receive the Pacem in Terris Peace and Freedom Award.
For the first time in its history the US-based award is being taken overseas, to France, where Bishop Martin Amos of Davenport, Iowa, will present the award to Vanier in the village where he founded L’Arche in 1964.
The award honours Pope John XXIII and commemorates his 1963 encyclical letter Pacem in Terris (“Peace on Earth”). Previous award recipients include John F Kennedy (posthumously), the Rev Martin Luther King Jr, Mother Teresa, Dorothy Day, Cardinal Joseph Bernardin, Archbishop Desmond Tutu, Cesar Chavez, Sister Helen Prejean and Lech Walesa.
“As [the late] Bishop Gerald O’Keefe said, ‘We don’t honour them, they honour us,’” said Mgr Marvin Mottet, a founder and recipient of the award established in 1964 by the Davenport Catholic Interracial Council.
A celebration will be held at August 25 at St Ambrose University in Davenport to honour Vanier and L’Arche, which has a community in Clinton called The Arch. Bishop Amos, who spent an evening with The Arch community, plans to participate in the celebration along with Clinton and US L’Arche members.
“I have always known about the L’Arche communities from my time in Cleveland. This is the first time I have visited a community,” said Bishop Amos. “Eating a meal with the core members, one of their assistants and their interim community leader was an experience of God’s presence. I look forward to meeting with the man who first saw this presence of God over 50 years ago.
“Giving Jean Vanier the peace award draws attention to our efforts in L’Arche to live in peace,” said Franciscan Sister Maria Zeimen, interim community leader of The Arch. “Part of the mission of L’Arche is to work together toward a more human society. We try to do that in L’Arche by living together as brothers and sisters.
“No matter how different we are in age, gender, religion, nationality, intellectually or socially, we recognize the unique value of each person and that we have need for one another. Since we have 140 L’Arche communities around the world, we give witness to that worldwide.”
Vanier, who no longer travels overseas, believes it is important that a ceremony be held in the United States where L’Arche feels honoured by the award. It isn’t about him, but about the vision of L’Arche, which is being lived out in so many countries and particularly in the United States, a representative of Vanier said in an email.
“We in L’Arche in the United States are so grateful to hear that Jean Vanier has been named for this honour,” said Joan Mahler, who leads L’Arche USA. “Jean has devoted his life to peacemaking. In his many books and talks – and more importantly, in how he lives his life each day – Jean teaches us that our fragilities and weaknesses can be pathways to peace when acknowledged and shared with loving compassion.”
L’Arche was born of Vanier’s desire to do good for people with disabilities, but in sharing life with them he discovered how much they enriched his life.
“The desire to live together, not as ‘educators’ and people with disabilities, but as sharers in a life of communion, highlighted by contrast the great gulf more often fixed in our divided world between the strong and the weak, the powerful and the vulnerable, the clever and the disabled, between those with a voice in human affairs and those with none,” wrote Vanier’s biographer, Kathryn Spink, in The Miracle, The Message, The Story.
The Canadian, who gave up a promising career as a naval officer, considered the priesthood and then a career as a university professor, found his true vocation at L’Arche. Described as a gifted retreat leader and speaker who recognised his own failings and weaknesses, Vanier inspired countless individuals worldwide to embrace L’Arche and to bring it to fruition in 40 different countries.
Vanier, 84, still lectures almost daily in retirement and continues to lead retreats and train young assistants, said Dan Ebener, director of stewardship and planning at the Diocese of Davenport.
Kent Ferris, diocesan social action director, said: “Pacem in Terris Award recipients always seem to have relevancy for the year they are honoured.
“Maybe during this Year of Faith, this is our reminder to love gently.”
SHARED FROM CATHOLIC HERALD
Posted by Jesus Caritas Est at 3:21 PM