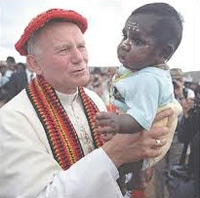 1986 address by Pope John Paul II to Indigenous people in Alice Springs has lost none of its impact
When parishes, schools, churches and communities across Australia join together to commemorate Aboriginal and Torres Strait Islander Sunday on 7 July the message is one of hope and reconciliation. There is also good reason to celebrate with latest statistics revealing that young Indigenous Catholics are the Church's fastest growing demographic in Australia.
"Between 1991 and 2011 the Aboriginal and Torres Strait islander Catholic population has increased from 62,000 to 125,000. This  represents a growth of more than 105%," says Craig Arthur, National Administrator of the NATSICC (National Aboriginal and Torres Strait Islander Catholic Council).
Even more interesting is that this fast growing demographic has an average age of 21.5 more than 16 years younger when compared with the current median age for all Catholics across Australia.
"We knew there has been a surge in our young people proclaiming their faith and becoming involved with the Church but I don't think until the release of these statistics by the Pastoral Research Office of the Australian Catholic Bishops Conference (ACBC) that any of us realised the extent to which this is happening," he says.
Young Australians from all cultures are increasingly responding to initiatives such as World Youth Day and the New Evangelisation and embracing or re-embracing their faith. For many growing up in a secular society and a celebrity dominated media, the search for truth and need to find real meaning in their life through Christ has become increasingly important, Craig says. 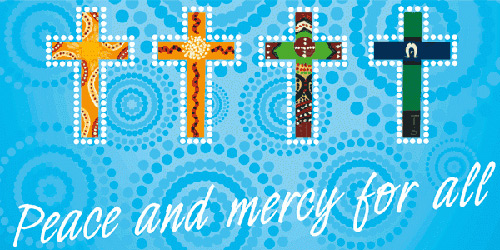 Peace and Mercy for All is the theme of this year%27s Aboriginal and Torres Strait Islander Sunday
But he believes with young Indigenous Australians, the Catholic faith is also offering them hope as they struggle under the Government's Intervention which has been in place for six years and on 1 July will be further expanded from the Northern Territory to other areas of Australia, including Bankstown in Sydney.
Under the Intervention or the Northern Territory Emergency Response (NTER) Aboriginal and Torres Strait Islander communities have been disempowered, their social welfare payments quarantined and forced onto Income Management Schemes. These measures have been taken by politicians and bureaucrats in Canberra with little consultation with community elders or the involvement of affected communities.
"Aboriginal and Torres Strait Islander peoples not only have a rightful place in Australian society but they have a uniquely important contribution to make that will enrich our lives, our nation and our Church," says Bishop Christopher Saunders, Bishop of Broome and Chair of the Australian Catholic Social Justice Council and member of the Bishops Commission for Relations with Aborigines and Torres Strait Islanders. 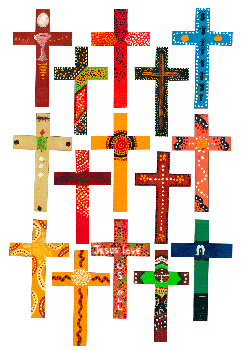 Aboriginal and Torres Strait Islander Sunday will be celebrated across Australia on 7 July
In his message written for Aboriginal and Torres Strait Islander Sunday entitled "Living the Gospel of Hope," Bishop Saunders doesn't mince words when it comes to acknowledging how Indigenous people have been treated dating back to earliest Colonial times, nor does he shy away from admitting that the advent of Christianity, historically speaking, among Australia's Indigenous peoples "has not always been good news."
"There are of course numerous instances of just and heroic work undertaken among Aboriginal people by missionaries. In some places, Aboriginal people would have simply died out had no missionaries intervened with various care and support, and advocated for their protection," he says.
The Bishop says it is also manifest that some missionaries of various creeds behaved less than honourably in the conduct of their duties, and is concerned that "even in today's world, a minority persists in a view of Aboriginal people that is not at all welcoming and embracing."
But he also points to numerous instances of heroic work undertaken among Aboriginal people by missionaries where in some instances Aboriginal people may have simply died out had not these religious men and women intervened and given them their care and support, as well as advocate on their behalf.
"The address of Pope John II in 1986 to the Aboriginal and Torres Strait Islander people in Alice Springs has lost nothing of its impact," Bishop Saunders says.
On that day in Alice Springs Blessed John Paul reminded those present that "the Gospel of our Lord Jesus Christ speaks all languages. It esteems and embraces all cultures. It supports them in everything human and when necessary, it purifies them. Always and everywhere the Gospel uplifts and enriches cultures with the revealed message of a loving and merciful God. That Gospel now invites you to become, through and through, Aboriginal Christians."

Bishop Christopher Saunders, Chair of the Australian Catholic Social Justice Council
Taking the theme "Peace and mercy for all " this year's Aboriginal and Torres Strait Islander Sunday will not only celebrate the 25th anniversary of its inclusion in the official calendar of the Australian Catholic Church, but is reaching out to all parishes and schools across Australia in the spirit of mutual understanding, support and reconciliation.
"For the first time in preparing this year's liturgy and resource kit, we have included youth activities for both primary and secondary school students and these along with the kits have gone out to every one of Australia's 1700-plus Catholic schools, " says Craig Arthur of NATSICC.
Similar kits have also been sent to parishes along where church groups and parishioners are being encouraged to contact their local Aboriginal Catholic Ministry (ACM).
"We are a national body but the ACMs in every diocese across Australia are the ones who are the heart and soul of the movement and who with parishes can help build relations, foster understanding and give each other mutual support," he says.
Liturgy resources and youth activities along with special group reflections, clipart for youngsters and the meaning behind traditional Aboriginal ceremonies can be downloaded from NATSICCs website atwww.are available by logging on to http://www.natsicc.org.au/resources/liturgy

Shared from Archdiocese of Sydney