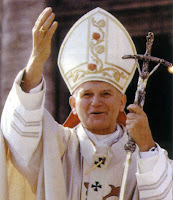 U.S. Bishops voted to ask Vatican to add pope to U.S. calendar last November
Vatican stresses John Paul's zeal for families, youth, the sick
Notes his promotion of the Catechism of the Catholic Church, New Canon Law Code
WASHINGTON—The Vatican Congregation for Divine Worship has approved insertion of the optional memorial of Blessed John Paul II in the proper calendar of the dioceses of the United States. It also has provided the proper liturgical texts for observance of the Memorial in the Mass and Divine Office. Liturgical prayers and readings for the feast can be found at: http://www.usccb.org/about/leadership/holy-see/pope-john-paul-ii/memorial-of-blessed-john-paul-ii.cfm
The U.S. bishops last November voted overwhelmingly to request the addition of the popular pope, who reigned for 27 years, into the U.S. liturgical calendar.
The Office of Readings includes an excerpt from Pope John Paul's homily at his inauguration as pope in 1978, when he stressed "Do not be afraid, Open, I say open wide the doors for Christ." The message became one of the signature statements of his papacy.
The biographical piece in the Divine Office highlights the pope's pastoral visits around the world, his participation in the Second Vatican Council, and his zeal for families, young people and the sick. It also noted his promotion of the Catechism of the Catholic Church and the new Code of Canon Law.
SHARED FROM CATHOLIC BISHOPS CONFERENCE OF USA

BLESSED JOHN PAUL II, POPE
CONGREGATION FOR DIVINE WORSHIP AND THE DISCIPLINE OF THE SACRAMENTS

Charles Joseph Wotjtyła was born in 1920 in Wadowice, Poland. After his ordination to the priesthood and theological studies in Rome, he returned to his homeland and resumed various pastoral and academic tasks. He became first auxiliary bishop and, in 1964, Archbishop of Krakow and took part in the Second Vatican Council. On 16 October 1978 he was elected pope and took the name John Paul II. His exceptional apostolic zeal, particularly for families, young people and the sick, led him to numerous pastoral visits throughout the world. Among the many fruits which he has left as a heritage to the Church are above all his rich Magisterium and the promulgation of the Catechism of the Catholic Church as well as the Code of Canon Law for the Latin Church and for the Eastern Churches. In Rome on 2 April 2005, the eve of the Second Sunday of Easter (or of Divine Mercy), he departed peacefully in the Lord.
1. Common of Pastors: For a Pope. Office of readings
2. Second reading

From the Homily of Blessed John Paul II, Pope, for the Inauguration of his Pontificate
(22 October 1978: AAS 70 [1978], 945-947)
Do not be afraid. Open wide the doors for Christ.
Peter came to Rome! What else but obedience to the inspiration received from the Lord could have guided him and brought him to this city, the heart of the Empire? Perhaps the fisherman of Galilee did not want to come here. Perhaps he would have preferred to stay there, on the shores of Lake of Genesareth, with his boat and his nets. Yet guided by the Lord, obedient to his inspiration, he came here!
According to an ancient tradition, Peter tried to leave Rome during Nero’s persecution. However, the Lord intervened and came to meet him. Peter spoke to him and asked. “Quo vadis, Domine?” — “Where are you going, Lord?” And the Lord answered him at once: “I am going to Rome to be crucified again.” Peter went back to Rome and stayed here until his crucifixion.
Our time calls us, urges us, obliges us, to gaze on the Lord and to immerse ourselves in humble and devout meditation on the mystery of the supreme power of Christ himself.
He who was born of the Virgin Mary, the carpenter’s Son (as he was thought to be), the Son of the living God (as confessed by Peter), came to make us all “a kingdom of priests”.
The Second Vatican Council has reminded us of the mystery of this power and of the fact that Christ’s mission as Priest, Prophet-Teacher and King continues in the Church. Everyone, the whole People of God, shares in this threefold mission. Perhaps in the past the tiara, that triple crown, was placed on the Pope’s head in order to signify by that symbol the Lord’s plan for his Church, namely that all the hierarchical order of Christ’s Church, all “sacred power” exercised in the Church, is nothing other than service, service with a single purpose: to ensure that the whole People of God shares in this threefold mission of Christ and always remains under the power of the Lord; a power that has its source not in the powers of this world, but instead in the mystery of the Cross and the Resurrection.
The absolute, and yet sweet and gentle, power of the Lord responds to the whole depths of the human person, to his loftiest aspirations of intellect, will and heart. It does not speak the language of force, but expresses itself in charity and truth.
The new Successor of Peter in the See of Rome today makes a fervent, humble and trusting prayer: Christ, make me become and remain the servant of your unique power, the servant of your sweet power, the servant of your power that knows no dusk. Make me a servant: indeed, the servant of your servants.
Brothers and sisters, do not be afraid to welcome Christ and accept his power. Help the Pope and all those who wish to serve Christ and with Christ’s power to serve the human person and the whole of mankind.
Do not be afraid. Open, I say open wide the doors for Christ. To his saving power open the boundaries of states, economic and political systems, the vast fields of culture, civilization and development. Do not be afraid. Christ knows “that which is in man”. He alone knows it.
So often today, man does not know that which is in him, in the depths of his mind and heart. So often he is uncertain about the meaning of his life on this earth. He is assailed by doubt, a doubt which turns into despair. We ask you, therefore, we beg you with humility and with trust, let Christ speak to man. He alone has words of life, yes, of life eternal.
Responsory
R/. Do not be afraid. The Redeemer of mankind has revealed the power of the Cross and has given his life for us. * Open, open wide the doors for Christ.

V/. In the Church we are called to partake of his power. * Open, open wide the doors for Christ.
Oration
O God, who are rich in mercy and who willed that the blessed John Paul the Second should preside as Pope over your universal Church, grant, we pray, that instructed by his teaching, we may open our hearts to the saving grace of Christ, the sole Redeemer of mankind. Who lives and reigns.

Common of Pastors: For a Pope.
Collect

O God, who are rich in mercy
and who willed that the blessed John Paul the Second
should preside as Pope over your universal Church,
grant, we pray, that instructed by his teaching,
we may open our hearts to the saving grace of Christ,
the sole Redeemer of mankind.
Who lives and reigns.
SOURCE AND OTHER LANGUAGES:
Liturgical Prayers and Readings
Propers: English. . . | Latin. . . | Spanish. . .
Office of Readings: English. . . | Latin. . . | Spanish. . .
Posted by Jesus Caritas Est at 9:03 AM