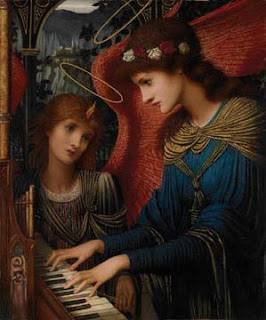 The name of St. Cecilia has always been most illustrious in the church, and ever since the primitive ages is mentioned with distinction in the canon of the mass, and in the sacramentaries and calendars of the church. Her spouse Valerian, Tiburtius, and Maximus, an officer, who were her companions in martyrdom, are also mentioned in the same authentic and venerable writings. St. Cecilia was a native of Rome, of a good family, and educated in the principles and perfect practice of the Christian religion. In her youth she by vow consecrated her virginity to God, yet was compelled by her parents to marry a nobleman named Valerian. Him she converted to the faith, and soon after gained to the same his brother Tiburtius. The men first suffered martyrdom, being beheaded for the faith. St. Cecilia finished her glorious triumph some days after them. Their acts, which are of very small authority, make them contemporary with Pope Urban I, and consequently place their martyrdom about the year 230, under Alexander Severus; others, however, place the triumph of these martyrs under Marcus Aurelius, between the years 176 and 180. Their sacred bodies were deposited in part of the cemetery of Calixtus, which part, from our saint, was called St. Cecilia's cemetery. Mention is made of an ancient Church of St. Cecilia in Rome in the fifth century, in which Pope Symmachus held a council in the year 500. This church being fallen to decay, Pope Paschal I began to rebuild it; but was in some pain how he should find the body of the saint, for it was thought that the Lombards had taken it away, as they had many others from the cemeteries of Rome, when they besieged that city under King Astulphus in 755. One Sunday, as this pope was assisting at matins as was his wont, at St. Peter's, he fell into a slumber, in which he was advertised by St. Cecilia herself that the Lombards had in vain sought for her body, and that he should find it; and he accordingly discovered it in the cemetery called by her name, clothed in a robe of gold tissue, with linen cloths at her feet, dipped in her blood. With her body was found that of Valerian, her husband; and the pope caused them to be translated to her church in the city; as also the bodies of Tiburtius and Maximus, martyrs, and of the popes Urban and Lucius, which lay in the adjoining cemetery of Praetextatus, on the same Appian road. This translation was made in 821. Pope Paschal founded a monastery in honour of these saints, near the Church of St. Cecilia, that the monks might perform the office day and night. He adorned that church with great magnificence, and gave to it silver plate to the amount of about nine hundred pounds—among other things a ciborium, or tabernacle, of five hundred pounds weight; and a great many pieces of rich stuffs for veils and such kinds of ornaments; in one of which was represented the angel crowning St. Cecilia, Valerian, and Tiburtius. This church, which gives title to a cardinal priest, was sumptuously rebuilt in 1599 by Cardinal Paul Emilius Sfondrati, nephew to Pope Gregory XIV, when Clement VIII caused the bodies of these saints to be removed under the high altar, and deposited in a most sumptuous vault in the same church called the Confession of St. Cecilia; it was enriched in such a manner by Cardinal Paul Emilius Sfondrati as to dazzle the eye and astonish the spectator. This church of St. Cecilia is called In Trastevere, or Beyond the Tiber, to distinguish it from two other churches in Rome which bear the name of this saint.
St. Cecilia, from her assiduity in singing the divine praises (in which, according to her Acts, she often joined instrumental music with vocal), is regarded as patroness of church music. The psalms, and many sacred canticles in many other parts of the holy scripture, and the universal practice both of the ancient Jewish and of the Christian church, recommend the religious custom of sometimes employing a decent and grave music in sounding forth the divine praises. By this homage of praise we join the heavenly spirits in their uninterrupted songs of adoration, love, and praise. And by such music we express the spiritual joy of our hearts in this heavenly function, and excite ourselves therein to holy jubilation and devotion.
SOURCE: http://www.ewtn.com/saintsHoly/saints/C/stcecilia.asp
Posted by Jesus Caritas Est at 10:00 AM