MAN SET HIMSELF ON FIRE IN FRONT OF VATICAN 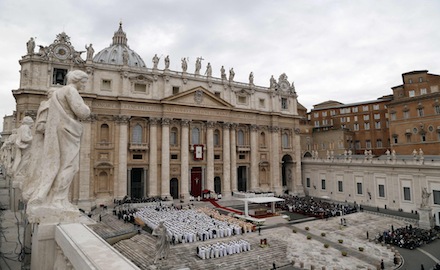 The Vatican said that the motive was unknown (CNS)
A man set himself on fire this morning in St Peter’s Square.
A Jesuit priest tried to smother the flames with a jacket after the 51 year-old man doused himself in gasoline and set himself alight.
Police officers managed to put out the flames with fire extinguishers and are now being treated for smoke inhalation and injuries to their hands in hospital.
The man is understood to be suffering from serious burns to the upper part of his body.
The Vatican said that the motive for his actions is unknown.
SHARED FROM CATHOLIC HERALD