Vatican Radio REPORT This Sunday pilgrims and tourists walked around St Peter’s Square without hearing the traditional recitation of the Angelus by the Pope. The Church is now in the period of the Sede Vacante or Vacant See.

Before his resignation Pope Emeritus Benedict the XVI recited the Angelus 455 times on Sunday over the course of his Pontificate.

Posted by Jesus Caritas Est at 12:35 PM No comments:

PRAYER FOR SEDE VACANTE - FOR A NEW POPE

JOURNEY OF A BISHOP REPORT 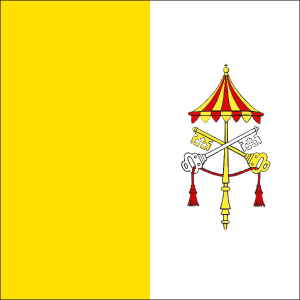 The period between Pope Benedict's resignation (February 28 at 2PM, EST) until the election of his successor later this month is know as "Sede vacante", literally with the Chair [of St. Peter] vacant.

Instead of the papal coat of arms being posted on Vatican letterhead, buildings, etc., the above heraldic representation is used. Let us rememeber to keep Pope Benedict in our prayers, as well as the Cardinals who will begin their sessions and congregations tomorrow morning and afternoon until they are ready to set a date for the Conclave to start.

Here is a prayer provided by the Knights of Columbus that is suitable for this period:

O Lord Jesus Christ, Supreme Pastor of Your Church, we thank you for the ministry of Pope Benedict XVI and the selfless care with which he has led us as Successor of Peter, and Your Vicar on earth.

Good Shepherd, who founded Your Church on the rock of Peter’s faith and have never left Your flock untended, look with love upon us now, and sustain Your Church in faith, hope, and charity.

Grant, Lord Jesus, in Your boundless love for us, a new Pope for Your Church who will please You by his holiness and lead us faithfully to You, who are the same yesterday, today, and forever. Amen.
SHARED FROM ARCHBISHOP PRENDERGRAST
Posted by Jesus Caritas Est at 12:30 PM No comments:

Posted by Jesus Caritas Est at 10:48 AM No comments:


source: http://www.ewtn.com/saintsHoly/saints/K/stkatharinedrexel.asp#ixzz1o3ZjDKfN
Posted by Jesus Caritas Est at 10:44 AM No comments: A heavily guarded police station in Peshawar
Journalists today demanded extra security after a correspondent working for a private news channel was gunned down in a tribal area known to be a hotbed of Taliban and al-Qaeda activity.
Malik Mumtaz Khan was shot dead in the town of Miranshah, North Waziristan, on Wednesday as he was returning home. No one has so far claimed responsibility for the killing.
“Reporting in these areas has become a major threat. We are not against anybody and simply portray reality, but our worries increase when no killers are arrested,” said Pervez Iqbal, a Peshawar-based reporter.
Many districts in North Waziristan are considered no-go areas and strongholds of al-Qaeda and the Taliban. Thousands of local people have still to return home after fleeing military operations against the militants launched in 2009.
“Armed militants interrogate and abuse us at checkpoints when we go there. Local connections, not language, can save you,” said Iqbal, who has been a reporter for more than three decades.
Pakistan has been ranked the most dangerous country for journalists in South Asia, according to a report by the South Asia Media Commission.
Of the 25 journalists killed in South Asia last year, 13 were from Pakistan, the report states.
The Human Rights Commission of Pakistan has condemned Mumtaz Khan’s murder.
“There is a continuation of a disturbing trend of increasing violence against journalists. The fact that Mumtaz is the fifth journalist to be killed in the first two months of 2013 highlights the vulnerability and the threats those in the journalism profession face,” commission chairman Zohra Yusuf said on Thursday.
“This murder and past episodes are direct attacks on freedom of the media. The response of both the federal and provincial governments has been completely inadequate as journalists continue to be attacked with impunity,” he said in a statement.
“We call upon the government to bring the culprits to justice and further take all necessary measures to guarantee the safety of journalists in order to allow … them to work freely and without intimidation.”
SHARED FROM UCAN NEWS
Posted by Jesus Caritas Est at 10:40 AM No comments: Father Maurizio Pettena Director of the Australian Catholic Migrant and Refugee Office
The serious allegations against one asylum seeker should not be grounds to treat all asylum seekers as criminals, says Father Maurice Pettenà, Director of the Australian Catholic Migrant and Refugee Office (ACMRO).
Referring to the arrest this week of an asylum seeker for an alleged sexual assault on a female student at the Macquarie University, Fr Pettanà says it is deeply concerning that the arrest has been followed by calls to stop allowing men, women and children seeking asylum to live within the community on bridging visas while awaiting assessment of their applications for resettlement as refugees.
"ACMRO fully supports the current Government policy of hosting asylum seekers in the community and have great respect for the decision to increase Australia's humanitarian intake to 20,000 each year," he says.
"Asylum seekers are not criminals and should not be treated as such," he insists and reiterated one ACMRO's commitment to defend the right of all people to seek asylum.

"The hosting of asylum seekers in the community is an entirely appropriate, effective and humane way for Australia to respond," he says. Refugees often live in appalling conditions and risk their lives on boats in a bid to find safety and a future
Citing the thousands of Australians who have volunteered their time, energy and compassion to helping asylum seekers, he pointed to the warm and ongoing friendships that had developed between the new arrivals and those who were helping them rebuild their lives and be welcomed as contributing members of local communities.
"Helping asylum seekers in settle into the community and offering the hand of friendship is both a joy and a wonderful gift for Catholics," he says and quotes from the Book of Matthew 25:40: "Whatever you did for one of the least of these brothers and sisters of mine, you did for me."

Having listened to story after story from many families and individuals and the terrible misery and violence suffered before being forced to flee war torn countries and persecution, Fr Pettenà says "it is heartbreaking witness in which the hostile way asylum seekers are treated once they arrive in Australia." Behind high fences and razor wire on Manus where asylum seekers including children may be forced to stay for five years or more
"The fact remains that current policies on boarder control are already too tough," he claims and points out that in the past three years alone the Government's continued use of mandatory and indefinite immigration detention has resulted in several suicides and countless self-harm incidents, many of which involve children.
"On top of this children and families continue to be detained in remote regional areas and more recently on Nauru and Manus Island under appalling conditions" he says and describes calls for a further toughening of asylum seeker policy "incredibly disappointing."
"The calls for even harsher treatment of asylum seekers who land on our shores seeking a safe haven reflects a policy of fear pursued at the expense of human dignity and the moral obligation to afford protection for the most vulnerable," he says.
SHARED FROM ARCHDIOCESE OF SYDNEY
Posted by Jesus Caritas Est at 10:15 AM No comments:

ASIA NEWS REPORT
The arrest came after a complaint by some Islamists annoyed at Christian images carried by the group of Egyptians, all street and market vendors in Benghazi. Each one forced to shave their head in punishment. For the authorities, they are illegal immigrants and their detention has nothing to do with religion.

Benghazi (AsiaNews / Agencies) - Islamists in Benghazi continue their hunt of Christian workers in the country accusing them of proselytism. The latest case concerns the arrest of 48 Egyptian Coptic Orthodox traders arrested last week in the capital of Cyrenaica. They were detained after a complaint by some Libyans, suspicious of the religious imagery on the vendors boards and stalls in the market of Benghazi. In a video immediately seized by police they appear locked in a small room watched over by men who have the typical beard worn by Salafists (see photo). From the pictures the 48 appear in an obvious state of physical deterioration, many show bruises and abrasions. Each of them had their head shaved.

The case has sparked outrage among the population of Benghazi, which in October rose up against the Salafi militias accused of having organized the attack on the U.S. consulate in which Ambassador Christopher Stevens was killed. Yesterday, the authorities issued a statement in which they declare that the hawkers were arrested for violating immigration laws and not for religious reasons. However, this is yet another case of discrimination against Christians living in Libya. In mid-February four foreigners - an Egyptian, a South African, a South Korean and a Swede with a U.S. passport - were arrested on charges of distributing Bibles and other religious material.

The spread of Islamic extremism is also affecting the Catholic religious orders present for decades on Libyan territory, engaged in hospital work and looking after the elderly. In January, the Islamists prompted the flight of the Franciscan Sisters of the Infant Jesus from Barce and the Ursuline Sisters of the Sacred Heart of Jesus from Beida. In October instead it was the turn of nuns from the Convent of the Holy Family of Spoleto in Derna, forced to leave Libya due to continuous threats from Islamic extremists, despite the opposition of the inhabitants of the city.

SHARED FROM ASIA NEWS IT
Posted by Jesus Caritas Est at 10:12 AM No comments: