Posted by Jesus Caritas Est at 4:51 PM No comments:

Julia Nickson, France Nuyen, James Shigeta
Based on a true story from the 1950s, a girl, Sung Neng Yee, of a wealthy Chinese family. She is eager to become part of Mao Tze Tung's society, but everything changes when her family becomes poor. She is taken to a labour camp, of Colonel Cheng. Christianity during China's revolution.
Posted by Jesus Caritas Est at 4:33 PM No comments:

ASIA NEWS REPORT;
by Santosh DigalA nun, 28, was abducted and raped for a week. One of her cousins is among the attackers. For the archbishop of Cuttack-Bhubaneshwar, "The perpetrators must be brought to justice [. . .]. What happened is a disgrace".

Bhubaneshwar (AsiaNews) - A 28-year-old nun was kidnapped and raped for a week by a group of men in Bamunigam, Kandhamal District (Orissa). She was held between 5 and 11 July, but the case was made public only today. "The perpetrators must be brought to justice without delay and the law must take its course. What happened is a disgrace," said Mgr John Barwa SVD, archbishop of Cuttack-Bhubaneshwar, who condemned the attack.
The nun, a Kandhamal native, lives in Chennai (Tamil Nadu), where she is studying in college. According to her testimony to police, she received a phone call from a woman about two weeks ago, who reported that her mother was very sick.
On 5 July, she took a train to Bamunigam, where two cousins ​​and some friends were waiting to take her home. However, rather than take her to the village of Minapanka, the men led her to a still unidentified place. Here the sister was gang raped for a week.
On 11 July, the attackers left the sister at Berhampur train station, threatening her not to tell anyone about what had happened. The victim managed to reach her village where on 13 July she filed an official complaint.
For now, police arrested her cousin, Jotindra Sobhasundar, and Tukuna Sobhasundear, a friend. The other attackers are nowhere to be found.
The nun received medical assistance and tomorrow her superior will visit her.

According to her brother, the violent act might have been triggered by "family reasons".Last year, an uncle was killed by Maoist guerrillas, and his children (the nun's cousins) accused her family of being involved in the murder.
SHARED FROM ASIA NEWS IT
Posted by Jesus Caritas Est at 3:00 PM No comments: 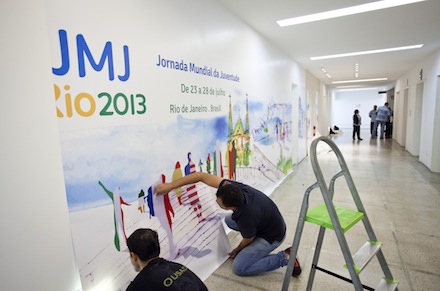 World Youth Day volunteers put up a poster in a building in Rio (CNS)
More than 200 World Youth Day volunteers will be dedicated to helping pilgrims with special needs during the July 23-28 event in Rio de Janeiro.
Cesar Bacchim, who is working on accessibility for World Youth Day, said pilgrims with audio, visual, intellectual and mobility deficiencies will have a special place at the front of main celebrations “so that they can participate in the celebration and not be a mere spectator”.
The local committee has prepared special structures to receive disabled pilgrims at the main events at Copacabana beach and vigil at Campus Fidei, in Rio’s Guaratiba area, including special bathrooms and food stands with braille menus.
A team of mechanics will be on hand at the vigil site in case of wheelchair malfunctions, but pilgrims will be expected to walk or be pushed on their wheelchairs along the eight-mile route to get there.
“All of this information will be provided to the pilgrims in their Pilgrim Kit, which will include a map of where we have reserved a special area for those who need a little more help to participate,” Bacchim said. He added that areas reserved for pilgrims with disabilities will be marked by a tall pole with the universal disability access symbol.
“Unfortunately, Rio de Janeiro is not a disability friendly city,” Mr Bacchim said, noting that public transportation for those in wheelchairs is sometimes difficult.
He said such problems could be offset by the hospitality of Rio residents and the youths participating in the event.
“In an event like this, everyone helps each other out,” added Mr Bacchim.
By early July, 1,000 pilgrims with disabilities had registered for World Youth Day, but the local organising committee said it was receiving new registrations daily. Mr Bacchim said Brazil and the United States had the greatest number of registered pilgrims with disabilities.
SHARED FROM CATHOLIC HERALD CO UK
Posted by Jesus Caritas Est at 2:59 PM No comments:

INAUGURAL MASS FOR WORLD'S INDIGENOUS WITH CARDINAL PELL IN AUSTRALIA 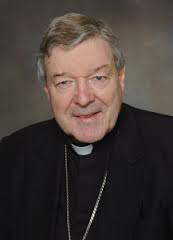 Cardinal Pell has long championed the rights of Australia's first peoples and will lead the celebrations at St Mary's Cathedral on 9 August
Prime Minister Kevin Rudd, NSW Premier Barry O'Farrell, leading Aboriginal elders from across Sydney and more than 1000 Indigenous students from Sydney's Catholic schools will attend an inaugural Mass at St Mary's Cathedral on Friday 9 August to celebrate the International Day of the world's Indigenous Peoples.
The Archbishop of Sydney, Cardinal George Pell who has long been a champion of the rights of Aboriginal and Torres Strait Islander peoples will lead the celebration in what will become an annual event.
Hosted by the Archdiocese of Sydney's Catholic Education Office, the Mass represents the first time Indigenous students from Sydney's Catholic systemic schools have gathered to celebrate this special day.
His Eminence has requested St Mary's Cathedral Choir be supported by professional Aboriginal artists and the repertoire for the Mass will include some sections sung in some of the many Aboriginal languages. In addition Aboriginal and Torres Strait Islander students attending the Mass will be encouraged celebrate the day in prayer, song and dance.
"This will be the first time all Aboriginal and Indigenous students at our schools will gather together for Mass on this significant day," says Sue Sinko, Manager of Aboriginal Education for Kindergarten to Year 12 students at the city's 149 Catholic schools. 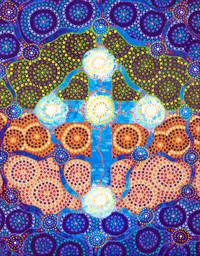 Beautifully illustrated prayer card by Lisa Buxton for the Indigenous Peoples Mass
Sue, who is helping to organise the Mass at St Mary's Cathedral to mark the occasion says one of the key aims will be to show respect to Australia's first people, celebrate their culture, history and the rich contribution they make to the Church of Australia, and to help build bridges between Indigenous and non Indigenous Australians.
In recent years Sydney's Catholic schools have seen a surge in enrolments by Aboriginal and Torres Strait Islander students with 2013 hitting an all time high.
Not only are there just under 1000 Indigenous students currently enrolled at Catholic schools in Sydney but young Aboriginal teenagers are among the fastest growing demographic in the Catholic Church of Australia.
In addition to the Mass at St Mary's Cathedral on 9 August, all primary and secondary schools will simultaneously mark the day with their own prayer services in their local communities. This services will expand on the theme, "Holy Spirit in This Land" which is also the theme of the Cathedral's inaugural Mass. 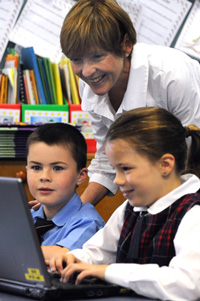 Assistant Principal of St Andrew's Primary at Malabar, Marita Wells where one third of the youngsters are Indigenous
Sue Sinko says plans are underway so each of Sydney's 67,281 Catholic students will receive a Prayer Card featuring the original artwork of Lisa Buxton, Aboriginal Education Adviser with the Sydney Education Office.
In the past week students at St Andrew's Catholic College, Malabar have also participated in NAIDOC Week which ran from 7-14 July this year and celebrates Aboriginal and Torres Strait Islander history, culture and achievements.
Of the 393 children enrolled at St Andrews, one third are Aboriginal.
"We are very proud of our Indigenous links," says Louise O'Keeffe, St Andrew's Principal. "We have a long history of breaking down cultural barriers and one of the biggest weeks of the year for us is NAIDOC week which we celebrate not only with the school but with the local community."
Communities across the globe will celebrate the International Day of the World's Indigenous Peoples on 9 August and for the first time, 1000 Aboriginal and Torres Strait Islanders from Sydney's Catholic schools will mark this significant day with a Mass celebrated in their honour by His Eminence, Cardinal Pell at St Mary's Cathedral.

SHARED FROM ARCHDIOCESE OF SYDNEY
Posted by Jesus Caritas Est at 2:57 PM No comments:

Tuesday of the Fifteenth Week in Ordinary Time
Lectionary: 390

A certain man of the house of Levi married a Levite woman,
who conceived and bore a son.
Seeing that he was a goodly child, she hid him for three months.
When she could hide him no longer, she took a papyrus basket,
daubed it with bitumen and pitch,
and putting the child in it,
placed it among the reeds on the river bank.
His sister stationed herself at a distance
to find out what would happen to him.

Pharaoh’s daughter came down to the river to bathe,
while her maids walked along the river bank.
Noticing the basket among the reeds, she sent her handmaid to fetch it.
On opening it, she looked, and lo, there was a baby boy, crying!
She was moved with pity for him and said,
“It is one of the Hebrews’ children.”
Then his sister asked Pharaoh’s daughter,
“Shall I go and call one of the Hebrew women
to nurse the child for you?”
“Yes, do so,” she answered.
So the maiden went and called the child’s own mother.
Pharaoh’s daughter said to her,
“Take this child and nurse it for me, and I will repay you.”
The woman therefore took the child and nursed it.
When the child grew, she brought him to Pharaoh’s daughter,
who adopted him as her son and called him Moses;
for she said, “I drew him out of the water.”

On one occasion, after Moses had grown up,
when he visited his kinsmen and witnessed their forced labor,
he saw an Egyptian striking a Hebrew, one of his own kinsmen.
Looking about and seeing no one,
he slew the Egyptian and hid him in the sand.
The next day he went out again, and now two Hebrews were fighting!
So he asked the culprit,
“Why are you striking your fellow Hebrew?”
But the culprit replied,
“Who has appointed you ruler and judge over us?
Are you thinking of killing me as you killed the Egyptian?”
Then Moses became afraid and thought,
“The affair must certainly be known.”

Pharaoh, too, heard of the affair and sought to put Moses to death.
But Moses fled from him and stayed in the land of Midian.

Will you be exalted to heaven?
You will go down to the netherworld.

For if the mighty deeds done in your midst had been done in Sodom,
it would have remained until this day.
But I tell you, it will be more tolerable
for the land of Sodom on the day of judgment than for you.”
Posted by Jesus Caritas Est at 2:55 PM No comments:


SOURCE: http://www.ewtn.com/saintsHoly/saints/O/ourladyofmountcarmel.asp#ixzz1SHWhSka7
Posted by Jesus Caritas Est at 7:14 AM No comments: