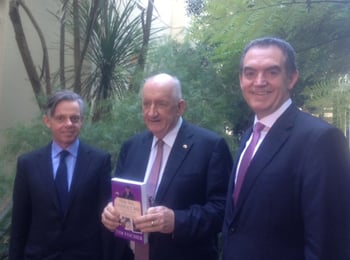 Michael Casey and Danny Casey from the Archdiocese of Sydney and Tim Fischer at his Sydney book launch
It is very rare to read a book but feel the author is talking directly to you with all the inflections, nuances and personal characteristics of that person.
This is certainly the case with Holy See, Unholy Me - tales from Tim Fischer's 1,000 days in Rome as Australia's first resident Ambassador to the Holy See
At his Sydney book launch at Mary MacKillop Place today Tim left no-one in doubt about the unique perspective he brought to the Holy See with his words of wit and wisdom.
The book provides a rare, fascinating and often humorous insight into the workings (and sometimes non- workings) of the Vatican by the former National Party Leader and Deputy Prime Minister who has always epitomised colour, movement and action.
This phase in Tim's life started with a phone call from the then, and again present, Prime Minister Kevin Rudd in July 2008. In January the following year he was launched into a new job which combined all his favourite things - politics, trains, food, faith, history,  Rome and of course family when they could visit.
He was both observer and active participant in a world of protocols and diplomacy. There were also other significant dimensions to his role.
In October 2012 Australia was to contest the ballot for a rotational seat on the United Nations Security Council. This would mean an intense four year campaign and Rome was seen as one of the hubs for this activity. 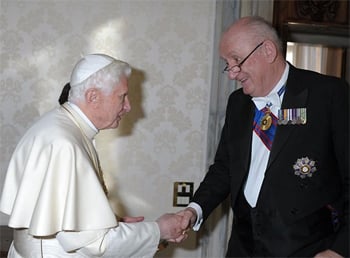 Ambassador Fischer meets Pope Benedict XVI
Australia had also become a key member of the G20, a pet project of the PM, but was the only country of this group that did not have a full-time resident ambassador to the Holy See.
Tim Fischer was certainly going to have his hands full.
As he navigated the world scene of religious and political leaders Tim became a popular and respected  ambassador around the Papal state, easily recognisable with his Black Akubra and welcoming, open presence.
As Tim writes in his book, no matter where an ambassador is in ninety-five different locations around the world, they are part of Team Australia and their job is to promote Australia, and the policies and priorities of the Australian Government.
In that sense Tim Fischer could well be seen as opening batsman and he stayed at the crease at the Vatican for three years.
Although a very experienced politician and administrator the skills Tim Fischer needed in his new position stretched from dinner party table-talk diplomacy to avoiding world leaders like Colonel Gaddafi and even cultivating a friendship with a robust Weimaraner.
When Tim Fischer arrived in Rome the former South Australian Senator Amanda Vanstone was Ambassador to Italy. A hard hitter and hard worker who scored a lot of goals for Australia, Amanda had brought her rather large dog, Gus to Rome. 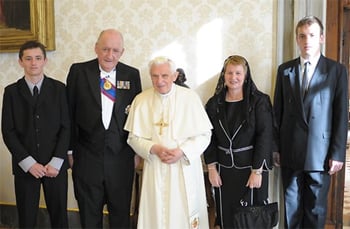 Pope Benedict meets Tim's family - Judy and sons Dominic and Harrison
As Tim writes Gus was also not without influence.
"Great Gus, a rather expressionful  Weimaraner, was allowed many liberties, and depending on your point of view he lent great life and colour to some diplomatic occasions - especially when becoming 'friendly' with the Pakistani Ambassador to Italy," Tim writes.
"Now, it has long been argued by Amanda that Gus did not try to eat the Pakistani Ambassador and definitely did not bite her; it was merely a nick. However, it is accepted that Gus did clash with the distinguished ambassador, who required tetanus and rabies shots immediately."
In re-telling this tale at the launch today Tim admitted the first draft required a slight rewrite. He was warned - Gus might sue!
Tim made friends easily in his role. Even the Swiss Guards got to know the affable Australian well. While others were often detained while careful identity examination took place, Tim would wave his Akubra and pass through to the Vatican City.
Getting to know who's who in the Vatican and the various diplomatic corps and missions put Tim on a fast and frenetic learning curve. And if he thought he had left politics behind in Australia then this was a whole new ball game with the Vatican often playing a vital role in "applying the glue of peace to delicate political processes". 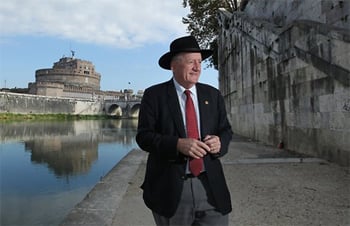 Tim with the recognisable Akubra beside the Tiber
His stories during this time are intriguing and revealing as well as highly entertaining.
Apart from Vatican city duties, Tim was also required to attend numerous conferences and missions on everything from trade and food security  to immigration, astronomy and interfaith dialogue. All with their various challenges.
However he admits one of the worst conferences by far was the week-long African Unity Conference, conducted in a huge tent with chandeliers near the Libyan capital of Tripoli. This was during the last hurrah of the Gaddafi regime in mid 2009. Countries were being encouraged to travel to Libya to "celebrate" the 40th anniversary of the Gaddafi-led revolution. Tim drew the short straw for Australia.
"I was given some specific instructions. I was to be seen to represent Australia, but was not to shake the hand of Gaddafi or be photographed with him," Tim writes.
The conferences was self-indulgent, mediocre and quite bizarre. While Tim made good contacts with other representatives he rose to the biggest challenge - giving Gaddafi the "brush-past" and avoiding a meeting or conversation.
Tim also writes of the role he and his staff played in preparing for and welcoming Australians for "The Canonisation of the Great Aussie Battler" - Mary MacKillop. 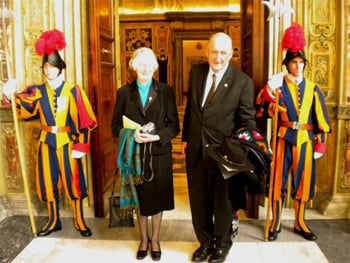 Sr Maria Casey, Postulator for the Cause of Canonisation for Mary MacKillop worked closely with Tim Fischer to achieve Australia's first saint
His efforts and work before, during and after this event were mammoth. Not only was his work behind the scenes vital  to the success of the canonisation but he always made himself available to the thousands of media requests at the time.
The big final occasion of Tim Fischer's posting was the opening of Domus Australia - a place for accommodation for pilgrims and travellers to Rome. A joint project by several Australian dioceses under the leadership of Cardinal Pell.
To the surprise of some, including Vatican staff, Pope Benedict XV1 agreed to officially open Domus Australia. It was a big event and also the venue for Tim's farewell reception in January 2012.
Anyone who knows Tim Fischer also knows he has a great love for trains and the chapter on the little-used Vatican railway and the Caritas Express is a delight.
But it is not all about behind-the-scenes intrigue or light-hearted moments. Tim also addresses the issue of sexual abuse by Catholic clergy, the resignation of Pope Benedict (he predicted the event, just not the year), the conclave and election of Pope Francis and the future of the Vatican.
Tim Fischer is a great raconteur. Not surprising Holy See, Unholy Me is an enjoyable read.
Holy See, Unholy Me - 1,00days in Rome by Tim Fischer is published by Harper Collins and available through ABC Books
SHARED FROM ARCHDIOCESE OF SYDNEY
Posted by Jesus Caritas Est at 8:18 PM No comments:

38000 DISPLACED IN MYANMAR DUE TO DEVASTATING RAIN UCAN NEWS REPORT: Eastern Myanmar has been hit by heavy monsoon rains over the past week (AFP photo/Yamounnar)
The worst rains in 30 years in Kayin and Mon states on Myanmar’s border with Thailand also displaced 38,000 people as rice fields and bridges were washed away.
People have been sheltering in 113 relief camps since the rains hit on July 27, said state-runMyanmar Ahlin.
Mahn Panthi, a spokesman for the Karen National Union, the political wing of a Kayin ceasefire group, said that they had counted four dead so far “and the death toll may be more than the official figures.”
Henry, an aid worker with German agency Malteser International based in Kayin state’s capital Hpa-an, said that large numbers of displaced people have started to return home.
But many houses remained flooded, he added, meaning that relief aid is still required even as water levels in the Salween River continued to drop.
“Local authorities, NGOs and private donors have reached out to the relief camps supporting [the provision of] food and water,” he said.
SHARED FROM UCAN NEWS
Posted by Jesus Caritas Est at 8:16 PM No comments: