Vatican Radio REPORT: Parents are called to teach children to defend life, recognizing that life is a gift from God. This according to Pope Francis in his message sent on the occasion of the National Week of the Family in Brazil. The theme for this year’s celebration is “The Transmission and education of the Christian Faith within the family.” The Week of the Family opened on Sunday, and is being promoted by the Brazilian bishop’s conference.
In his message, Pope Francis encouraged parents in their “noble and demanding mission” of being the “first collaborators” with God, offering their children important guidance, and ensuring for them a good future. For this reason, the Holy Father said, quoting his encyclical Lumen Fidei, it is important that parents, within their own families, “encourage shared expressions of faith which can help children gradually to mature in their own faith.” (Lumen Fidei, 53) Parents, moreover, are called to transmit to their children, in both word and dead, the “fundamental truth about life and human love which receives new light from the Revelation of God.”
In a culture which devalues human life, Pope Francis said that parents are called to teach their children to defend life, beginning with life in the womb, recognizing that life is a gift from God and an assurance for the future of humanity. He also spoke about the importance of caring for the elderly, especially grandparents: they are the “living memory” of a community, and convey wisdom. Pope Francis imparted his apostolic blessing, entrusting Brazilian families to Our Lady of Aparecida.
SHARED FROM RADIO VATICANA
Posted by Jesus Caritas Est at 5:59 PM No comments:

MORE THAN 20 PEOPLE DISAPPEAR IN MEXICO

Agenzia Fides REPORT - "I do not care if the people missing in Potrero Nuevo, Paso del Macho and Cordoba are one or more persons, whether they are victims or are associated with crime, what is important is to clarify where they are, families cannot live in uncertainty. Already the fact that they are missing is worrying", said the Bishop of the Diocese of Córdoba, Veracruz in Mexico, His Exc. Mgr. Eduardo Patiño Leal.Mgr. Patiño Leal, in a statement sent to Fides by the local press, spoke yesterday Sunday, August 11 and insisted that everyone should do their own work: authorities, parents, teachers, priests should promote the value of life and not fall into a sort of indifference and pretend that everything is normal. "We are all involved", he said.The bishop took the opportunity to send a message to all young people to be "extremely vigilant", to avoid getting involved with criminal groups, not to be influenced by the fantasy that money is easy to obtain and then nothing will happen. Also in the statement sent to Fides, it is stated that a week has already passed since the death of 19 people in Potrero Nuevo, other people in Paso del Macho and others in Cordoba, but so far no one knows where they are and many families are desperate. (CE) (Agenzia Fides 12/08/2013)
Posted by Jesus Caritas Est at 5:57 PM No comments:

THOUSANDS IN DANGER OF STARVATION IN NAMIBIA AFRICA

WINDHOEK, August 08, 2013 (CISA) -About 400,000 people are at risk of starvation in northern Namibia due to a drought that has struck the country. The country’s government has warned that they are preparing for one of the worst crises since 1980.
The authorities, however, have received much criticism for the slowness with which they have responded to the problem and organized assistance.
In May last year, when 300,000 people were already at risk severe food insecurity, the head of state Hifikepunye Pohamba declared a state of emergency and requested the support of the international community.
The authorities had begun distributing bags of corn flour in rural area however; the lack of rain goes on to threaten the flora and fauna, a true jewel of the country and flying the tourism sector.
Namibia is home to the world’s oldest desert, the Namibia dunes of red sand that reach the coast deep into the Atlantic Ocean.
SHARED FROM CISA NEWS
Posted by Jesus Caritas Est at 5:51 PM No comments:

INAUGURAL MASS WITH CARDINAL PELL FOR INDIGENOUS SCHOOL IN AUSTRALIA 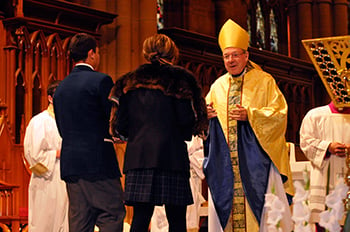 Cardinal Pell celebrated the Indigenous Mass for school students
The first Inaugural  Mass for Indigenous school students at St Mary's Cathedral today was attended by hundreds of students, families, teachers and leading Aboriginal elders. The special guest was the Governor of NSW, Prof Marie Bashir and the mass was celebrated by Cardinal George Pell.
All those who attended agreed  it was a beautiful way to celebrate International Day of the World's Indigenous Peoples.
For the 800 students it was a way to celebrate their culture, heritage and faith.
The liturgy included parts that were translated into Gadigal, the language of Sydney's first peoples.
Nearly 1000 Indigenous secondary and primary school students currently attend one of the Sydney Archdiocese's 149 Catholic schools with more enrolments expected for 2014.
The St Mary's Choir today was supported by professional Aboriginal artists with the opening hymn, Holy Spirit of this Land which pays tribute to the spirituality of Aboriginal people
and their close affinity with the land.
SHARED FROM ARCHDIOCESE OF SYDNEY
Posted by Jesus Caritas Est at 5:47 PM No comments:

ASIA NEWS REPORT
A group of law enforcement officers stopped Fr. Song Wanjun of the clergy of Xiwanzi, while driving his car at 4 in the morning. Place of detention unknown. The Northern Province, stronghold of Catholic China, still targeted by the authorities.

Beijing (AsiaNews) - A group of police officers from Qiaodong District, in the northern province of Hebei, have arrested and taken to an unknown location an underground priest of the diocese of Xiwanzi, Fr. Song Wanjun. The priest had already risked arrest some time ago, but had managed to escape. He was stopped and detained by 10 law enforcement officers at 4 in the morning of August 7 last while he was driving his car.
Fr. Song Wanjun, 39, was ordained a priest 11 years ago. He carried out his pastoral mission for years in Zhangbei county before being assigned to Chongli county. The news of his arrest was confirmed by the Joseph Cardinal Kung Foundation, based in the United States.

The Diocese of Xiwanzi is located in the northern part of the province. In recent years, the Chinese government has clamped down harshly on the local underground Church: many priests and bishops were imprisoned, placed under house arrest or forced to undergo "study sessions" to convince them to join the Patriotic Association, a government organization that Benedict XVI described in his letter to the Chinese Church as "incompatible" with Catholic doctrine.
In recent years other arrests of clergy include Msgr. Yao Ling, who has since died, Fr. Li Huisheng, sentenced to 7 years, Fr. Wang Zhong, sentenced to 3 years. Two underground bishops from Heibei province were also arrested several years ago, whose fate remains a mystery. The first is Msgr. James Su Zhimin, almost 82 year, bishop of Baoding (Hebei), arrested by the police on October 8, 1997. The charges against him, whether he was given a trail or where he is being held remain unknown.
In November 2003, he was located by chance while receiving hospital care in Baoding, but he was surrounded by police. After a brief and hurried visit from relatives, he once again disappeared in police custody. The second is Msgr. Cosma Shi Enxiang, 92 years old, bishop of Yixian (Hebei), arrested on 13 April 2001. All traces of his wellbeing or whereabouts have been lost, despite the constant pleas of his relatives and faithful to the authorities for the smallest amount of information. Some time ago AsiaNews launched a campaign for their release.
Hebei is one of the strongholds of the Catholic China: the diocese of Baoding alone, one of the largest and with a strong presence of underground Catholics, has at least 50 thousand Catholics. There are 120 priests, official and underground. For several years the government has launched a campaign to force Hebei priests and bishops of the underground community to officially register, along with their inscription as members of the Patriotic Association.

According to AsiaNews sources, over the past 20 years at least 20 Catholic priests of the underground area of ​​Zhangjiakou (Hebei), in the diocese of Xuanhua and Xiwanzi, have been tortured and suffered tremendous pressure join the Patriotic Association (PA) , controlled by the Communist Party of China.
SHARED FROM ASIA NEWS IT
Posted by Jesus Caritas Est at 5:45 PM No comments:

Monday of the Nineteenth Week in Ordinary Time
Lectionary: 413

Moses said to the people:
“And now, Israel, what does the LORD, your God, ask of you
but to fear the LORD, your God, and follow his ways exactly,
to love and serve the LORD, your God,
with all your heart and all your soul,
to keep the commandments and statutes of the LORD
which I enjoin on you today for your own good?
Think! The heavens, even the highest heavens,
belong to the LORD, your God,
as well as the earth and everything on it.
Yet in his love for your fathers the LORD was so attached to them
as to choose you, their descendants,
in preference to all other peoples, as indeed he has now done.
Circumcise your hearts, therefore, and be no longer stiff-necked.
For the LORD, your God, is the God of gods,
the LORD of lords, the great God, mighty and awesome,
who has no favorites, accepts no bribes;
who executes justice for the orphan and the widow,
and befriends the alien, feeding and clothing him.
So you too must befriend the alien,
for you were once aliens yourselves in the land of Egypt.
The LORD, your God, shall you fear, and him shall you serve;
hold fast to him and swear by his name.
He is your glory, he, your God,
who has done for you those great and terrible things
which your own eyes have seen.
Your ancestors went down to Egypt seventy strong,
and now the LORD, your God,
has made you as numerous as the stars of the sky.”

As Jesus and his disciples were gathering in Galilee,
Jesus said to them,
“The Son of Man is to be handed over to men,
and they will kill him, and he will be raised on the third day.”
And they were overwhelmed with grief.

When they came to Capernaum,
the collectors of the temple tax approached Peter and said,
“Does not your teacher pay the temple tax?”
“Yes,” he said.
When he came into the house, before he had time to speak,
Jesus asked him, “What is your opinion, Simon?
From whom do the kings of the earth take tolls or census tax?
From their subjects or from foreigners?”
When he said, “From foreigners,” Jesus said to him,
“Then the subjects are exempt.
But that we may not offend them, go to the sea, drop in a hook,
and take the first fish that comes up.
Open its mouth and you will find a coin worth twice the temple tax.
Give that to them for me and for you.”
Posted by Jesus Caritas Est at 5:23 PM No comments: