LATEST FROM POPE FRANCIS AND CARDINALS IN VATICAN 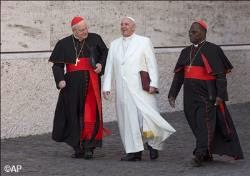 Vatican Radio/VIS REPORT: On Friday morning, 150 cardinals participated in the extraordinary consistory on the family, said Fr. Lombardi S.J., director of the Holy See Press Office, during a news briefing. He also communicated that the cardinals had expressed their warmest wishes to Cardinal Silvano Piovanelli, who celebrated his 90th birthday on Friday. At 7 a.m. they concelebrated Holy Mass with the Pope in the chapel of the Domus Sanctae Marthae. The participants in the Consistory entrusted to Fr. Lombardi the reading of the following declaration, approved by the Holy Father, which summarises the thoughts of the Pope and the College of Cardinals: “During the extraordinary Consistory, the Holy Father and the College of Cardinals raised a special prayer to the Lord for the many Christians who, in various parts of the world, are increasingly frequently victims of acts of intolerance or persecution. To those who suffer for the Gospel, the Holy Father and the Cardinals wish to renew their assurance of their constant prayers, urging them to stand firm in their faith and to forgive their persecutors from their hearts, in imitation of Jesus Christ. “Equally, the thoughts of the Pope and the Cardinals turned to those nations which in this period are riven by internal conflicts, or by serious tensions which have consequences for civil co-existence, such as South Sudan or Nigeria, in a climate of growing indifference. At this time there is particular apprehension with regard to the evolution of the difficult situation in Ukraine, where it is hoped that all violence will cease immediately and that harmony and peace will be re-established.
“Similarly, a great cause for concern is the continuing conflict in Syria, where it appears that the parties are still far from finding a lasting and peaceful solution, as well as the situation in the Central African Republic, which assumes greater proportions day by day. Initiatives on the part of the international community to promote peace and internal reconciliation, to guarantee the restoration of security and the rule of law, and to allow the indispensable access of humanitarian aid, are becoming increasingly urgent.
“Unfortunately, it is evident that many of the current conflicts are described as being of a religious nature, not infrequently surreptitiously placing Christians and Muslims in opposition, whereas in reality these conflicts have origins of a mainly ethnic, political or economic nature. “The Catholic Church, on her part, in condemning every form of violence perpetrated in the name of religious belief, will not cease in her commitment to peace and reconciliation, through interreligious dialogue and the many charitable works which provide daily assistance and comfort to the suffering throughout the world”.
After reading the declaration, Fr. Lombardi described the progress made on Friday, during which the Pope announced the name of the three presidents of the Synod on the Family: Cardinals Andre Vingt-Trois, archbishop of Paris, France; Luis Antonio G. Tagle, archbishop of Manila, Philippines; and Raymundo Damasceno Assis, archbishop of Aparecida, Brazil. The three presidents represent three different continents. Forty-three presentations were given Thursday afternoon and this morning, and others are expected to take place as many cardinals have registered to speak.
“We do not know if they will all be able to do so”, explained Fr. Lombardi. “Some will submit their contribution in writing, so that it can be included among the proceedings and may be useful for joint reflection by the Synod”. Among the themes considered are the concept of the family according to a Christian anthropological perspective and its value in the context of a secularised culture which presents a different concept of the family, sexuality and the person and in which the Christian approach at times encounters difficulties. “Reflection did not take place in a climate of complaint”, commented Lombardi, “but rather of realism, observing the difficulty faced by Christianity in a culture that tends to go in another direction. John Paul II's 'Theology of the Body' was quoted on a number of occasions, as well as the encyclical 'Familiaris consortio' and the Catechism of the Catholic Church'.
Another issue related to various aspects of the pastoral care of the family, especially preparation for marriage and matrimonial and family spirituality”. The cardinals also considered the problem of remarried divorcees from the perspective of canon law, and spoke about the procedures for annulment with a view to their improvement and simplification. With regard to the administering of the Sacraments to remarried divorcees, there were broad ranging and detailed discussions, but no decisions or pronouncements were made on the issue. “There was neither tension nor anxiety in relation to this matter, but rather a positive approach characterised by discernment and a concerted search for the best way to combine fidelity to the words of Jesus with divine mercy and attention to specific situations, always with great sensitivity”, said the director of the Press Office, who repeated that a single direction should not be expected of the Consistory, but rather an encouraging introduction to the path of the Synod, which by working with this breadth of vision, will be able to advance the Church's pastoral response to the heartfelt hopes held by many in this area. Finally, the cardinals discussed various specific areas of family pastoral ministry, such as migration or religious ignorance. Text from Vatican Radio website