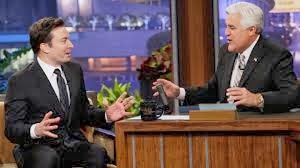 James Thomas Fallon was born September 19, 1974 in New York. He is the New host of "The Tonight Show Starring Jimmy Fallon." This is a late-night talk show that airs on NBC. Prior to that, he appeared in several films, and was best known as a cast member on Saturday Night Live from 1998 to 2004 and was the host of Late Night with Jimmy Fallon from 2009 to 2014. Fallon replaced Jay Leno as host of The Tonight Show.  He and his wife Nancy Juvonen (2007–present) have 1 daughter named Winnie (born: 2013).
In a 2011 Radio Interview with NPR Fallon spoke of growing up Catholic and that he wanted to be a priest.

FOR BREAKING NEWS AND INSPIRATIONAL STORIES AND FREE MOVIES
LIKE US ON FACEBOOK NOW http://www.facebook.com/catholicnewsworld
This is an excerpt from the transcript:
GROSS, host:  Jimmy Fallon, from his new book "Thank You Notes." And Jimmy, you know, sometimes Friday nights, the last thing I hear before going to sleep is your thank-you notes. (Soundbite of applause) (Soundbite of laughter)
GROSS: So you went to Catholic school when you were young.
FALLON: Oh yeah.
GROSS: Did you have...
Mr. FALLON: I wanted to be a priest.
GROSS: Did you really?
Mr. FALLON: Yeah. I loved it.
GROSS: Why?
Mr. FALLON: I just, I loved the church. I loved the idea of it. I loved the smell of the incense. I loved the feeling you get when you left church. I loved like how this priest can make people feel this good. I just thought it was, I loved the whole idea of it. My grandfather was very religious, so I used to go to mass with him at like 6:45 in the morning serve mass and then you made money too if you did weddings and funerals. They'd give you, you'd get like five bucks. And so I go okay, I can make money too. I go this could be a good deal for me. I thought I had the calling.
GROSS: Do you think part of that calling was really show business? 'Cause like the priest is the performer at church.
Mr. FALLON: Yeah. You know what - I really Terry, I'm, I recently thought about this. Again, I've never been to therapy but I guess that would be, it's being on stage. It's my first experience on stage is as an altar boy. You're on stage next to the priest, I'm a co-star. (Soundbite of laughter) Mr. FALLON: I'm, I've got... GROSS: Also starring Jimmy Fallon. (Soundbite of laughter) Mr. FALLON: Yeah, I have no lines but I ring bells. I ring bells and I swing the incense around. But it was my - and you know, you are performing. You enter through a curtain, you exit through the, I mean you're backstage. I mean have you ever seen backstage behind an alter? It's kind of fascinating. GROSS: Right. Mr. FALLON: So I think it was, I think it was my first taste of show business and I think - or acting or something. GROSS: And there are comparisons, I think, between a theater and a church. There are just kind of places that are separated from outside reality. Mr. FALLON: Yeah. And I remember I had a hard time keeping a straight face at church as well. GROSS: Did you? Mr. FALLON: Which - yeah... GROSS: Did you do imitations of the priest? (Soundbite of laughter)
FALLON: Oh, of course. Yeah. I used to do Father McFadden all the time. He's the fastest talking priest ever. He's be like... (Soundbite of mumbling) (Soundbite of laughter)
FALLON: And then you leave and you go, that - what was that? (Soundbite of laughter) Mr. FALLON: That guy's the best. I mean that was church? Sign me up. I'll do church I'll do it 10 times a day if that's church. He was great.

FOR BREAKING NEWS AND INSPIRATIONAL STORIES AND FREE MOVIES
LIKE US ON FACEBOOK NOW http://www.facebook.com/catholicnewsworld
http://www.npr.org/templates/transcript/transcript.php?storyId=136462013
Posted by Jesus Caritas Est at 6:00 PM