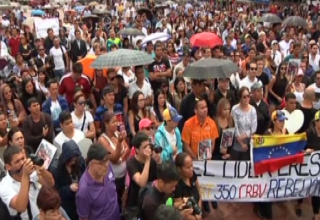 There are protests in Venezuela and violence between protesters and police. Nationwide protests started this February. On February 12, the demonstrations received attention when three people were killed. President Nicolas Maduro has been in power for 11 months after the death of Hugo Chavez. Many demonstrators across the country are students. Soldiers are shooting civilians on the street. So far 8 have died from these protests.

A Venezuela beauty queen, Genesis Carmona, age 22, was killed during the protests.Opposition leader Leopoldo Lopez was detained charges of terrorism and murder. He organized protests demanding better security, an end to shortages and protected freedom of speech. Lopez has denied the charges.


The charges against Lopez "smack of a politically motivated attempt to silence dissent in the country," .  Venezuelan officials accused the United States of destabilizing the government and gave three U.S. diplomats 48 hours to leave the country.  Chavez ruled for 14 years until his death last year.  Lopez remained in a military prison Thursday. His wife, Lilian Tintori de Lopez, called on supporters to keep the pressure on the government. "Don't give up," she said. "I won't." Venezuela is in South America and shares a border with Colombia, Brazil and Guyana; it has a population of 30 million.