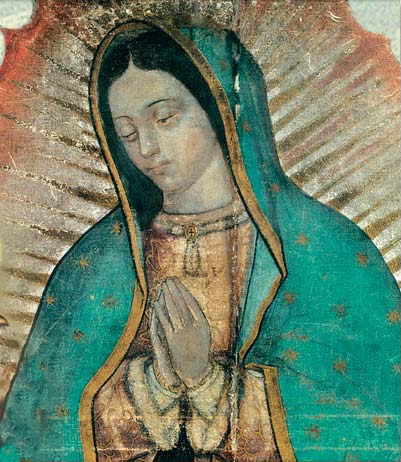 As the Mother of God, the Virgin Mary has a unique position among the saints, indeed, among all creatures. She is exalted, yet still one of us
"Redeemed by reason of the merits of her Son and united to Him by a close and indissoluble tie, she is endowed with the high office and dignity of being the Mother of the Son of God, by which account she is also the beloved daughter of the Father and the temple of the Holy Spirit. Because of this gift of sublime grace she far surpasses all creatures, both in heaven and on earth. At the same time, however, because she belongs to the offspring of Adam she is one with all those who are to be saved."
FOR BREAKING NEWS AND FREE MOVIES LIKE US ON FACEBOOK NOWhttp://www.facebook.com/catholicnewsworld
Mary embraces God's will and freely chooses to cooperate with God's grace, thereby fulfilling a crucial role in God's plan of salvation. Throughout the centuries, the Church has turned to the Blessed Virgin in order to come closer to Christ. Many forms of piety toward the Mother of God developed that help bring us closer to her Son. In these devotions to Mary, "while the Mother is honored, the Son, through whom all things have their being and in whom it has pleased the Father that all fullness should dwell, is rightly known, loved and glorified and . . . all His commands are observed." The Church honors her as the Mother of God, looks to her as a model of perfect discipleship, and asks for her prayers to God on our behalf.
Watch a video about devotion to Mary
Frequently Asked Questions about Mary
Marian Glossary
Prayer on the Solemnity of the Immaculate Conception

Many popular devotional practices involve veneration of the saints. The saints have a special place in the Body of Christ, which includes both the living and the dead. Through Christ we on earth remain in communion both with the saints in heaven and with the dead who are still in Purgatory. We can pray for those in Purgatory and ask the saints to pray for us. Through their prayers of intercession, the saints in heaven play an integral role in the life of the Church on earth. "For after they have been received into their heavenly home and are present to the Lord, through Him and with Him and in Him they do not cease to intercede with the Father for us, showing forth the merits which they won on earth through the one Mediator between God and man." The saints, the members of the Church who have arrived at perfect union with Christ, join their wills to the will of God in praying for those in the Church who are still on their pilgrimage of faith.
Besides what the saints can do for us by their prayers, the very practice of venerating the saints does great good for those who are devoted to the saints. By practicing love of the saints we strengthen the unity of the entire Body of Christ in the Spirit. This in turn brings us all closer to Christ. "For just as Christian communion among wayfarers brings us closer to Christ, so our companionship with the saints joins us to Christ, from Whom as from its Fountain and Head issues every grace and the very life of the people of God." Love of the saints necessarily includes and leads to love of Christ and to love of the Holy Trinity. "For every genuine testimony of love shown by us to those in heaven, by its very nature tends toward and terminates in Christ who is the 'crown of all saints,' and through Him, in God Who is wonderful in his saints and is magnified in them."
—From Popular Devotional Practices

The making of a saint

A canonization today is the Church's official declaration, through the decision of the pope, that a person is a saint, truly in heaven and worthy of public veneration and imitation. The process begins by naming the person "Venerable," a "Servant of God" who has demonstrated a life of heroic virtue.
The next stage is beatification, by which a person is named "Blessed." This step requires one miracle attributed to the intercession of the Servant of God.
For canonization, a second miracle is needed, attributed to the intercession of the Blessed and having occurred after the individual's beatification. Miracles are not required for martyrs. The pope may dispense with some of the formalities or steps in the process.

108. Why did Jesus manifest the Kingdom by means of signs and miracles?

Jesus accompanied his words with signs and miracles to bear witness to the fact that the Kingdom is present in him, the Messiah. Although he healed some people, he did not come to abolish all evils here below but rather to free us especially from the slavery of sin. The driving out of demons proclaimed that his cross would be victorious over "the ruler of this world" (John 12:31).
—From the Compendium of the Catechism of the Catholic Church