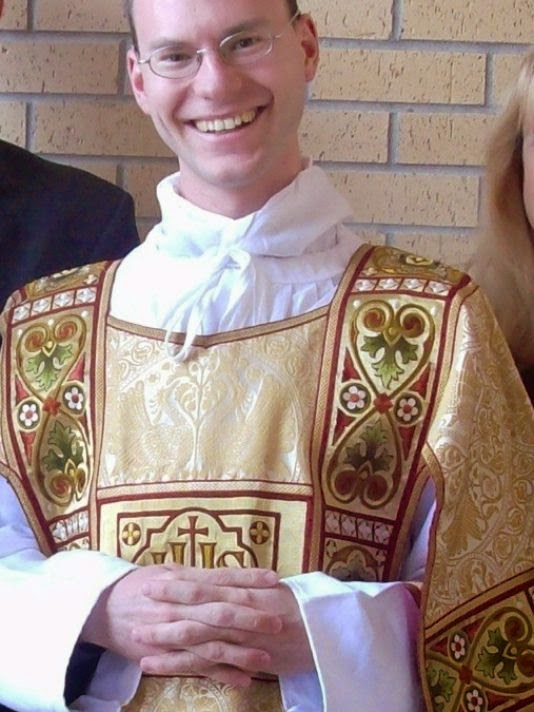 The viewing for Rev. Kenneth Walker was Thursday at Piper Funeral Home in Saint Mary's and A rosary was recited at Sacred Heart Church. The funeral mass began at 11:00 a.m. Friday morning. He was buried at Mount Calvary Cemetery afterwards. The Funeral was crowded and there was standing only at the back.
Sadly, the Westboro Baptist Church decided to Picket this Funeral. This Anti-Catholic Church wrote the following on their Website: WBC will picket the funeral of Assistant Pastor Kenneth Walker doomed to reside in Hell eternity after a life spent as part of the Catholic Pedophile Machine. From a young age, Walker was indoctrinated into the Priests Rape Boys religion propagated by the Catholics. As an adult, he willingly participated in furthering their satanic goals by joining a seminary and entering the priesthood.
For More Background on Fr. Walker and Fr. Terra Click:
http://jceworld.blogspot.ca/2014/06/fssp-priest-killed-in-rectory-rip-fr.html
http://jceworld.blogspot.ca/2014/06/funeral-for-fr-kenneth-walker-killed.html 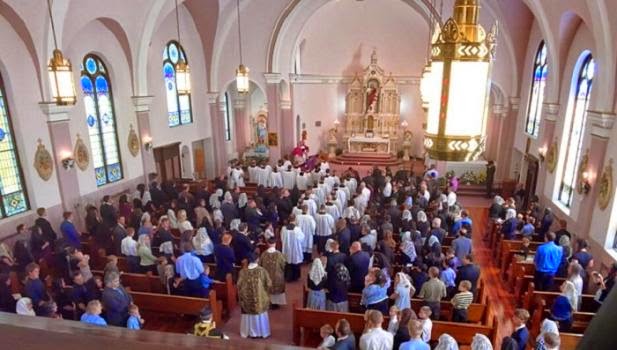 Rev. Kenneth Walker FSSP Rev. Kenneth Walker FSSP, 28, died Wednesday, June 11, 2014 in Phoenix, AZ., as a result of injuries he received in a break-in at the Mater Misericordia Parish Rectory in Phoenix. He was born September 13, 1985 at Poughkeepsie, NY, the son of Thomas Walker and Marypat Luber. He was baptized on October 13 of the same year at St. Mary's Church in Wappingers Falls, NY. During his high school years, his family discovered and began attending the Traditional Latin Mass. He was strongly influenced by both the Mass and the devotion of his family, and began considering a vocation to the priesthood. After high school, he attended Our Lady Seat of Wisdom, Barry's Bay, ON, pursuing a classical formation in liberal arts from the fall of 2003 until April 2005. After the influence of his parents, Fr. Walker always credited the College as being essential to his formation in the faith prior to entering the seminary. Fr. Walker was accepted to the Our Lady of Guadalupe Seminary, the Fraternity of St. Peter's International House of Formation for English speakers in Nebraska, in the fall of 2005, and began the normal course of studies and formation. His dedication to fulfilling the ideals with which he approached the priesthood was evident in his time in seminary. He performed very well academically, always receiving high marks in his courses. He immersed himself in the fullness of the program of formation, from the life of prayer and liturgy to recreation with other seminarians - especially in his love of playing soccer, a popular sport at the seminary. After completing the First Year of Spirituality, he was first incorporated into the FSSP, received the cassock, and received Tonsure from Bishop Alvaro Corrada, SJ, on October 6, 2006. After five more years of prayer, work, and study, Bishop Fabian Bruskewitz ordained him to the subdiaconate on January 29, 2011. He was permanently incorporated into the FSSP on March 18, and on the next day, March 19, 2011 - the feast of St. Joseph - he was ordained a deacon by Bishop Czeslaw Kozon of Copenhagen. As a deacon, he traveled to the Fraternity's other seminary in Wigratzbad, Germany for several months in order to complete further studies and gain the perspective of the Fraternity's international presence. He also assisted for a number of months at the Mater Misericordiae Mission of the FSSP in Phoenix, AZ. Interestingly, he performed his first Baptism on October 13, 2011 - the anniversary of his own Baptism. Returning to Nebraska in May of 2012, he made a retreat in preparation for his priestly ordination, the culmination of his seven years of studies and prayer life. On May 19, 2012, Kenneth Walker was ordained to the Holy Priesthood of Christ our Savior in Lincoln, Nebraska by Bishop Fabian Bruskewitz. He offered his first Mass at the Chapel of Sts. Peter and Paul at Our Lady of Guadalupe Seminary, and was assisted by Fr. John Berg, Superior General of the FSSP. He received his first priestly assignment that summer, returning to Mater Misericordiae in Phoenix as an assistant priest under Fr. Joseph Terra, FSSP. Survivors include his mother, Marypat Luber (George Green) and their daughter, Stephanie; his father, Thomas (Amy) Walker, siblings, Tavia (Jack) McGowan, Raul (Fawn) Contreras, Thomas (Theresa) Walker, Sasha (Thomas) Keys, Travis Contreras, Cassy (Luke) Harbin, Katie Contreras, Rosie (John Mark) Hoffman, Matthew (Mary) Contreras and Joseph Walker; 13 nieces and nephews; a grandmother Peggy Ann Smith; aunts and uncles, Mary (Steven) Dubuis, Peter Walker, Christopher (Megumi) Walker, Carol Walker, Barbara (Gary) Curtis, Patricia (Daniel) Lucari, James Walker, Jonathan Walker, Jack (Eileen) Luber, Bruce (Carol) Luber, Ann (Thomas) Dumbroski, Peter (Lisa) Luber; Robert (Patricia) Smith, Kathy Plumb, Nina (Robert) Wolfe, Penny (Brian) Menning, Mark Smith, Steven (Angela) Smith and Francis (Pam) Smith: numerous cousins. Requiem Mass will be at 11:00 A.M. Friday, June 20, 2014 at Sacred Heart Catholic Church in Newbury. Fr. Walker will lie in state on Thursday, June 19, 2014 from 2:00 until 5:00 P.M. at Piper Funeral Home in St. Marys. There will be a Rosary recited at 7:00 P.M. Thursday evening at Sacred Heart Church. Interment will be in Mt. Calvary Cemetery, St. Marys. Memorial contributions may be made in Fr. Walker's name and sent in care of Piper Funeral Home, 714 Maple St., St. Marys, Kansas 66536. Online condolences may be sent to www.piperfuneralhome.com. Rev. Kenneth Walker FSSPPublished in Topeka Capital-Journal on June 18, 2014
Full Video of the FSSP Requiem Mass for Fr. Kenneth