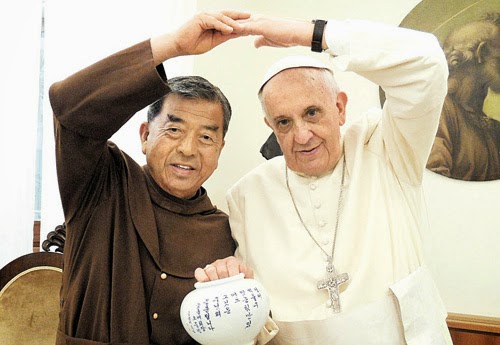 36 South Korean artists made the song "Koinonia". It is a symbol of friendship and sharing, for the Pope on his arrival. The stars made this for free due to the great honor. It will be officially performed at the beatification ceremony of the 124 Korean Martyrs. Pope Francis will make an official apostolic journey to South Korea from August 14 to 18.
For Breaking News, Prayers,  Inspirational Stories, and Free Catholic Movies LIKE http://fb.com/catholicnewsworld

The actor Ahn Sung-ki, one of the organizers, said "if we are united in prayer for others [through the music], this could be the most beautiful bouquet of flowers that we could present to the Pope on his arrival". "Koinonia" gets its name from the Greek words for friendship and sharing in communion. "If more people prayed for others, the world would be a better place to live," explained the author and composer Noh Young-sim, during a press conference. It was launched on July 7 at the Cathedral of Myeongdong in Seoul, where the Pope will celebrate the final mass of the trip. Other stars include actress Kim Tae-hee, Kim Woo-bin and singer Bada.
Posted by Jesus Caritas Est at 3:31 PM