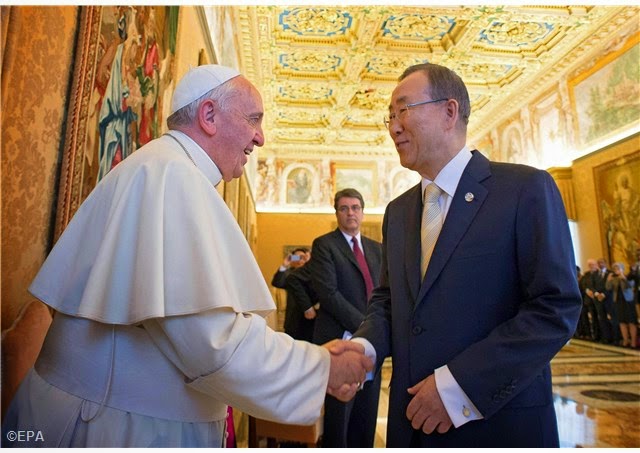 (Vatican Radio) Pope Francis has sent a Message to the participants in the 69th General Assembly of the United Nations, which convened on September 16th. The Pope's Message was delivered on Wednesday, September 24th - the first day of the General Debate of the Assembly - by the new Permanent Observer of the Holy See to the United Nations in New York, Archbishop Bernardito Auza, at the end of his first address to the Assembly. Please find the full text of the Pope's Message, which is to be found at the end of the text of Archbishop Auza's address, below. (Image source Google Pope Francis with Ban-Ki Moon earlier this year)

*************************************
REMARKS
of H.E. Archbishop Bernardito Auza,
Permanent Observer of the Holy See to the United Nations
Prayer Service on the occasion of the
Opening of the Sixty-Ninth Session of the United Nations General Assembly
Your Excellency Mr. Secretary General Ban Ki-moon and Mrs. Ban Soon-taek,
Your Excellencies the Presidents of the 68th and the 69th Sessions of the United Nations General Assembly,
Your Excellencies,
Friends and supporters of the United Nations:
It gives me great pleasure to begin my mission as Permanent Observer of the Holy See to the United Nations with this evening’s Prayer Service, to invoke the Almighty’s blessings upon all the Nations of the world, as the Sixty-Ninth Session of the United Nations General Assembly is about to begin.
In behalf of the His Holiness Pope Francis, I am delighted to greet all of you. In particular, I extend a cordial welcome to His Excellency the Secretary General Mr. Ban Ki-moon and Mrs. Ban Soon-taek, as well as to His Excellency the President of the just concluded Sixty-eighth UN General Assembly, Mr. John Ashe and Mrs. Ashe, and to His Excellency the President of the Sixty-ninth UN General Assembly, Mr. Sam Kutesa and Mrs. Kutesa. I am delighted as well to acknowledge the gracious presence of many Permanent Representatives and Mission Staff, as well as high-ranking officials of the UN System and Agencies. I express profound gratitude for your presence and your prayers for peace in the world.
Excellencies, dear friends, let us all work towards an ever-greater realization of the founding ideals of the United Nations, first among which is to “save succeeding generations from the scourge of war”. Let us then heed the call for peace, by beating our swords into plowshares, and our spears into pruning hooks, so that no nation may ever lift up a sword against another nation, and that we may never train for war any more (cfr. Is. 2:4), nor any group may ever use violence to impose its ideology upon others. Because war is madness, and senseless is violence.
Alas, the current situation of violence and war in many parts of the world reminds us that lasting peace has remained elusive to many.  Right at this very moment, death, destruction and tragic loss of lives are happening in several areas of the world. It would seem that we have yet to learn the lesson from the madness of war and the senselessness of violence.
We cannot construct a world more genuinely human unless each one of us devotes himself or herself to the cause of peace with ever-renewed vigor, and make the pursuit of peace a constant rule of life. For, indeed, peace is never achieved once and for all; it is the fruit of our daily quest for greater justice and respect for one another. Let it, therefore, be our daily aim to be an instrument and a channel of peace.
Moreover, for believers, peace is not merely a result of our human efforts, but also a gift from the Almighty. That is why we come together this evening, to pray for peace and to commend the important work of the United Nations to God, as the Sixty-ninth Session of the General Assembly is about to open. We pray that all the stakeholders may reach agreements on difficult questions that affect us all, not only on issues of war and peace, but also on the respect of fundamental human rights and on improving the quality of life for all, which are key to consolidating peace and security throughout the world.
I would like to end by conveying to you the message that Pope Francis has for this evening’s Prayer Service, signed by the Secretary of State, Pietro Cardinal Parolin:
“HIS HOLINESS POPE FRANCIS SENDS CORDIAL GREETINGS TO ALL GATHERED IN PRAYER IN ANTICIPATION OF THE SIXTY-NINTH SESSION OF THE UNITED NATIONS GENERAL ASSEMBLY. AS THE ASSEMBLY PREPARES TO DISCUSS SUSTAINABLE DEVELOPMENT AND IMPROVED QUALITY OF LIFE AS MEANS TO FURTHER PEACE, PROSPERITY AND SECURITY THROUGHOUT THE WORLD, HIS HOLINESS ENCOURAGES ALL NATIONS TO KEEP THE DIGNITY OF EVERY HUMAN PERSON FOREMOST IN THEIR DELIBERATIONS. IN THIS WAY, HE HOPES THAT SOLUTIONS MAY BE SOUGHT WHICH PROMOTE PEACE AMONG PEOPLES AND WHICH CONFRONT POVERTY THROUGH THE “VALUING OF FRATERNAL RELATIONSHIPS IN THE HEART OF FAMILIES AND COMMUNITIES, THROUGH THE SHARING OF JOYS AND SORROWS, OF HARDSHIPS AND TRIUMPHS THAT ARE PART OF HUMAN LIFE.”  POPE FRANCIS ASSURES THOSE PRESENT OF HIS SPIRITUAL CLOSENESS IN PRAYING THAT THE NEW SESSION OF THE GENERAL ASSEMBLY MAY BE AN OCCASION OF GREATER UNDERSTANDING AND COOPERATION BETWEEN DELEGATION MEMBERS FOR THE GOOD OF THE GLOBAL COMMUNITY AND IN SERVICE OF LASTING PEACE AND PROSPERITY FOR ALL PEOPLE. HIS HOLINESS WILLINGLY INVOKES THE DIVINE BLESSINGS OF STRENGTH AND WISDOM UPON ALL ENGAGED IN THE MISSION OF THE UNITED NATIONS.”
God bless the United Nations and all Nations of the world! Shared from Radio Vaticana
Posted by Jesus Caritas Est at 12:46 PM