Pope Francis “Sin is so ugly, but God’s love is so great that He saves us in this way: with this identity in the Cross." Homily 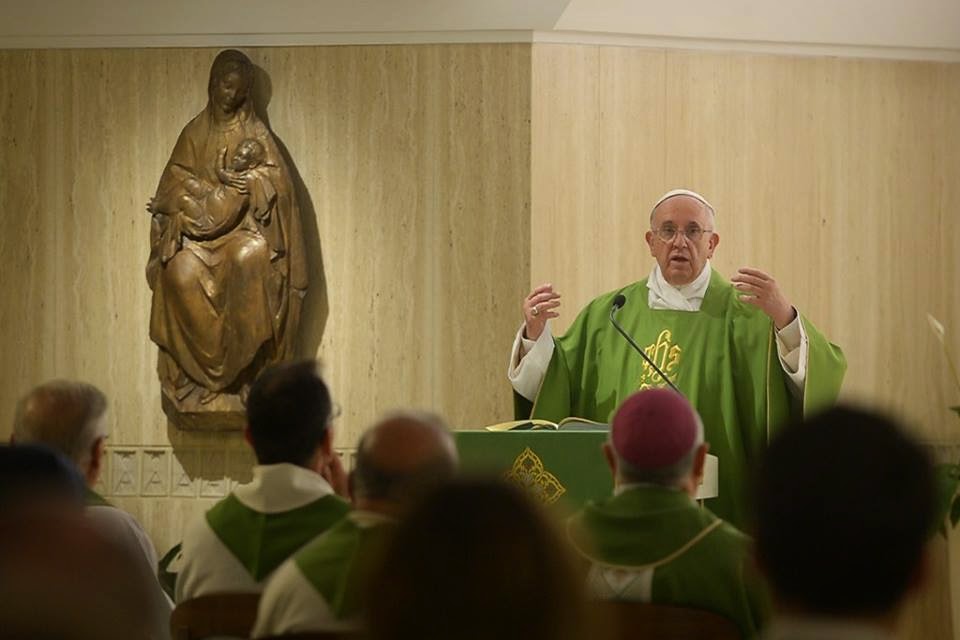 (Vatican Radio) A Christian cannot understand Christ the Redeemer without the Cross, without being ready to bear the Cross with Jesus. That was Pope Francis’ message at Friday’s morning Mass at the Casa Santa Marta.

To be a Christian means to be a “Cyrene” [like Simon of Cyrene - ed.]. Having the faith consists in this: You belong to Jesus if you bear the weight of the Cross with Him. Otherwise you are going along a path that seems “good” – but is not “true.” The basis for the Pope’s reflections was the day’s Gospel, in which Christ asks His disciples what the people are saying about Him, and receives the most disparate answers. This episode, the Pope noted, takes place in the context of the Gospel that sees Jesus guarding “in a special manner His true identity.” On several occasions, when someone came close to divulging His identity, “He stopped them,” just as many times He prevented the demons from revealing His nature as the “Son of God,” Who had come for the salvation of the world. This, the Poe explained, was because the people misunderstood and thought of the Messiah as a military leader who would expel the Romans. It was only privately, to the Twelve, that Jesus “began to do the catechesis on His true identity”:
“‘The Son of Man, that is, the Messiah, the Anointed must suffer greatly, must be rejected by the elders, the chief priests, and the scribes, and be killed and on the third day be raised.’ This is the path of your liberation. This is the path of the Messiah, of the Just One: the Passion, the Cross. And He explains His identity to them. They don’t want to understand; and in the passage from Matthew, one sees how Peter refuses this: ‘No! No, Lord…’ But He begins to open up the mystery of His true identity: ‘Yes, I am the Son of God. But this is my path: I must go along this path of suffering.’”
This, Pope Francis said, is the “pedagogy” that Jesus uses “to prepare the hearts of the disciples, the hearts of the people, to understand this mystery of God”:
“Sin is so ugly, but God’s love is so great that He saves us in this way: with this identity in the Cross. You can’t understand Jesus Christ the Redeemer without the Cross: you can’t understand! We can come to believe that he is a great prophet, he does good things, he’s a saint. But without the Cross you can’t understand Christ the Redeemer. The hearts of the disciples, the hearts of the people were not prepared to understand it. They didn’t understand the Prophecies, they didn’t understand that He Himself was the Lamb for the sacrifice. They were not prepared.”
It is only on Palm Sunday, the Pope noted, that Christ allowed the crowds to proclaim, “more or less,” His identity, when they cried out “Blessed is He who comes in the name of the Lord!” And this, Pope Francis said, was because “if the people did not cry out, the stones would have cried out.” On the other hand, it is only after His death that the identity of Jesus appears in its fullness; the “first confession” came from the Roman centurion, the Pope noted. He concluded: “Step by step [Jesus] prepares us so that we can understand better. He prepares us to accompany Him with our crosses, along His path to Redemption”:
“He prepares us to be ‘Cyrenes’ to help Him bear the Cross. And our Christian life without this is not Christian. It is a spiritual life, good… ‘Jesus is the great prophet, and He has saved us. But He and I, no… No, you with Him! Taking the same path. Still our identity as Christians must be guarded, not believing that being Christian is a merit; it is a spiritual path of perfection. It is not a merit, it is pure grace.”
Posted by Jesus Caritas Est at 9:23 AM