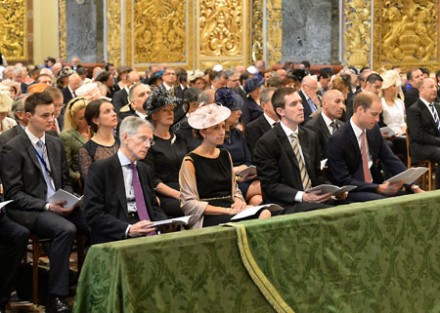 Catholic Herald Co UK: Prince William, the Duke of Cambridge, has attended his first public Mass in an official capacity, Buckingham Palace has confirmed.
During a visit to Malta last weekend, the second in line for the throne went to Mass in St John’s Cathedral in Valletta, the island’s capital.
The Prince, attending in an official capacity as part of the celebrations of the 50th anniversary of Malta’s independence, was seated beside British High Commissioner Rob Luke, just a few seats away from Maltese President Marie Louise Coleiro Preca.
Prince William was travelling alone, without his wife, Katherine, and 14-month-old son George.
Aides told assembled media that Prince William might have attended Masses privately in the past but this was his first public appearance at such a ceremony.
In a private capacity, Prince William might have attended the Requiem Mass for Frances Kydd, his Catholic maternal grandmother, at the Catholic Cathedral in Oban on June 10 2004.
A spokeswoman for Buckingham Palace later said: “This was the Prince’s first public Mass,” she said.
“There is every chance he may have attended one in private but we couldn’t verify that,” she added.
“But this is the first Catholic Mass he has publicly attended in an official capacity.”
The cathedral is regarded as one of the finest examples of Baroque architecture in the world, and is home to Caravaggio’s painting of the beheading of St John the Baptist.
When Prince William ascends the British throne he will inherit the title of supreme governor of the Church of England.
He also has strong Catholic links because he is distantly related to Fr Ignatius (George) Spencer, whose Cause for sainthood is presently being considered by the Vatican.
A great-great-great uncle of the Prince’s mother, Diana, Fr Spencer was an Anglican vicar before he became a Catholic at the age of 31, then a priest and ultimately a Passionist.
He had not shown strong feelings toward Christianity until he saw Mozart’s Don Giovanni during a visit to Paris and was struck by a scene in which the anti-hero Giovanni, a seducer and blasphemer, is carried off to Hell by a troop of devils.
During his ministry in England Fr Spencer worked with Irish migrants so poor that some lived in caves dug out of slag heaps.
He also expressed the wish that he would like to die in poverty like Jesus – “in a ditch, unseen and unknown”, which was fulfilled when on October 1 1864 he had a seizure on a country lane near Edinburgh and died there alone.
Shared from Catholic Herald Co UK
Posted by Jesus Caritas Est at 10:03 AM