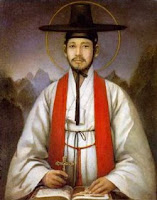 Andrew Kim Tae-gon was born on 21 August 1821, in Chungchong Province, Korea. His parents, being converts to Catholicism, were subject to persecution, to avoid which they moved to Kyonggi Province. At 15 years old, Kim Tae-gon was chosen by a visiting priest to be a seminarian, and was sent with two other seminarians to Macao. He arrived in 1873 and began his studies with the missionaries of the Far Eastern Procure of the Parish Foreign Mission Society. In 1842 Kim Tae-gon left Macao as an interpreter for a French admiral aboard a warship. When the admiral returned to France, Kim Tae-gon tried to return to his homeland through the strictly guarded norther frontier, but he failed. He was ordained a deacon in China in 1844 and managed to return to Korea the next year, arriving in Seoul early in 1845. He then led the French missionaries by sea to Shanghai, where Bishop Ferreol ordained him the first Korean priest in the Church’s 60-year history in Korea. He returned to Korea with Bishop Ferreol, reaching Chungchong Province in October of the same year. In his home town and vicinity, he catechized the faithful, until Bishop Ferreol summoned him to Seoul. At the Bishop's command, he tried to introduce French missionaries from China into Korea, enlisting the aid of Chinese fishermen. For this, Father Kim Tae-gon was arrested and sent to the central prison in Seoul, where was charged as the ringleader of a heretical sect and traitor to his country. He was sentenced to death and was beheaded on 16 September 1846. He was beatified by Pope Pius XI in 1925, and canonized by Pope John-Paul II on 6 May 1984.