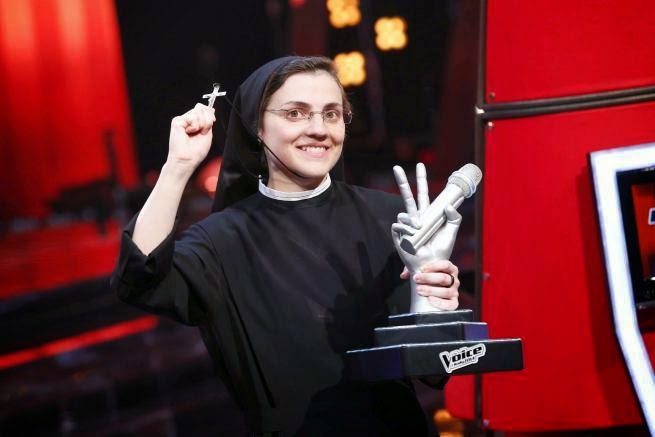 Sister Cristina Scuccia, age 25, who won 1st prize on the show "The Voice" in Italy is now making her 1st Music Video with Universal. She always wore her habit and a crucifix around her neck during performances. Suor Cristina thanked God for her win  and recited the "Our Father" prayer saying "I want Jesus to come in here!" she said. This new Video shows her preparing her new Album.

"My presence here is not up to me, it's thanks to the man upstairs!" said the Sister. Suor Cristina, is originally from Sicily but now lives with the Ursuline order in Milan. She won the record contract with Universal. She explained, "I'm not here to start a career but because I want to impart a message." She felt called to perform from Pope Francis's calls for a Church that is closer to ordinary people. Her performance of Alicia Keys's "No One" that first led to her popularity. This performance has reached over 57 million YouTube hits. Actress Whoopi Goldberg -- star of "Sister Act" - also endorsed Suor Christina. Suor Christina said, "Since Pope Francis talks of a bible of joy I think I'm on the right track." She was inspired to become a nun when she auditioned for a part in a musical about the founder of the Ursuline Order, Saint Angela Merici. Christina became a novice in 2009 and worked for two years with poor children in Brazil. "I will continue to sing wherever the Lord wants," she said. According to reports “The work will be done in time to be a Christmas present.”  SHARE her Amazing Story!