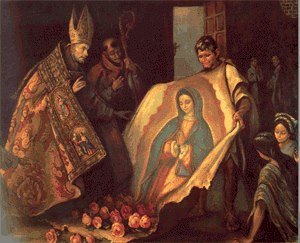 (Image share - Facebook)
St Juan Diego Cuauhtlatoatzin (1474-1548). Little is known about the life of Juan Diego before his conversion, but tradition and archaeological and iconographical sources, along with the most important and oldest indigenous document on the event of Guadalupe, "El Nican Mopohua" (written in Náhuatl with Latin characters, 1556, by the Indigenous writer Antonio Valeriano), give some information on the life of the saint and the apparitions.Juan Diego was born in 1474 with the name "Cuauhtlatoatzin" ("the talking eagle") in Cuautlitlán, today part of Mexico City, Mexico. He was a gifted member of the Chichimeca people, one of the more culturally advanced groups living in the Anáhuac Valley.When he was 50 years old he was baptized by a Franciscan priest, Fr Peter da Gand, one of the first Franciscan missionaries. On 9 December 1531, when Juan Diego was on his way to morning Mass, the Blessed Mother appeared to him on Tepeyac Hill, the outskirts of what is now Mexico City. She asked him to go to the Bishop and to request in her name that a shrine be built at Tepeyac, where she promised to pour out her grace upon those who invoked her. The Bishop, who did not believe Juan Diego, asked for a sign to prove that the apparition was true. On 12 December, Juan Diego returned to Tepeyac. Here, the Blessed Mother told him to climb the hill and to pick the flowers that he would find in bloom. He obeyed, and although it was winter time, he found roses flowering. He gathered the flowers and took them to Our Lady who carefully placed them in his mantle and told him to take them to the Bishop as "proof". When he opened his mantle, the flowers fell on the ground and there remained impressed, in place of the flowers, an image of the Blessed Mother, the apparition at Tepeyac.With the Bishop's permission, Juan Diego lived the rest of his life as a hermit in a small hut near the chapel where the miraculous image was placed for veneration. Here he cared for the church and the first pilgrims who came to pray to the Mother of Jesus.Much deeper than the "exterior grace" of having been "chosen" as Our Lady's "messenger", Juan Diego received the grace of interior enlightenment and from that moment, he began a life dedicated to prayer and the practice of virtue and boundless love of God and neighbour. He died in 1548 and was buried in the first chapel dedicated to the Virgin of Guadalupe. He was beatified on 6 May 1990 byPope John Paul II in the Basilica of Santa Maria di Guadalupe, Mexico City.The miraculous image, which is preserved in the Basilica of Our Lady of Guadalupe, shows a woman with native features and dress. She is supported by an angel whose wings are reminiscent of one of the major gods of the traditional religion of that area. The moon is beneath her feet and her blue mantle is covered with gold stars. The black girdle about her waist signifies that she is pregnant. Thus, the image graphically depicts the fact that Christ is to be "born" again among the peoples of the New World, and is a message as relevant to the "New World" today as it was during the lifetime of Juan Diego.

(Vatican Radio) Pope Francis met on Friday with Polish bishops at the conclusion of their Ad Limina visit, telling them the Church in Poland has great potential of faith, prayer, charity and Christian practice. Noting that their meeting comes just ahead of the canonization of Blessed John Paul II, the Pope stressed the need for unity among all the bishops to work for the common good of the Church and its people.Pope Francis spoke with the Church leaders about the positive signs of faith in Poland today, but he also urged them to pay particular attention to the increasing numbers of divorced and separated families, urging the bishops to make sure such people do not feel excluded from the Church. He said it’s important to support young couples preparing for marriage and to seek new ways of helping them to appreciate both the joyful and the difficult moments of their life together.Looking ahead to the next international World Youth Day which will be held in Krakow in 2016, the Pope said young people in Poland are well formed in their faith through Catholic schools . However he stressed it’s important to remember that religion is not something abstract, but rather a living relationship with the God of love. He encouraged young people to live their faith through groups or associations based on the Word of God and the liturgy, but also on community life and missionary witnessSpeaking of the large numbers of Polish priests working both at home and abroad, Pope Francis said it’s vital to continue praying for new vocations to the priesthood and consecrated life, especially for the women’s congregations which have seen a significant drop in recent years. Finally the Pope urged the bishops to care especially for the poor, the unemployed, the sick and the those with no one else to care for them. Despite the ongoing development of the Polish economy, he said the Church must be’ imaginative in its charity’ and remain close to those in need, including the large numbers of Polish people who’ve emigrated in search of a better life abroad.
Text from  Vatican Radio website
Posted by Jesus Caritas Est at 7:29 AM No comments:

Friday of the Fourth Week in Ordinary Time
Lectionary: 327

King Herod heard about Jesus, for his fame had become widespread,
and people were saying,
“John the Baptist has been raised from the dead;
that is why mighty powers are at work in him.”
Others were saying, “He is Elijah”;
still others, “He is a prophet like any of the prophets.”
But when Herod learned of it, he said,
“It is John whom I beheaded. He has been raised up.”

Herod was the one who had John arrested and bound in prison
on account of Herodias,
the wife of his brother Philip, whom he had married.
John had said to Herod,
“It is not lawful for you to have your brother’s wife.”
Herodias harbored a grudge against him
and wanted to kill him but was unable to do so.
Herod feared John, knowing him to be a righteous and holy man,
and kept him in custody.
When he heard him speak he was very much perplexed,
yet he liked to listen to him.
Herodias had an opportunity one day when Herod, on his birthday,
gave a banquet for his courtiers, his military officers,
and the leading men of Galilee.
His own daughter came in and performed a dance
that delighted Herod and his guests.
The king said to the girl,
“Ask of me whatever you wish and I will grant it to you.”
He even swore many things to her,
“I will grant you whatever you ask of me,
even to half of my kingdom.”
She went out and said to her mother,
“What shall I ask for?”
Her mother replied, “The head of John the Baptist.”
The girl hurried back to the king’s presence and made her request,
“I want you to give me at once on a platter
the head of John the Baptist.”
The king was deeply distressed,
but because of his oaths and the guests
he did not wish to break his word to her.
So he promptly dispatched an executioner
with orders to bring back his head.
He went off and beheaded him in the prison.
He brought in the head on a platter
and gave it to the girl.
The girl in turn gave it to her mother.
When his disciples heard about it,
they came and took his body and laid it in a tomb.
Posted by Jesus Caritas Est at 7:27 AM No comments: