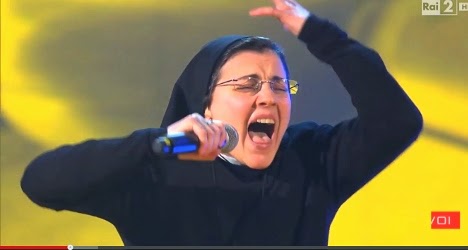 Sister Cristina, a 25-year-old nun from Sicily, near Italy, performed on the Italian talent show “The Voice” for a blind audition on Wednesday. The show’s judges have their back turned to the stage for part of the song. The nun makes an amazing performance, and was cheered on by three nun supporters backstage.
SHARE!
She is a member of the Ursuline Sisters of the Holy Family. Sister Cristina was with four sisters from her order, and her parents at the March 19 show. She sang Alicia Keys’ No One. The four judges of the "The Voice" are the singers Raffaella Carra, J-Ax, Noemi and Piero Pelu.

FOR BREAKING NEWS AND INSPIRATIONAL STORIES AND FREE MOVIES
LIKE US ON FACEBOOK NOW http://www.facebook.com/catholicnewsworld
When questioned by the judges the sister said,  “I have a gift and I’m giving it to you”. “If I had found you at mass I would always be in church,” said the judge, rapper J-Ax. Sister Cristina commented: “I hope that Pope Francis will call me now.” This video has gone viral receiving over 1 million views.
Posted by Jesus Caritas Est at 11:14 PM No comments:

(Vatican Radio) Pope Francis has planted a virtual olive tree for peace as part of an initiative aimed at getting children around the world to plant their own trees, to help foster an awareness of peace and what it means in their homes, communities, and countries. The Pope planted his virtual tree by tapping the touch screen of a tablet yesterday afternoon in the Santa Marta guesthouse in the Vatican, during an encounter with representatives of Scholas Occurrentes "the Worldwide Network of Schools Getting Together." The initiative is being promoted by the Pontifical Academy of Sciences Chancellor Argentine Bishop Marcelo Sanchez Sorondo. In addressing the group of about 40 people, Pope Francis talked about education, sports and solidarity. The Pontifical Academy of Sciences is inviting schools to participate in the initiative “in all levels.” Pope Francis, who Wednesday was also celebrating the first anniversary of his installation and Father’s Day, launched a tweet for the occasion: “I greet the World School Network for Encounter. Today we plant the first virtual olive tree for peace. @infoscholas”
Text from  Vatican Radio website
Posted by Jesus Caritas Est at 10:27 PM No comments:


source: http://www.ewtn.com/saintsHoly/saints/H/stherbert.asp#ixzz1pdwd5ZVd
Posted by Jesus Caritas Est at 8:18 AM No comments: