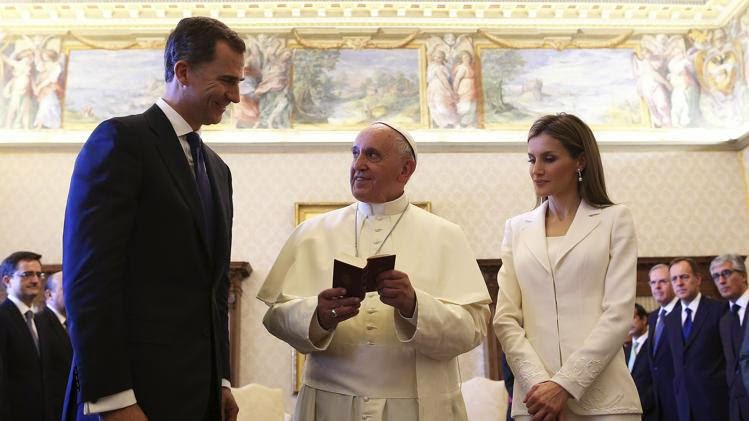 (Vatican Radio) Today, Monday 30 June 2014, in the Apostolic Palace, Pope Francis received in audience Their Majesties King Felipe VI and Queen Letizia of Spain, who subsequently met with His Eminence Cardinal Secretary of State Pietro Parolin, accompanied by Mgsr. Antoine Camilleri, under-secretary for Relations with States.
During the cordial discussions, satisfaction was expressed for today’s visit, their first trip abroad as reigning monarchs, which follows the recent visit by King Juan Carlos I and Queen Sofia on 28 April. It is hoped that this may mark the strengthening of the existing good relations between the Holy See and Spain.


The conversation focused on themes of common interest and the importance of promoting dialogue and collaboration between the Church and the State for the good of all Spanish society. Finally, mention was made of various problems of an international and regional nature, paying particular attention to areas of conflict. Shared from Radio Vaticana
Posted by Jesus Caritas Est at 11:07 PM No comments:

Pope Francis "There are many martyrs today, in the Church, many persecuted Christians."

(Vatican Radio) Pope Francis said on Monday that there are more persecuted Christians in the world today than there were in the first centuries of Christianity. The Pope’s words came as he celebrated Mass at the Casa Santa Marta on the day in which the Church remembers the first Roman martyrs who were martyred during Nero's persecution in 64.
\
The prayer at the beginning of the Mass recalls that “the blood of the martyrs is the seed of the Church”. We speak of the growth of a plant – the Pope said in his homily – and this makes us think of what Jesus used to say: "The kingdom of heaven is like a seed. Someone took the seed and planted it in the ground and then went home – and whether he slept or was awake – the seed grew and blossomed”. This seed is the Word of God that grows and becomes the Kingdom of Heaven; it becomes Church thanks to the strength of the Holy Spirit and to the witness of Christians.
“We know that there is no growth without the Spirit: it is He who is Church, it is He who makes the Church grow, it is He who convokes the Church’s community. But the witness of Christians is necessary too. And when historical situations require a strong witness, there are martyrs, the greatest witnesses. And the Church grows thanks to the blood of the martyrs. This is the beauty of martyrdom. It begins with witness, day after day, and it can end like Jesus, the first martyr, the first witness, the faithful witness: with blood”.
But there is one condition that is necessary for a true witness  – Pope Francis pointed out – and that is “there must be no conditions”.
“In the Gospel reading of the day one of Jesus’s disciples said that he would follow Him, but only after having buried his father… and the Lord replied: ‘No! Follow me without conditions’. Your witness must be firm; you must use the same strong language that Jesus used: ‘Your words must be yes, yes, or no, no’. This is the language of testimony”.
“Today – Pope Francis said – we look upon the Church of Rome that grows, fed by the blood of martyrs. So it is right – he continued – that our thoughts turn to the many martyrs of today, the many martyrs who give their lives for faith. It is true that during the times of Nero many Christians were persecuted, and today – he said – there are just as many”.
"There are many martyrs today, in the Church, many persecuted Christians. Think of the Middle East where Christians must flee persecution, where Christians are killed. Even those Christians who are forced away in an ‘elegant’ way, with ‘white gloves’: that too is persecution. There are more witnesses, more martyrs in the Church today than there were in the first centuries. So during this Mass, remembering our glorious ancestors, let us think also to our brothers who are persecuted, who suffer and who, with their blood are nurturing the seed of so many little Churches that are born. Let us pray for them and for us”.
Posted by Jesus Caritas Est at 11:02 PM No comments: 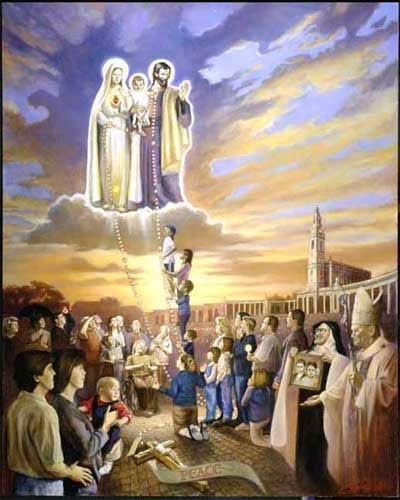 Monday of the Thirteenth Week in Ordinary Time
Lectionary: 377

Thus says the LORD:
For three crimes of Israel, and for four,
I will not revoke my word;
Because they sell the just man for silver,
and the poor man for a pair of sandals.
They trample the heads of the weak
into the dust of the earth,
and force the lowly out of the way.
Son and father go to the same prostitute,
profaning my holy name.
Upon garments taken in pledge
they recline beside any altar;
And the wine of those who have been fined
they drink in the house of their god.

Beware, I will crush you into the ground
as a wagon crushes when laden with sheaves.
Flight shall perish from the swift,
and the strong man shall not retain his strength;
The warrior shall not save his life,
nor the bowman stand his ground;
The swift of foot shall not escape,
nor the horseman save his life.
And the most stouthearted of warriors
shall flee naked on that day, says the LORD.

When Jesus saw a crowd around him,
he gave orders to cross to the other shore.
A scribe approached and said to him,
“Teacher, I will follow you wherever you go.”
Jesus answered him, “Foxes have dens and birds of the sky have nests,
but the Son of Man has nowhere to rest his head.”
Another of his disciples said to him,
“Lord, let me go first and bury my father.”
But Jesus answered him, “Follow me,
and let the dead bury their dead.
Posted by Jesus Caritas Est at 10:40 PM No comments:

Protomartyrs of Rome
Feast: June 30
SOURCE: http://www.ewtn.com/saintsHoly/saints/P/protomartyrsofrome.asp#ixzz1zH56vP9h
Posted by Jesus Caritas Est at 6:14 AM No comments: