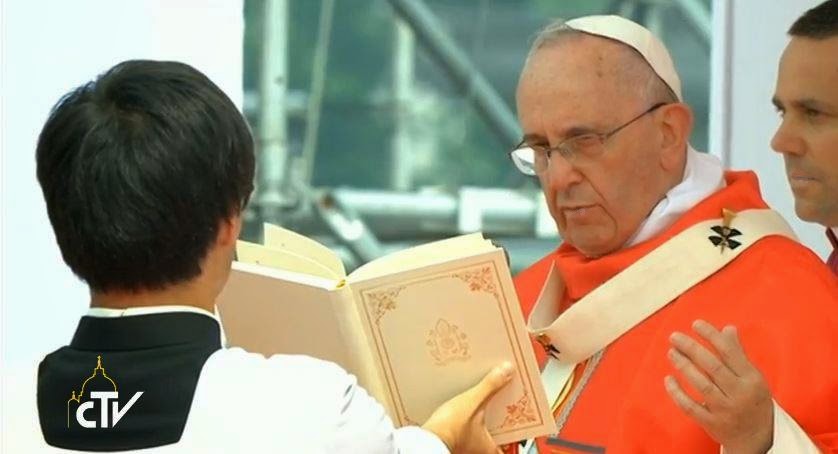 Who shall separate us from the love of Christ? (Rom 8:35).  With these words, Saint Paul speaks of the glory of our faith in Jesus: not only has Christ risen from the dead and ascended to heaven, but he has united us to himself and he grants us a share in his eternal life.  Christ is victorious and his victory is ours!

Today we celebrate this victory in Paul Yun Ji-chung and his 123 companions. Their names now stand alongside those of the holy martyrs Andrew Kim Taegon, Paul Chong Hasang and companions, to whom I just paid homage. All of them lived and died for Christ, and now they reign with him in joy and in glory.  With Saint Paul, they tell us that, in the death and resurrection of his Son, God has granted us the greatest victory of all.  For “neither death, nor life, nor angels, nor principalities, nor things present, nor things to come, nor powers, nor height, nor depth, nor anything else in all creation, will be able to separate us from the love of God in Christ Jesus our Lord” (Rom 8:38-39).

The victory of the martyrs, their witness to the power of Gods love, continues to bear fruit today in Korea, in the Church, which received growth from their sacrifice.  Our celebration of Blessed Paul and Companions provides us with the opportunity to return to the first moments, the infancy as it were, of the Church in Korea.  It invites you, the Catholics of Korea, to remember the great things which God has wrought in this land and to treasure the legacy of faith and charity entrusted to you by your forebears. 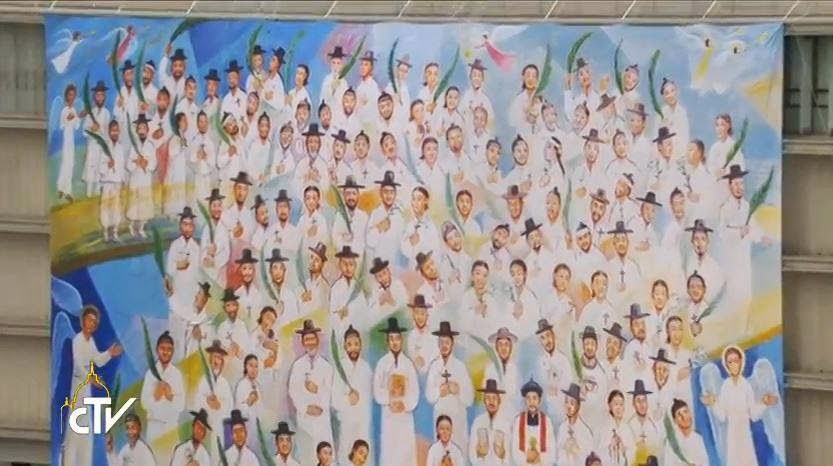 In Gods mysterious providence, the Christian faith was not brought to the shores of Korea through missionaries; rather, it entered through the hearts and minds of the Korean people themselves.  It was prompted by intellectual curiosity, the search for religious truth.  Through an initial encounter with the Gospel, the first Korean Christians opened their minds to Jesus.  They wanted to know more about this Christ who suffered, died, and rose from the dead.  Learning about Jesus soon led to an encounter with the Lord, the first baptisms, the yearning for a full sacramental and ecclesial life, and the beginnings of missionary outreach.  It also bore fruit in communities inspired by the early Church, in which the believers were truly one in mind and heart, regardless of traditional social differences, and held all things in common (cf. Acts 4:32).

This history tells us much about the importance, the dignity and the beauty of the vocation of the laity.  I greet the many lay faithful present, and in particular the Christian families who daily by their example teach the faith and the reconciling love of Christ to our young.  In a special way, too, I greet the many priests present; by their dedicated ministry they pass on the rich patrimony of faith cultivated by past generations of Korean Catholics.
Todays Gospel contains an important message for all of us.  Jesus asks the Father to consecrate us in truth, and to protect us from the world.

First of all, it is significant that, while Jesus asks the Father to consecrate and protect us, he does not ask him to take us out of the world.  We know that he sends his disciples forth to be a leaven of holiness and truth in the world: the salt of the earth, the light of the world.  In this, the martyrs show us the way.
Soon after the first seeds of faith were planted in this land, the martyrs and the Christian community had to choose between following Jesus or the world.  They had heard the Lord’s warning that the world would hate them because of him (Jn 17:14); they knew the cost of discipleship.  For many, this meant persecution, and later flight to the mountains, where they formed Catholic villages.  They were willing to make great sacrifices and let themselves be stripped of whatever kept them from Christ – possessions and land, prestige and honor – for they knew that Christ alone was their true treasure.

So often we today can find our faith challenged by the world, and in countless ways we are asked to compromise our faith, to water down the radical demands of the Gospel and to conform to the spirit of this age.  Yet the martyrs call out to us to put Christ first and to see all else in this world in relation to him and his eternal Kingdom.  They challenge us to think about what, if anything, we ourselves would be willing to die for.

The example of the martyrs also teaches us the importance of charity in the life of faith.  It was the purity of their witness to Christ, expressed in an acceptance of the equal dignity of all the baptized, which led them to a form of fraternal life that challenged the rigid social structures of their day.  It was their refusal to separate the twin commandment of love of God and love of neighbor, which impelled them to such great solicitude for the needs of the brethren.  Their example has much to say to us who live in societies where, alongside immense wealth, dire poverty is silently growing; where the cry of the poor is seldom heeded; and where Christ continues to call out to us, asking us to love and serve him by tending to our brothers and sisters in need.
If we follow the lead of the martyrs and take the Lord at his word, then we will understand the sublime freedom and joy with which they went to their death.  We will also see today’s celebration as embracing the countless anonymous martyrs, in this country and throughout the world, who, especially in the last century, gave their lives for Christ or suffered grave persecution for his name.

Today is a day of great rejoicing for all Koreans.  The heritage of Blessed Paul Yun Ji-chung and his companions – their integrity in the search for truth, their fidelity to the highest principles of the religion which they chose to embrace, and their testimony of charity and solidarity with all – these are part of the rich history of the Korean people.  The legacy of the martyrs can inspire all men and women of good will to work in harmony for a more just, free and reconciled society, thus contributing to peace and the protection of authentically human values in this country and in our world.

May the prayers of all the Korean martyrs, in union with those of Our Lady, Mother of the Church, obtain for us the grace of perseverance in faith and in every good work, holiness and purity of heart, and apostolic zeal in bearing witness to Jesus in this beloved country, throughout Asia, and to the ends of the earth.  Amen.
Posted by Jesus Caritas Est at 10:19 PM No comments: 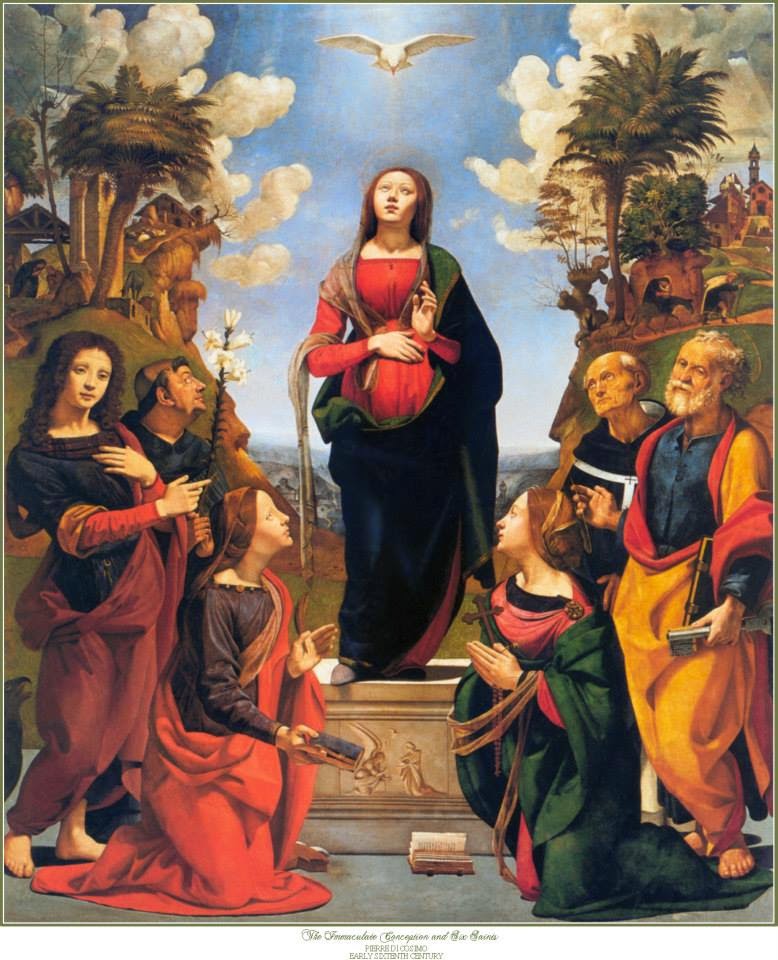 Solemnity of the Assumption of the Blessed Virgin Mary
Mass during the Day
Lectionary: 622

God’s temple in heaven was opened,
and the ark of his covenant could be seen in the temple.

A great sign appeared in the sky, a woman clothed with the sun,
with the moon under her feet,
and on her head a crown of twelve stars.
She was with child and wailed aloud in pain as she labored to give birth.
Then another sign appeared in the sky;
it was a huge red dragon, with seven heads and ten horns,
and on its heads were seven diadems.
Its tail swept away a third of the stars in the sky
and hurled them down to the earth.
Then the dragon stood before the woman about to give birth,
to devour her child when she gave birth.
She gave birth to a son, a male child,
destined to rule all the nations with an iron rod.
Her child was caught up to God and his throne.
The woman herself fled into the desert
where she had a place prepared by God.

Then I heard a loud voice in heaven say:
“Now have salvation and power come,
and the Kingdom of our God
and the authority of his Anointed One.”

Brothers and sisters:
Christ has been raised from the dead,
the firstfruits of those who have fallen asleep.
For since death came through man,
the resurrection of the dead came also through man.
For just as in Adam all die,
so too in Christ shall all be brought to life,
but each one in proper order:
Christ the firstfruits;
then, at his coming, those who belong to Christ;
then comes the end,
when he hands over the Kingdom to his God and Father,
when he has destroyed every sovereignty
and every authority and power.
For he must reign until he has put all his enemies under his feet.
The last enemy to be destroyed is death,
for “he subjected everything under his feet.”

Mary set out
and traveled to the hill country in haste
to a town of Judah,
where she entered the house of Zechariah
and greeted Elizabeth.
When Elizabeth heard Mary’s greeting,
the infant leaped in her womb,
and Elizabeth, filled with the Holy Spirit,
cried out in a loud voice and said,
“Blessed are you among women,
and blessed is the fruit of your womb.
And how does this happen to me,
that the mother of my Lord should come to me?
For at the moment the sound of your greeting reached my ears,
the infant in my womb leaped for joy.
Blessed are you who believed
that what was spoken to you by the Lord
would be fulfilled.”

“My soul proclaims the greatness of the Lord;
my spirit rejoices in God my Savior
for he has looked with favor on his lowly servant.
From this day all generations will call me blessed:
the Almighty has done great things for me
and holy is his Name.
He has mercy on those who fear him
in every generation.
He has shown the strength of his arm,
and has scattered the proud in their conceit.
He has cast down the mighty from their thrones,
and has lifted up the lowly.
He has filled the hungry with good things,
and the rich he has sent away empty.
He has come to the help of his servant Israel
for he has remembered his promise of mercy,
the promise he made to our fathers,
to Abraham and his children forever.”

Mary remained with her about three months
and then returned to her home.
Posted by Jesus Caritas Est at 12:23 PM No comments:

Pope Francis "Today Christ is knocking at the door of your heart." Text/Video to Youth in Korea

Posted by Jesus Caritas Est at 9:43 AM No comments: