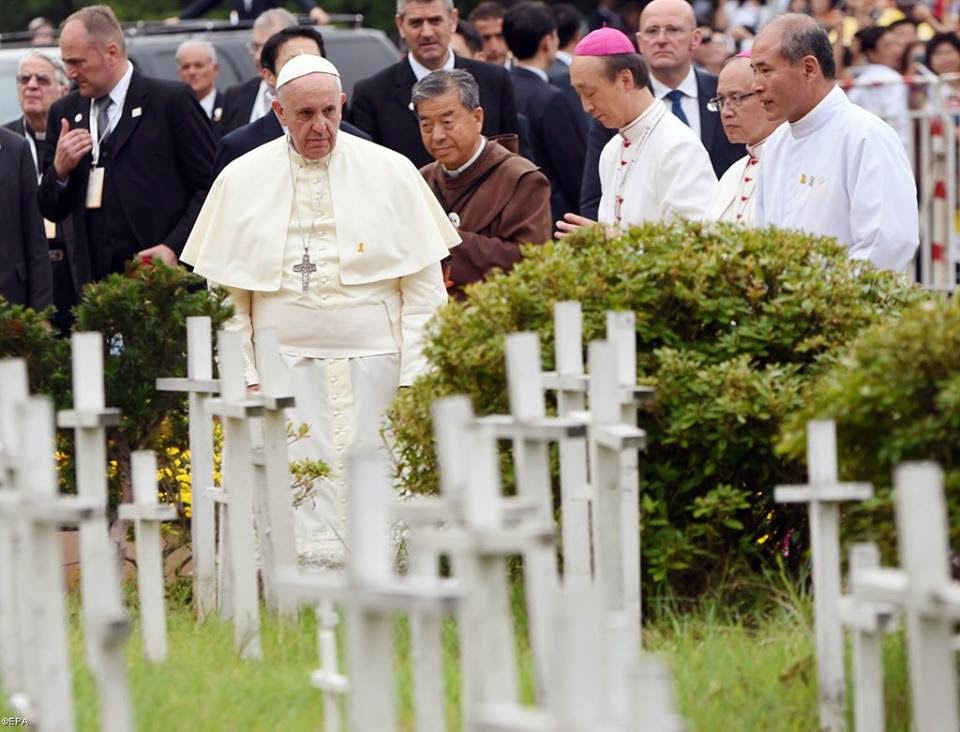 Posted by Jesus Caritas Est at 11:52 PM No comments:

Asia News Report: Baptised by the pope, father of a Sewol victim chooses Francis as his nameAs expected, this morning Francis baptised Lee Ho-jin, a man who lost a son in the ferry sinking of 16 April. After the ceremony, the two talked briefly. Francis Lee says he is "grateful for the pope's love and closeness".
Seoul (AsiaNews) - At 7:30 am this morning (local time), Pope Francis baptised Lee Ho-jin, father of one of the victims of the sinking of Sewol. The latter chose the name Francis, and thanked the pontiff after the ceremony for the "love and closeness" he personally expressed to him and to victims' families.
Lee's daughter and some family members were present at the ceremony, which took place at the Nunciature in Seoul and was co-celebrated by the Pope himself and Nuncio Mgr Osvaldo Padilla.
Lee had personally asked the pope to be baptised when the two met just before the great Mass for the Assumption in Daejeon World Cup Stadium on Friday. On that occasion, a group of 11 people, including survivors and relatives of those who died on 16 April, briefly spoke with the pope in front of the sacristy before the liturgy.
Since then, the Holy Father has worn a yellow ribbon on his white mozzetta, as a token of support for the families who since the day of disaster have been asking for "truth and justice" from the South Korean government.
Lee Ho-jin had been attending a Catholic Church for about two years. To honour his son Seung-hyeon, who died in the sinking of the ferry, he carried a cross during the last pilgrimage in honour of the victims (900 kilometres on foot, a round trip from where his child was born to the harbour where the disaster took place).

"The Church has brought me a lot of comfort at this time of tragedy for all of us. I wanted to thank it however I could," he had told AsiaNews on the day of the Assumption. (VFP)
Posted by Jesus Caritas Est at 11:48 PM No comments:


(Vatican Radio) Pope Francis continues  his Apostolic journey to Korea which began August 13th and ends on August 18th. This marks his  first visit to Asia, a continent where 60% of the world’s  population lives. While on Saturday he presided over a beatification ceremony of 124 Korean martyrs in Seoul on Sunday he travelled by helicopter to Haemi, which lies 102 kilometres south west of this capital city, to preside over another solemn celebration: the concluding  Mass to mark the 6th Asian Youth Day. At the end of the Mass Indian Cardinal Oswald Gracias, President of the Federation of the Asian Bishop's Conference, announced that Indonesia would be the venue for the  7th Asian Youth Day in 2017.
The venue for Sunday's Holy Mass was the square in front of the Castle there, first built to defend the population from pirates back  in 1421, in 1490 it became a military stronghold with  barracks and prisons within its compound. It was here that almost three thousand Christians were detained during the anti- Christian persecutions of  the XIX century. The walls of the castle are two kilometers long and the vast area within can hold up to 200.000 people.
On this occasion young people from across Asia gathered  there to be part of Sunday’s congregation on this very special occasion as Sean Patrick Lovett reports.
“Asian Youth! Wake up!”
Here in Korea, everywhere you look, you see this slogan – in every shape, size and form: on banners fluttering from lampposts and draped across skyscrapers, on caps, t-shirts and coffee-cups. It flashes across TV screens and is emblazoned upon anything and everything associated with these Asian Youth Day celebrations.
So no one was surprised when Pope Francis focussed on the individual words of this slogan during his homily at the Mass closing the 6th Asian Youth Day, using his familiar 3-point catechetical approach, and confirming some of his favourite inspirational themes.
As “Asians”, he said, “you have a right and a duty to take full part in the life of your societies. Do not be afraid to bring the wisdom of faith to every aspect of social life”. “As Christians”, he continued, “you can appreciate the many positive values of the diverse Asian cultures. You are also able to discern what is incompatible with your Catholic faith…and what aspects of contemporary culture are sinful, corrupt, and lead to death”.
As “Youth”, said Pope Francis, “you are filled with the optimism, energy and good will which are so characteristic of this period in life. Let Christ turn your natural optimism into Christian hope, your energy into moral virtue, your good will into genuine self-sacrificing love”. “As Christians”, he went on, “you are not only a part of the future of the Church, you are also a necessary and beloved part of the Church’s present”. The Pope urged the young people of Asia to keep close to one another, to God, and their Bishops, in order to build “a holier, more missionary and humble Church” that seeks “to serve the poor, the lonely, the infirm and the marginalised”.
As Asian Youth called to “Wake up!”, concluded the Pope, you have a responsibility and a duty “to be vigilant, not to allow the pressures, the temptations and the sins of ourselves or others to dull our sensitivity to the beauty of holiness, to the joy of the Gospel”. No one can do anything if they are asleep, improvised Pope Francis in English, repeating again and again the challenge to “Wake up!”.
In Seoul, I’m Seàn-Patrick Lovett.
Posted by Jesus Caritas Est at 11:40 PM No comments: