Pope Francis speaks to the Tribunal of the Roman Rota on January 24, 2014
20/09/
(Vatican Radio) The Holy See Press Office on Saturday announced Pope Francis has decided to establish a Special Commission  for the study of the reform of the matrimonial processes in canon law. The decision was made on August 2, 2014.
This Committee will be chaired by Msgr. Pio Vito Pinto, Dean of the Roman Rota.  The other members are:  and will be composed of the following members: Cardinal Francesco Coccopalmerio, President of the Pontifical Council for Legislative Texts; Archbishop Luis  Francisco Ladaria Ferrer, SJ, secretary of the Congregation for the Doctrine of the Faith; Bishop Dimitri Salachas, Apostolic Exarch of the Greek Byzantine Catholic Church; Msgrs. Maurice Monier, Leo Xavier Michael Arokiaraj and Alejandro W. Bunge, Prelate Auditors of the Tribunal of the Roman Rota; the Rev. Fr.  Nikolaus Schöch, O.F.M., Substitute Promotor of Justice of the Supreme Tribunal of the Apostolic Signatura; Fr. Konštanc Miroslav Adam, O.P., Rector of the Pontifical University of Saint Thomas Aquinas (Angelicum); Fr. Jorge Horta Espinoza, O.F.M., Dean of the Faculty of Canon Law of the Pontifical University Antoniamum; and Prof. Paolo Moneta, formerly professor of Canon Law at the University of Pisa.
The work of the Commission will start as soon as possible and will have as its goal to prepare a proposal of reform of the matrimonial process, with the objective of simplifying its procedure, making it more streamlined, and safeguarding the principle of the indissolubility of matrimony. Shared from Radio Vaticana
Posted by Jesus Caritas Est at 6:28 PM No comments:

(Vatican Radio) Pope Francis received the President of Argentina, Cristina Fernandez de Kirchner on Saturday. The meeting began at 12:30 Rome Time in the lobby of the Santa Marta guesthouse, and lasted roughly a quarter-hour. After the private colloquy, Pope Francis greeted the other members of the presidential delegation. President Kirchner brought the Holy Father an image of Our Lady, Untier of Knots, one of the devotional titles of which Pope Francis is most fond, and one under which he promoted devotion to our lady in Argentina. Following their meeting, the Pope and the President proceeded to lunch together at the Casa Santa Marta. Shared from Radio Vaticana
For Information on the Prayer :
http://jceworld.blogspot.ca/2014/05/novena-to-our-lady-untier-of-knots.html
Posted by Jesus Caritas Est at 4:30 PM No comments: 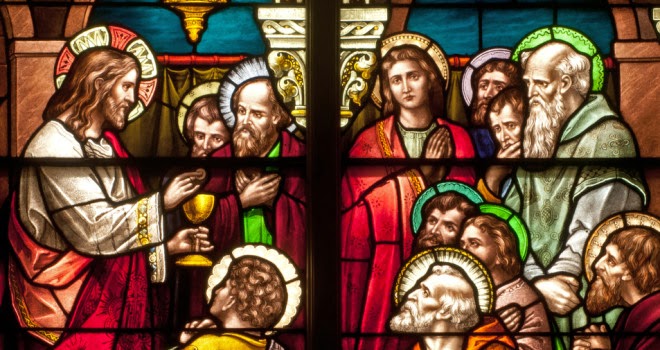 Brothers and sisters:
Someone may say, “How are the dead raised?
With what kind of body will they come back?”

Then his disciples asked him
what the meaning of this parable might be.
He answered,
“Knowledge of the mysteries of the Kingdom of God
has been granted to you;
but to the rest, they are made known through parables
so that they may look but not see, and hear but not understand.