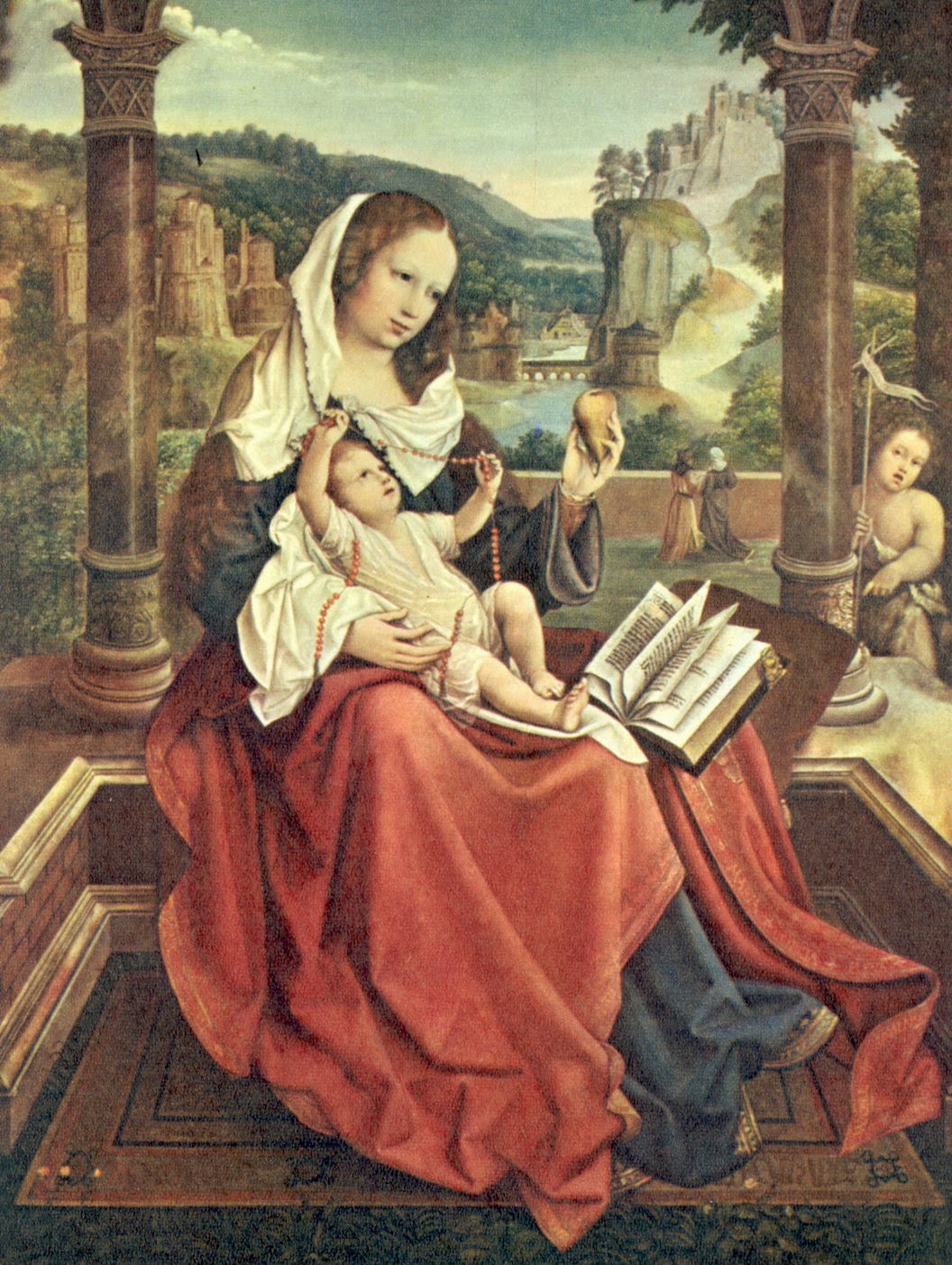 Thursday of the First Week of Advent
Lectionary: 178

On that day they will sing this song in the land of Judah:

“A strong city have we;
he sets up walls and ramparts to protect us.
Open up the gates
to let in a nation that is just,
one that keeps faith.
A nation of firm purpose you keep in peace;
in peace, for its trust in you.”

Trust in the LORD forever!
For the LORD is an eternal Rock.
He humbles those in high places,
and the lofty city he brings down;
He tumbles it to the ground,
levels it with the dust.
It is trampled underfoot by the needy,
by the footsteps of the poor.

Jesus said to his disciples:
“Not everyone who says to me, ‘Lord, Lord,’
will enter the Kingdom of heaven,
but only the one who does the will of my Father in heaven. 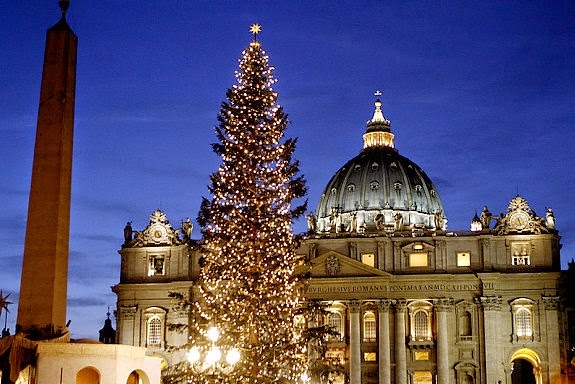 A New Christmas tree has arrived at St. Peter's Square in the Vatican. Christmas season has now officially begun St. Peter's Square with the installment of this 82 foot Christmas tree. Once the massive tree was set up, pilgrims and visitors waited for the decorations. The tree is from the Italian region of Calabria and is approximately 70 years old.  The Christmas tree, along with the Nativity scene, will be illuminated on the evening of December 19th. (Edited from RomeReports)
Posted by Jesus Caritas Est at 9:09 AM No comments:

Pope Francis “In this time of preparation for Christmas, let us ask the Lord to..." Homily

- OSS_ROM
04/12/2014 12:
(Vatican Radio) There are many hidden saints, men, women, fathers and mothers of families, sick people, priests who every day put into practice the love of Jesus; and this give us hope. That was the message of Pope Francis today at his daily morning Mass at Santa Marta.
The true Christian puts the Word of God into practice; it is not enough to say that you have faith. Commenting on the parable of the house built on rock or on sand, taken from the day’s Gospel, Pope Francis said we should not be “Christians in appearance,” made-up Christians, because when the rain comes, the make-up runs off. It is not enough to belong to a very Catholic family, or to an association, or to be a benefactor, if we do not follow God’s will. “So many ‘apparent Christians,’ collapse at the first temptation,” he said, because “there is no substance there,” they have built on sand. On the other hand, there are many saints among the People of God – “not necessarily canonized saints, but saints” – who “put the love of Jesus into practice.” They build their houses on the rock, which is Christ:
“Let us consider the smallest… the sick who offer their sufferings for the Church, for others. Let us consider so many of the elderly who are alone, who pray and make offerings. Let us consider so many mothers and fathers of families, who, with so much effort, raise their families, educate their children, carry on their daily work, bear their problems, but always with hope in Jesus, who do not strut about, but do what they can.”
They are “the saints of daily life,” the Pope said:
“Let us consider so many priests who are not seen, but who work in their parishes with such love: [doing the work of] catechesis for children, care of the elderly, of the sick, the preparation of new spouses… and every day the same, the same, the same. They are not bored because their foundation is the rock. It is Jesus, it this that gives holiness to the Church, it is this that gives hope!”
“We should think about so much hidden holiness there is in the Church,” Pope Francis said, “Christians who remain in Jesus. Sinners, eh? We are all [sinners]. And yet sometimes one of these Christians commits some grave sin, but is penitent, seeks pardon, and this is great: the capacity to seek pardon, to not confuse sin with virtue, to know well where virtue is, and where sin is. These are founded on rock, and the rock is Christ. They follow the path of Christ, they follow Him.”
“The proud, the vain, the ‘Christians in appearance’ will be demolished, humbled,” the Pope said, while “ the poor will be those who triumph, the poor in spirit, those who in the presence of God consider themselves to be nothing, the humble, and they carry forward salvation, putting into practice the Word of the Lord.” He continued, citing St Bernard: “Today we are, tomorrow we will not be. Think, man, what will become of you: [you will be] the food of worms… The worms will eat us, all of us. If we do not have this rock, we will end up trampled down.”:
“In this time of preparation for Christmas, let us ask the Lord to be founded firmly on the rock that is Him, our hope [which] is Him. We are all sinners, we are weak, but if we place our hope in Him we can go forward. And this is the joy of a Christian: knowing that in Him there is hope, there is pardon, there is peace, there is joy. And not to place our hope in things that are today, and tomorrow will not be.”
Posted by Jesus Caritas Est at 8:51 AM No comments: 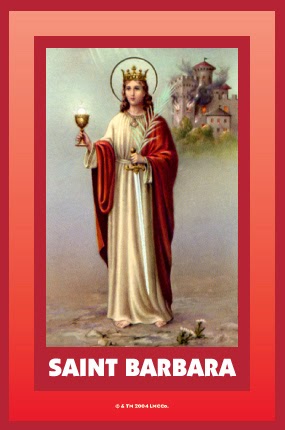 St. Barbara is the patroness of architects, builders, miners and artillery men, and she is invoked against lightning, fire and sudden death.

Prayer of the Church
O GOD, Who among the wonders of Thy might didst grant the victory of Martyrdom also to the weaker sex, graciously grant us that we, by recalling the memory of Thy blessed Virgin and Martyr Barbara, through her example may be led to Thee. Through Christ our Lord. Amen.

Novena in Honor of St. Barbara
Preparatory Prayer
For Each  Novena to a Holy Helper
ALMIGHTY and eternal God! With lively faith and reverently worshiping Thy Divine Majesty, I prostrate myself before Thee and invoke with filial trust Thy supreme bounty and mercy. Illumine the darkness of my intellect with a ray of Thy Heavenly light and inflame my heart with the fire of Thy Divine love, that I may contemplate the great virtues and merits of the Saint in whose honor I make this novena, and following his example imitate, like him, the life of Thy Divine Son.
Moreover, I beseech Thee to grant graciously, through the merits and intercession of this powerful Helper, the petition which through him I humbly place before Thee, devoutly saying, "Thy will be done on earth as it is in Heaven." Vouchsafe graciously to hear it, if it redounds to Thy greater glory and to the salvation of my soul. Amen.
Prayer in Honor of St. Barbara
O GOD, Who didst adorn Thy holy Virgin and Martyr Barbara with extraordinary fortitude in the confession of the Faith, and didst console her in the most atrocious torments; grant us through her intercession perseverance in the fulfillment of Thy law and the grace of being fortified before our end with the holy Sacraments, and of a happy death. Through Christ our Lord. Amen.
Invocation of St. Barbara
INTREPID Virgin and Martyr, St. Barbara, through thy intercession come to my aid in all needs of my soul. Obtain for me the grace to be preserved from a sudden and unprovided death; assist me in my agony, when my senses are benumbed and I am in the throes of death. Then, O powerful patroness of the dying, come to my aid! Repel from me all the assaults and temptations of the evil one, and obtain for me the grace to receive before death the holy Sacraments, that I breathe forth my soul confirmed in faith, hope, and charity, and be worthy to enter eternal glory. Amen.
St. Barbara, at my last end
Obtain for me the Sacrament;
Assist one in that direst need
When I my God and Judge must meet:
That robed in sanctifying grace
My soul may stand before His face.
Prayer
My Lord and God! I offer up to Thee my petition in union with the bitter passion and death of Jesus Christ, Thy Son, together with the merits of His immaculate and blessed Mother, Mary ever virgin, and of all the Saints, particularly with those of the holy Helper in whose honor I make this novena.
Look down upon me, merciful Lord! Grant me Thy grace and Thy love, and graciously hear my prayer. Amen.