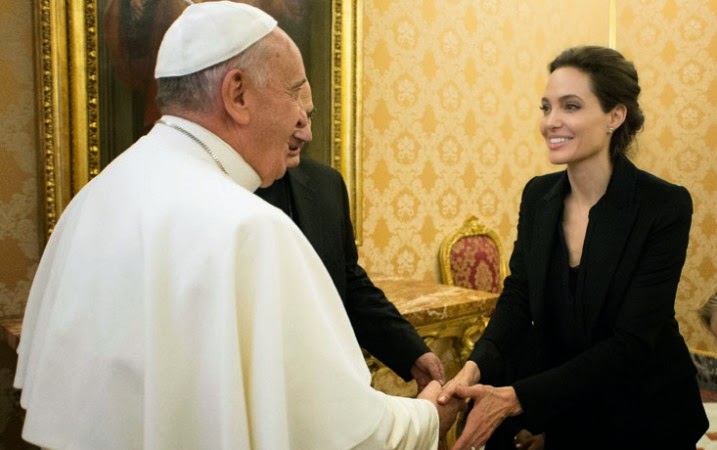 (AP Photo/L'Osservatore Romano)
Angelina Jolie met Pope Francis at the Vatican on January 8. There was a special screening of her movie Unbroken. “Being invited with my film to the Vatican is an honor and a great tribute to the story that I have told in Unbroken,” the actress said in a statement (via Us Weekly). “The story of the hero Louis a great example of strength and forgiveness.” “Pope Francis, knowing the true story of Louis Zamperini, welcomed  Jolie to the Pontifical Academy of Sciences. Angelina hosted the screening with Louis’ son Luke, and also with her two daughters Shiloh and Zahara. Brad Pitt was also supposed to attend but had a “last minute change”.
The Chancellor of Pontifical Academy of Sciences Monsignor Marcelo Sanchez-Sorondo: "Through her work at the U.N. she told him he was a leader for these people and an important help for them. Unbroken made a big impression [on those who saw it at the Vatican today]. It is very significant and a very strong film."  To watch the Trailer and read more about the film Unbroken click Link:
http://jceworld.blogspot.ca/2014/12/wow-angelina-jolie-brought-to-her-knees.html