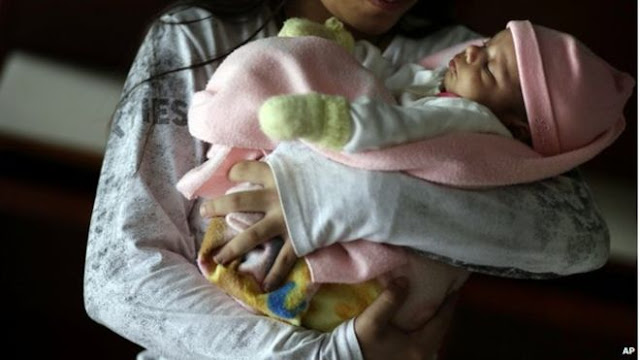 An 11-year old girl who became pregnant after being raped by her stepfather has given birth.Neither the girl nor her daughter experienced health complications during delivery. About 600 girls aged 14 or under become pregnant in the country every year.   The girl, known by the legal pseudonym “Mainumby”, gave birth to a girl weighing 3.55kg (7.8lbs) at the Reina Sofia maternity hospital, a facility run by the Red Cross in Asunción, Paraguay’s capital. The baby was delivered by Caesarean section. Neither the mother nor the child are reported to have experienced any health complications. “It was like any other Caesarean, but with the age difference,” Reina Sofia Director Mario Villalba told local radio.
The case first came to media attention when the girl’s mother took her to hospital in late April because she had begun to experience swelling and stomach pain. At that point, she was only 10 years old and was already over 20 weeks into her term. Her mother had reported as early as January 2014 that her partner was abusing her daughter, but received no response from the authorities. The girl, her two siblings, mother and stepfather shared a rented room in Luque, a town on the outskirts of Asunción. After doctors indicated that the girl was pregnant, her mother requested an abortion but Paraguay, prohibits the procedure unless the pregnancy threatens the life of the mother. Public Health Ministry  that there was “no reason to interrupt the pregnancy”, and argued that it would be “even more dangerous for the girl to undergo a procedure”. Both the girl’s mother and father were arrested, and the girl was taken into the Red Cross hospital. Her mother was subsequently released pending further investigation, and has spent the past 10 days at her daughter’s bedside, according to Elizabeth Torales, Mainumby’s lawyer.  When Pope Francis visited the country in July he avoided any mention of the case, instead dwelling on the role played by Paraguay’s women in rebuilding the country after successive wars, calling them the “most glorious in the Americas" by Paraguay’s women in rebuilding the country after successive wars, calling them the “most glorious in the Americas”.  At least 600 girls aged 14 or under become pregnant in Paraguay every year – whose population numbers little more than six million people.   Red Cross are currently treating two pregnant 12-year-old girls, as well as many others who had been the victims of sexual abuse by relatives.Edited from The Guardian