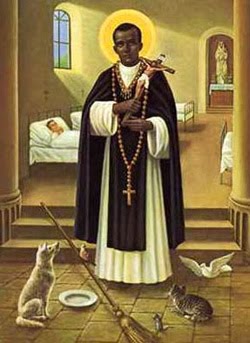 Pope John 23rd chose to remember St. Martin de Porres when he canonized him in 1962. The humble servant of God whose feast day we celebrate on November 3rd, was born in Peru in 1579. He was the son of a nobleman and a young freed slave, and grew up in poverty. Aged 11 he became a sevant in the Dominican priory in Lima, and promoted to almoner, he begged money from the rich to support the poor and sick. Placed in charge of the Dominican's infirmary; known for his tender care of the sick and for his spectacularcures, his superiors dropped the stipulation that "no black person may be received to the holy habit or profession of the and Martin took vows as a brother. He established an and 's for the of the slums. He set up a for the stray and . Martin lived in self-imposed austerity and spent much time in prayer and meditation. He knew St. Rose of Lima. (Vatican.va)