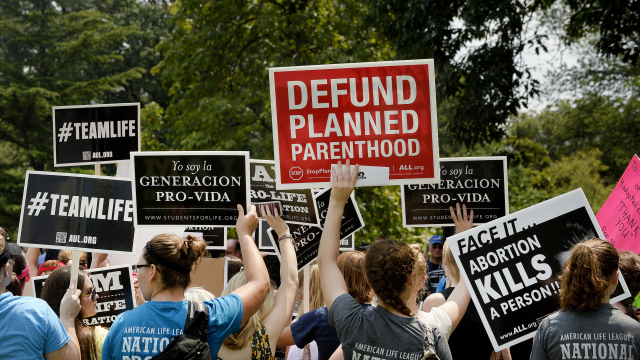 BREAKING: U.S. Senate votes to defund Planned Parenthood Throughout the day, the mainstream media has been reporting that the Senate was expected to vote in favor of repealing ObamaCare and stripping Planned Parenthood of federal funding for one year. And now it’s been done. Today, the U.S. Senate has succeeded in voting to defund Planned Parenthood of taxpayers’ hard-earned dollars, by a vote of 52 to 47. While the pro-abortion White House had earlier promised to issue a veto, the Senate still voted to approve the bill. NBC reports: Republicans drove legislation toward Senate approval Thursday that would demolish President Barack Obama’s signature health care law and block Planned Parenthood’s federal money, edging toward a veto fight the GOP knows it will lose but believes will delight conservative voters in next year’s elections.
This vote is the first time that the Senate has successfully voted to strip Planned Parenthood’s federal funding, sending it instead to more worthy health care centers that serve low-income women and their families. (Find a center here.) In fact, this bill increases funding to community and federally qualified health centers, proving that pro-life Americans do practically care about the health of women. Senator James Lankford (R-OK), who voted in favor of defunding Planned Parenthood explained:
We understand we have a president that strongly supports Planned Parenthood and what they do. We get that. But we also don’t want this issue to go away. We want to continue to be able to raise it over and over again and say, “Is this what Americans really believe?” DefundAd-400b Sign this petition to join more than 400,000 others who are urging our government to permanently defund Planned Parenthood. One of the front-running presidential candidates, Senator Ted Cruz made his own statement after the vote:
Since before my first day in office, I pledged to do everything within my power to repeal Obamacare. And over the last three years, I’ve worked day and night to do exactly that, sometimes to the dismay of those in Washington. …
I am also encouraged that this bill prohibits taxpayer funds from going to abortion-providers. …
Senate Majority Leader Mitch McConnell commented on ObamaCare, which the bill repeals in large part:
It’s defined by failure. It’s punctuated with hopelessness. And the scale of its many broken promises is matched only by the scale of its defenders’ rigid and unfeeling responses to them.
ObamaCare has been riddled with problems, not only for everyday Americans struggling to provide health care for their families, but also for pro-life organizations, companies, and individuals who reject the idea that the government can force them to fund abortion or abortifacient birth control.
ABC reports that “Senate Republicans have overwhelmed Democrats in a vote to end Planned Parenthood’s federal funding,” but this vote is a victory for all Americans. The majority of our elected national leaders have joined together to say that enough is enough. Planned Parenthood has violated the trust of women, offended the sensibilities of a compassionate nation, and deceived the general public for far too long. This Senate vote demonstrates that women do not need the abortion giant; over 13,000 community health centers (as well as thousands of pregnancy resource centers and groups) stand ready to serve them without performing the abortions that take the lives of our nation’s youngest members.
Today, the Senate stood up for the people of our nation, taking action to prevent the mistreatment of women and the dehumanization of children that is committed by Planned Parenthood every day. Today, we can be proud to be Americans. Release from LIVE ACTION NEWS