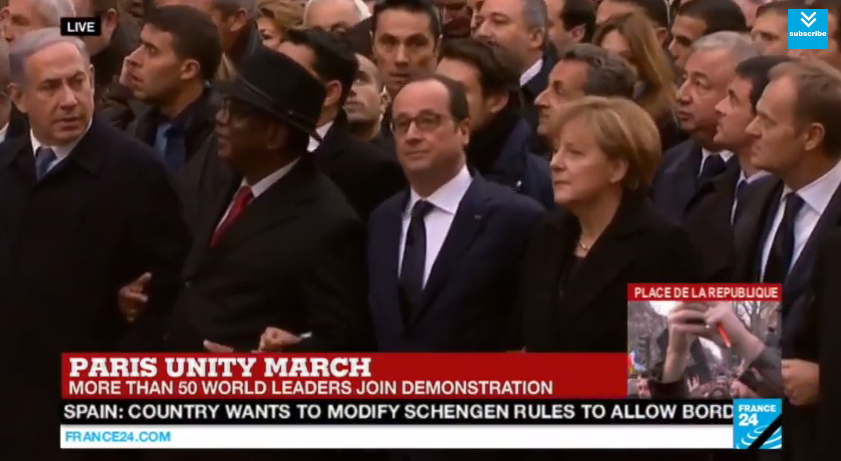 World leaders walked in 'unity march' in France on Sunday January 11, 2015 at 3pm. After the rally, Hollande and Israel's President Netanyahu went to a Paris synagogue. Over 1 Million people joined in the march against terrorism.  Many world leaders were present including, French President Francois Hollande who led them and several who linked arms. At the front was Dalil Boubakeur, the rector of the Great Mosque of Paris, British Prime Minister David Cameron, German Chancellor Angela Merkel and Spanish Prime Minister Mariano Rajoy.  Merkel was photographed leaning her head on Hollande's shoulder. Russian Foreign Minister Sergey Lavrov, Turkish Prime Minister Ahmet Davutoglu, and Jordan's King Abdullah II and Queen Rania were also at the rally. Palestinian Authority President Mahmoud Abbas and Netanyahu also joined at the front.  2,300 police officers, as well as paramilitary forces, were be deployed for safety. 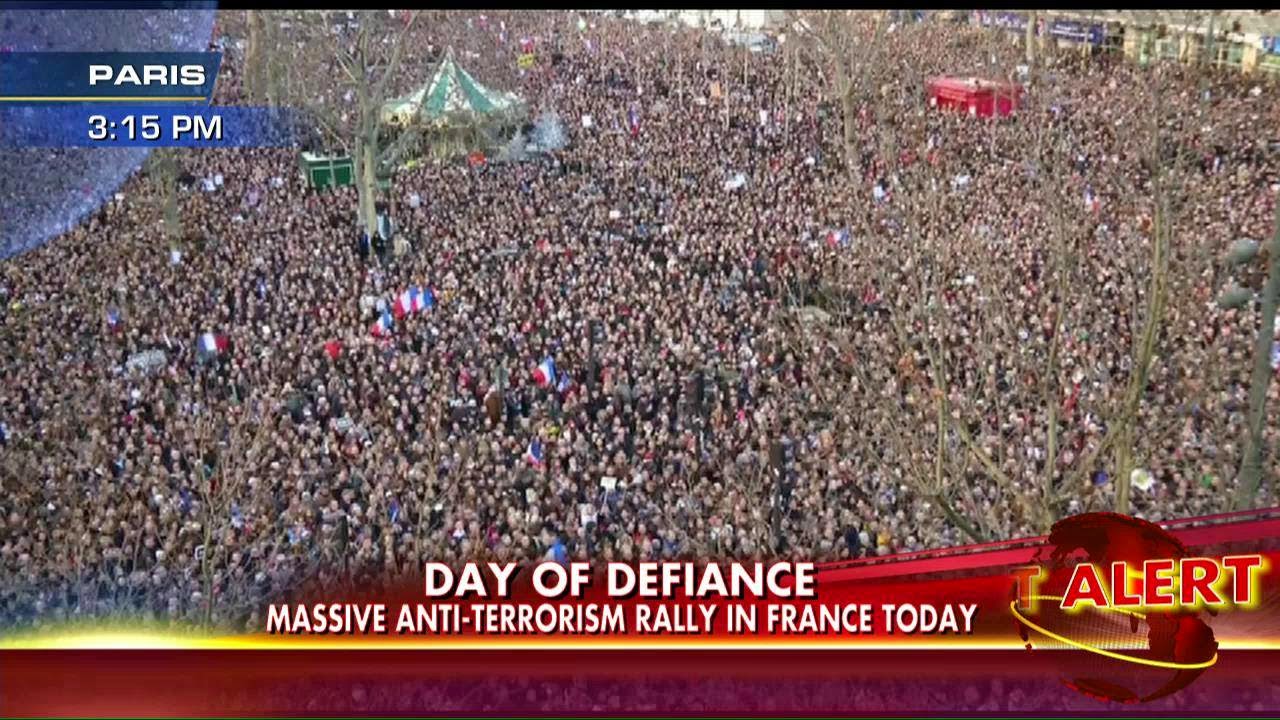 Posted by Jesus Caritas Est at 3:02 PM No comments:

Pope Francis “the Holy Spirit, who entirely animated the life and ministry of Jesus, is the same Spirit..." Angelus 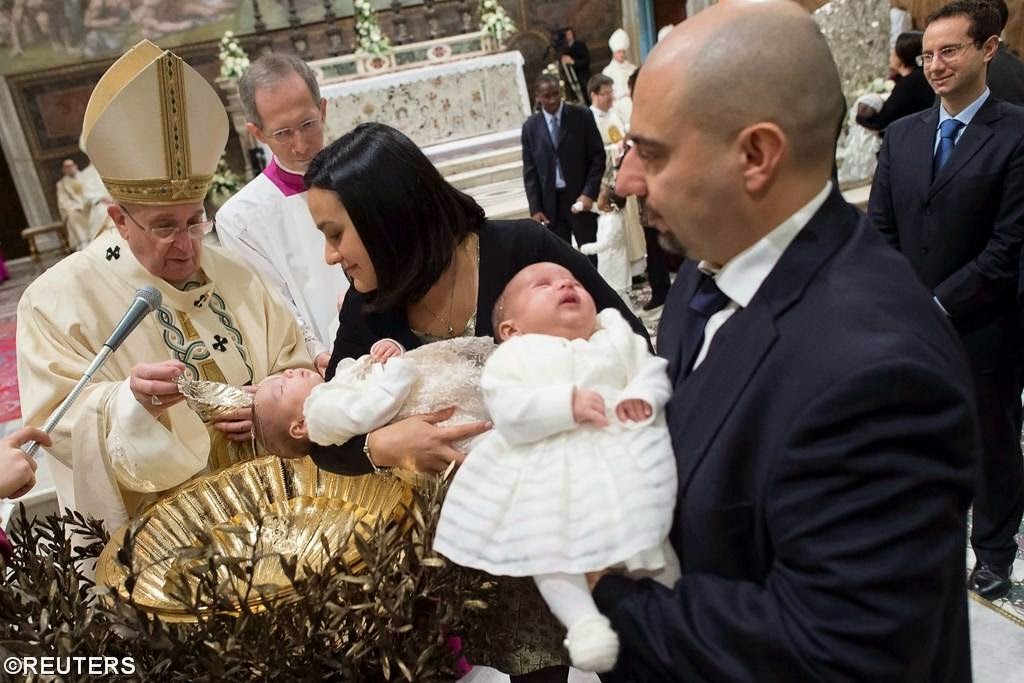 (Vatican Radio) Remember to pray to the Holy Spirit: this was the message Pope Francis had for pilgrims and tourists who braved the drear and drizzle of a January morning in Rome, to gather in St Peter’s Square beneath the window of the Papal apartments in the Apostolic Palace and pray the Angeluswith the Holy Father on this Sunday – the Solemnity of the Baptism of the Lord and the conclusion of the liturgical season of Christmas. Noting that the descent of the Holy Spirit at Christ’s baptism in the Jordan is the sign by which the Lord begins His public teaching ministry, Pope Francis said, “We often pray to Jesus, we pray to the Father, especially when we pray the “Our Father” – but not so frequently do we pray to the Holy Spirit – it is true, no? – He is the Forgotten One.” The Holy Father went on to say, “We need to ask for His help, His strength, His inspiration,” explaining, “the Holy Spirit, who entirely animated the life and ministry of Jesus, is the same Spirit who now leads Christian existence, the existence of [every] man and woman who say they are and want to be Christians.”

Earlier in the day, Pope Francis marked the Solemnity of the Baptism of the Lord with Mass in the Sistine Chapel, during the course of which he baptized eleven infants.
In his homily, the Holy Father focused on three related themes: on the Word of God as nourishment for the soul; on faith as an intrinsically and essentially ecclesial reality – something that is “of the Church” and into which we are incorporated in baptism; on the anointing that is part of baptism, and therefore on the sacrament as one of royal, prophetic and priestly consecration. Departing from his prepared text, the Holy Father offered some homiletic reflections on the importance of prayer – especially of prayer to the Holy Spirit – in the life of Christians. “It is so very important to pray to the Holy Spirit,” he said, “for the Spirit teaches us to carry forward the family, the children – He makes it possible to see that the children grow up in the atmosphere of the Holy Trinity.” The Pope went on to say, “It is precisely the Spirit who leads them forward – and this is why we need not forget to invoke the Holy Spirit often, every day.”
Posted by Jesus Caritas Est at 2:31 PM No comments:

What is Baptism - A Gift of God - SHARE with Everyone 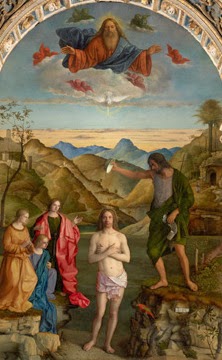 THE SACRAMENT OF BAPTISM
1213 Holy Baptism is the basis of the whole Christian life, the gateway to life in the Spirit (vitae spiritualis ianua),4 and the door which gives access to the other sacraments. Through Baptism we are freed from sin and reborn as sons of God; we become members of Christ, are incorporated into the Church and made sharers in her mission: "Baptism is the sacrament of regeneration through water in the word."5
IMAGE: Giovanni Bellini (Venice, c. 1432 - Venice, 1516) Baptism of Christ 1501)


Father, you give us grace through sacramental signs,
which tell us of the wonders of your unseen power.In Baptism we use your gift of water,
which you have made a rich symbol
of the grace you give us in this sacrament.11

CATECHISM OF THE CATHOLIC CHURCH
Posted by Jesus Caritas Est at 10:50 AM No comments:


Full Video of Mass Below. Radio Vaticana: Pope Francis observe a papal tradition on Sunday, the feast of the Baptism of Lord, baptizing 33 infants during a Mass amid the splendor of Michelangelo’s ‎frescos in the Vatican’s famed Sistine Chapel.  The 12 male and 21 females are children of Vatican ‎employees.   Pouring water over their heads, he will formally welcome the babies as members of the Catholic Church.  The commemoration of the Baptism of Jesus by St. John the Baptist in the River Jordan, marks the end of Christmas season in the liturgical calendar of the Catholic Church, and the start of Ordinary Time.    The Sistine Chapel is the venue where cardinals gather for a conclave to elect a new pope.  Argentine Cardinal Jorge Bergoglio was elected Pope Francis there on March 13, 2013.
Posted by Jesus Caritas Est at 7:32 AM No comments: