Archdiocese of Melbourne Release: Wednesday 1 April 2015 Natasha Marsh, Catholic Archdiocese of Melbourne POLICE and fire crews are investigating a suspicious fire at St Mary’s Catholic Church on Foster Street in Dandenong. It is thought two separate fires were lit in the church, one at the altar and the other in the storeroom where the vestments are kept. Emergency services were called at 2.30am. It took the team of nearly 40 firefighters over an hour to control the blaze. The fire caused $250,000 worth of heat and smoke damage to the building. Thankfully, the church was not destroyed. Parishioners of St Mary’s will attend Easter Masses and services in a makeshift hall at the nearby St Mary’s school. This is the third fire of its kind to occur in three days. The heritage-listed church of St James in Brighton was almost destroyed after a fire raged during the early hours of Monday 30 March. Although over 20 fire trucks and 80 firefighters battled the blaze, they were only able to save the façade of the 124 year-old building. Just hours after the fire at St James, detectives were called to St Mary’s Church in St Kilda East, they were called to investigate a singed door. It is believed the fire that caused this was deliberately lit between Sunday night and Monday morning. There has been speculation that the three fires are linked. Although, this has not been confirmed by authorities all three fires are being treated as ‘suspicious’ by the police. Shane Healy, Director of Media and Communications for the Catholic Archdiocese of Melbourne, said that until more is known it is ‘best not to speculate’. ‘We would like to do what we can to allow the police to get on with their jobs.’Shared from Archdiocese of Melbourne
Posted by Jesus Caritas Est at 8:09 PM No comments: 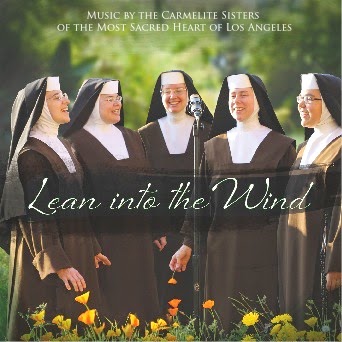 The Carmelite Sisters of the Most Sacred Heart of Los Angeles have made their  seventh CD called Lean Into the Wind. It provides chant, praise and worship and contemporary music. The album contains 14 songs, with 12 original compositions.  The order came to the United States from Mexico in 1927, and now the order has grown to include 138 sisters. They are based in Alhambra, California, the sisters also have sites in other parts of California, Arizona, Colorado and Florida. 12 sisters who sang on the recording.

"With their rich harmonies, the Carmelite Sisters of the Sacred Heart of Los Angeles lift our hearts to prayer and praise. Their songs are an inspiration to me, and I hope to all of us, to give thanks for the beauty of creation and for all God’s blessings in our lives. May we join our voices with theirs and renew our desire to share God’s mercy and love with our neighbors and build his Kingdom, until this world is filled with God’s glory."

Most Reverend José H. Gomez, Archbishop of Los Angeles
The money made from the CD will fund their apostolates in health care, education and retreats. The order has a three-fold mission of “Educating for Life with the Mind and Heart of Christ” in schools, being “At the Service of the Family for Life” through elder healthcare and “Promoting a Deeper Spiritual Life Among God’s People” through individual and group retreats. The way of life of the Carmelite Sisters of the Most Sacred Heart of Los Angeles is rooted in the Gospel, the Church, and the spirituality of Carmel as lived out through the charism of our foundress, Venerable Mother Maria Luisa Josefa of the Most Blessed Sacrament. In His merciful goodness, God has graced our Institute with the Carmelite charism which has its foundation in a long history and living tradition. We are called by God to be a presence inflamed within our world, witnessing to God’s love through prayer, joyful witness and loving service. Our mission is a God-given mission which overflows from each sister’s profound life of prayer. TheLean into the Wind CD springs from our mission to promote a deeper spiritual life. Music touches the soul in profound ways and can open doors that have been shut to the written or spoken word. The proceeds from this CD will benefit our various ministries and we are grateful for your support, however our deepest desire for this music is that it would reach souls and draw them closer to Christ. To learn more about the Carmelite Sisters please visit our website: www.carmelitesistersocd.com (Edited from the Sisters website)
Posted by Jesus Caritas Est at 6:20 PM No comments:

#PopeFrancis "I make a heartfelt appeal to the international community..."


(Vatican Radio) Pope Francis has appealed to the international community to take swift and decisive action to avoid more tragedies of migrants seeking a better life.
His heartfelt cry to the world came following news of the sinking of yet another boat carrying migrants in the Mediterranean Sea in which it is feared 700 people may be dead.The Pope was speaking on Sunday morning after the Regina Coeli prayer in St. Peter’s Square, where he told tens of thousands of people “They are men and women like us, our brothers seeking a better life, starving, persecuted, wounded, exploited, victims of war. They were looking for a better life".
Faced with such a tragedy – Pope Francis continued - I express my most heartfelt pain and promise to remember the victims and their families in prayer.
"I make a heartfelt appeal to the international community to react decisively and quickly to see to it that such tragedies are not repeated," he said, before asking the crowd to pray "for these brothers and sisters".
The latest disaster happened when a boat carrying migrants capsized off the Libyan coast overnight, in one of the worst disasters seen in the Mediterranean migrant crisis.
Just Saturday Pope Francis joined Italian authorities in pressing the European Union to do more to help the country cope with rapidly mounting numbers of desperate people rescued in the Mediterranean during journeys on smugglers' boats to flee war, persecution or poverty.
While hundreds of migrants took their first steps on land in Sicilian ports, dozens more were rescued at sea. Sicilian towns were running out of places to shelter the arrivals, including more than 10,000 in the week ending Saturday.
Since the start of 2014, nearly 200,000 people have been rescued at sea by Italy.
Italy says it will continue rescuing migrants but demands that the European Union increase assistance to shelter and rescue them. Since most of the migrants want to reach family or other members of their community in northern Europe, Italian governments have pushed for those countries to do more, particularly by taking in the migrants while their requests for asylum or refugee status are examined.
Posted by Jesus Caritas Est at 4:29 PM No comments:

Catholic Quote to SHARE by Saint John Paul II - "Those who sincerely say "Jesus, I trust in You'.... 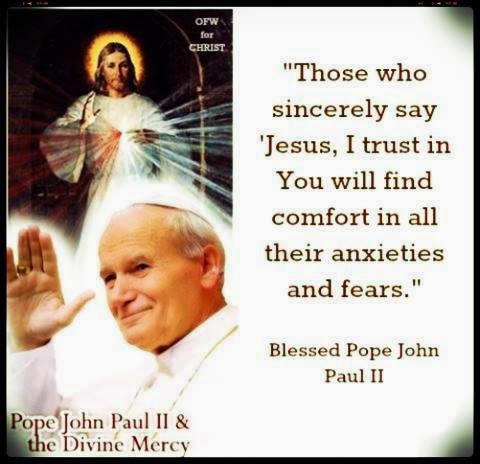 "Those who sincerely say 'Jesus, I trust in You' will find comfort in all their anxieties and fears." Saint John Paul II

Posted by Jesus Caritas Est at 3:07 PM No comments: 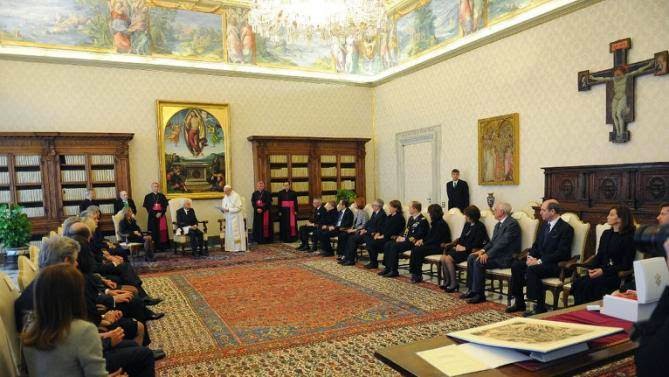 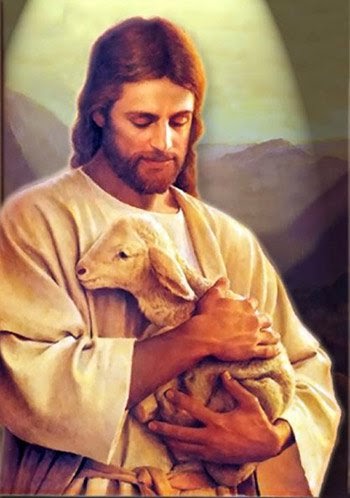 Peter said to the people:
“The God of Abraham,
the God of Isaac, and the God of Jacob,
the God of our fathers, has glorified his servant Jesus,
whom you handed over and denied in Pilate’s presence
when he had decided to release him.
You denied the Holy and Righteous One
and asked that a murderer be released to you.
The author of life you put to death,
but God raised him from the dead; of this we are witnesses.
Now I know, brothers,
that you acted out of ignorance, just as your leaders did;
but God has thus brought to fulfillment
what he had announced beforehand
through the mouth of all the prophets,
that his Christ would suffer.
Repent, therefore, and be converted, that your sins may be wiped away.”

My children, I am writing this to you
so that you may not commit sin.
But if anyone does sin, we have an Advocate with the Father,
Jesus Christ the righteous one.
He is expiation for our sins,
and not for our sins only but for those of the whole world.
The way we may be sure that we know him is to keep
his commandments.
Those who say, “I know him,” but do not keep his commandments
are liars, and the truth is not in them.
But whoever keeps his word,
the love of God is truly perfected in him.

The two disciples recounted what had taken place on the way,
and how Jesus was made known to them
in the breaking of bread.

While they were still speaking about this,
he stood in their midst and said to them,
“Peace be with you.”
But they were startled and terrified
and thought that they were seeing a ghost.
Then he said to them, “Why are you troubled?
And why do questions arise in your hearts?
Look at my hands and my feet, that it is I myself.
Touch me and see, because a ghost does not have flesh and bones
as you can see I have.”
And as he said this,
he showed them his hands and his feet.
While they were still incredulous for joy and were amazed,
he asked them, “Have you anything here to eat?”
They gave him a piece of baked fish;
he took it and ate it in front of them.

He said to them,
“These are my words that I spoke to you while I was still with you,
that everything written about me in the law of Moses
and in the prophets and psalms must be fulfilled.”
Then he opened their minds to understand the Scriptures.
And he said to them,
“Thus it is written that the Christ would suffer
and rise from the dead on the third day
and that repentance, for the forgiveness of sins,
would be preached in his name
to all the nations, beginning from Jerusalem.
You are witnesses of these things.”
Posted by Jesus Caritas Est at 4:21 AM No comments: