Catholic #Quote to SHARE "Anyone who goes to Mary and prays the Rosary cannot be touched by Satan." 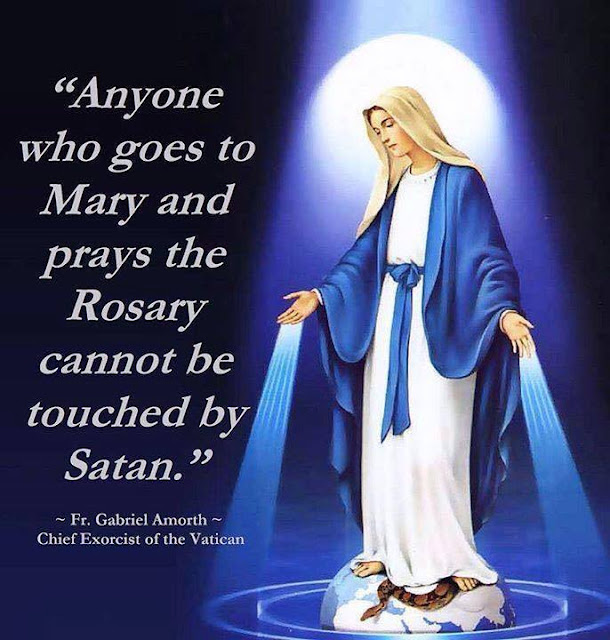 "Anyone who goes to Mary and prays the Rosary cannot be touched by Satan." Fr. Gabriel Amorth - Chief Exorcist of the Vaitcan
Posted by Jesus Caritas Est at 9:24 PM No comments: 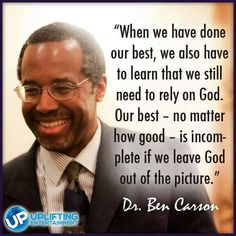 Republican presidential candidate Ben Carson was at the Iowa State Fair Sunday and called Americans to talk about God.

“We have to stop listening to these people who tell us that we cannot talk about God, we cannot talk about our faith,” GOP candidate Dr. Carson.
“I wonder, do they realize that our founding document, our Declaration of Independence, talks about certain inalienable rights given to us by our Creator – aka God?” he asked.
Carson explained the references to God in the pledge of allegiance, in U.S. courtrooms, and on currency.
“So, if it’s in our founding documents, it’s in our pledge, it’s in our courts and it’s on our money, but we’re not supposed to talk about it, what in the world is that?” he said. “In medicine we call it schizophrenia, a form of craziness.”
Carson said it was time for Americans “to realize that there’s nothing wrong with living by godly principles – of loving your fellow man, caring about your neighbor, developing your God-given talents to the utmost so that you become valuable to the people around you, having values and principles that govern your life.”
“And if we do that,” he concluded, “not only will we remain a pinnacle nation, but we will truly have one nation, under God.”
“They are American problems versus un-American, and we have got to remember that we are Americans first,” he said. Edited from CNS news.
Posted by Jesus Caritas Est at 7:51 PM No comments: 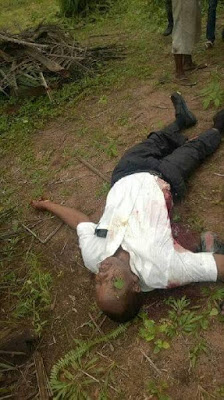 AFRICA/NIGERIA - Claretian Missionary priest killed in road ambush Abuja (Agenzia Fides)- A Claretian father in Nigeria has been killed. Fr Dennis Osuagwu was murdered in Nekede on 15 August, according to news sent to Fides by the General House of the Missionary Sons of the Immaculate Heart of Mary, known as the Claretians after founder St Anthony Claret. “At the moment we have no further information regarding the circumstances of our brother’s death” the general house told Fides. According to the Nigerian press, Fr. Osuagwu was ambushed and killed while travelling on the Nekede Avu Road. The Claretian Missionary who was serving in the archdiocese of Owerri, in southern Nigeria, was also on the staff of Imo Polytechnic School, in Enwerem. Reportedly the local police are considering some sort of internal dispute at the School as possible motivation for Fr. Osuagwu’s brutal murder. (L.M.) (Agenzia Fides 17/8/2015) Image Source: genechy.com
Posted by Jesus Caritas Est at 7:31 PM No comments: 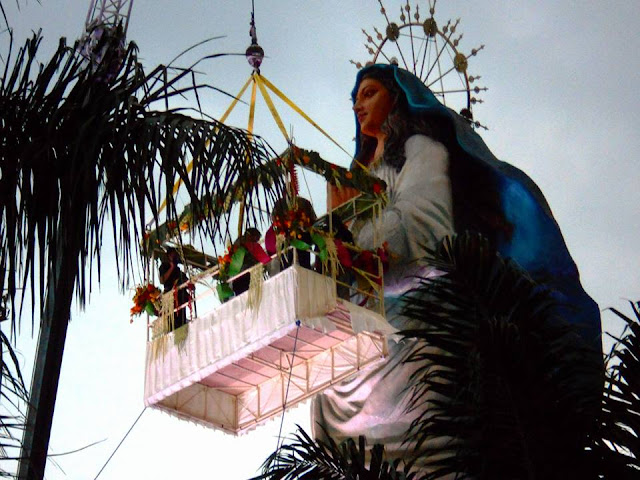 Central Java unveils "world's tallest" statue of Our Lady: 42 metersThe monument located near "gua Maria" Marian shrine in a cave of Central Java. At least 30 thousand people came to the blessing of the statue, officiated by the Archbishop of the diocese of Ambarawa. A week ago, the Sanctuary hosted an interfaith conference.Ambarawa (AsiaNews) - At least 30 thousand people, from hundreds of parishes, gathered Sunday to "gua Maria" (the grotto of Mary) in Ambarawa for the blessing of the world’s tallest statue of Our Lady. The unveiling marked the 61st anniversary of the Marian shrine, the second most important of Central Java. Seven bishops presided over the Mass, along with 15 priests of the Archdiocese of Semarang. At the end of the liturgy, Archbishop Johannes Pujasumarta, using a crane, sprinkled holy water the statue of Our Lady of the Assumption, which is 42 meters high.

Three local religious who are sculptors - Kuncoro (45), Adi Nugroho (40) and Agung Hartanto (38) - designed the monument, which is located near the sanctuary. The trio is famous for having created dozens of statues with a religious theme throughout the country.

Veronica Angkatirta, a Catholic woman from Jakarta, told AsiaNews: "It was a spectacular view thousands of Catholics from all over Java and other islands, who came here to celebrate their faith in Jesus through Mary" . The pilgrims were much more than those predicted by the organizers. The distribution of the sacraments was possible only for 20 thousand people and the food packages were prepared 6 thousand.

A week before the celebration, the Archbishop of Semarang and Fr. Aloysius Budi Purnomo, head of the interfaith archdiocese, organized an interfaith meeting with authorities at "gua Maria". The conference, also supported by all political parties of the government of Ambarawa, included  some Muslim leaders, along with their students, who performed a Sufi dance in the shadow of the statue of the Assumption.

In a public statement, the bishop thanked those who made it possible that "tens of authorities of all religions come together from a week before the inauguration of the statue of the Assumption. The local government of Ambarawa has encouraged citizens to welcome the thousands of pilgrims who will come to visit Gua Karep Ambrawa in the coming days".
Shared from Asia News IT
Posted by Jesus Caritas Est at 2:41 PM No comments: 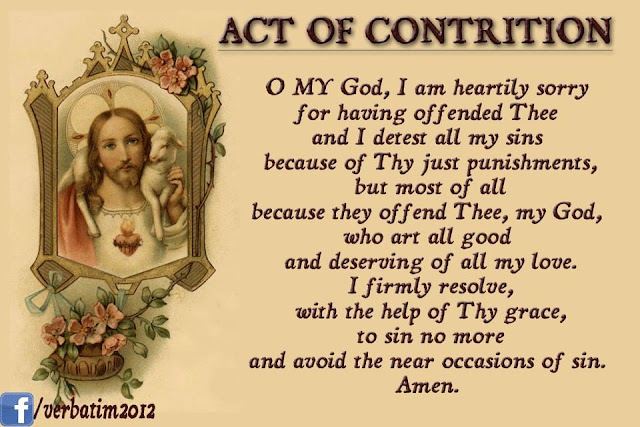 Monday of the Twentieth Week in Ordinary Time
Lectionary: 419

The children of Israel offended the LORD by serving the Baals.
Abandoning the LORD, the God of their fathers,
who led them out of the land of Egypt,
they followed the other gods of the various nations around them,
and by their worship of these gods provoked the LORD.

Because they had thus abandoned him and served Baal and the Ashtaroth,
the anger of the LORD flared up against Israel,
and he delivered them over to plunderers who despoiled them.
He allowed them to fall into the power of their enemies round about
whom they were no longer able to withstand.
Whatever they undertook, the LORD turned into disaster for them,
as in his warning he had sworn he would do,
till they were in great distress.
Even when the LORD raised up judges to deliver them
from the power of their despoilers,
they did not listen to their judges,
but abandoned themselves to the worship of other gods.
They were quick to stray from the way their fathers had taken,
and did not follow their example of obedience
to the commandments of the LORD.
Whenever the LORD raised up judges for them, he would be with the judge
and save them from the power of their enemies
as long as the judge lived;
it was thus the LORD took pity on their distressful cries
of affliction under their oppressors.
But when the judge died,
they would relapse and do worse than their ancestors,
following other gods in service and worship,
relinquishing none of their evil practices or stubborn conduct.

A young man approached Jesus and said,
“Teacher, what good must I do to gain eternal life?”
He answered him, “Why do you ask me about the good?
There is only One who is good.
If you wish to enter into life, keep the commandments.”
He asked him, “Which ones?”
And Jesus replied, “You shall not kill;
you shall not commit adultery;
you shall not steal;
you shall not bear false witness;
honor your father and your mother;
and you shall love your neighbor as yourself.”
The young man said to him,
“All of these I have observed. What do I still lack?”
Jesus said to him, “If you wish to be perfect, go,
sell what you have and give to the poor,
and you will have treasure in heaven.
Then come, follow me.”
When the young man heard this statement, he went away sad,
for he had many possessions.
Posted by Jesus Caritas Est at 1:56 PM No comments: