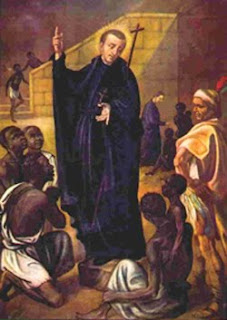 Died: September 8, 1654, Cartagena, Colombia
Canonized: January 15, 1888, Rome by Pope Leo XIII
Major Shrine: Church of Saint Peter Claver
Patron of: Slaves, Colombia, Race relations, and African Americans
The Blessed Peter Claver was born at Verdu in Catalonia in the year 1581, of parents eminent for piety and virtue, who instilled like qualities into his infant heart from the very cradle. In youth his piety and love of study won general admiration, and every preferment was open to him, but zeal for his neighbor's salvation led him to enter the Society of Jesus. His reputation was such that he was instantly admitted on his application in August, 1602. After a fervent noviceship, he was sent to the college of Majorca and there had the inexpressible happiness of enjoying the direction of the Blessed Alphonsus Rodriguez, then porter of the college, an eminent contemplative, from whom Claver derived much spiritual profit, and even a knowledge of his future career. Before completing his studies, he solicited the American mission, and was sent out in 1610. From that time he never asked about Spain, and seemed to have forgotten everything but the land of his labors. Completing his studies at Santa Fe de Bogota, he was ordained at Carthagena in 1615, and from that moment devoted himself to the care of the Negro slaves. No sooner did a slaver reach the port than he hastened on board with his interpreters, a basket of delicacies for the sick, and other necessaries. The sick were the first objects of his zeal. Gaining their good will by his kind and gentle manner, he instructed them in the doctrines of Christianity; and if there was danger, baptized them. He then began his regular instructions for those in health, which he continued from day to day, till they were prepared for baptism. Then, on an appointed day, he administered the sacrament to all, after a touching exhortation to persevere in virtue, The amount of his toil may be conceived, when we learn that at that time ten or twelve thousand slaves were annually landed at Carthagena. Nor did this include all, as many slavers, to avoid the custom-house duties, landed their cargo on the coast and pretended that they belonged to former licensed importations, and were already baptized. The zeal of the servant of God was more active than the interest of the government officers; he discovered most of these Negroes, instructed and baptized them. Not wearied with these labors, he visited the hospitals, and especially that of the Incurables and Lepers, whom he nursed with the greatest charity. The poor forsaken Negroes, too, in their hovels, were never too forlorn or too distant to escape him. So long did he breathe the pestiferous atmosphere of these abodes of misery, that his taste and smell were entirely lost. Besides all this, his austerities were frightful: his life was a miracle, as nothing but a miracle could have sustained it in such a climate, where a scratch is often fatal. Over the Negroes, he maintained a general direction; he had regular masses, instructions and devotions for them; he was their pastor, their father, their protector. In their behalf he frequently exercised the miraculous powers with which God, in a most eminent degree, invested him. Among the Spaniards he labored reluctantly, as they had clergy in abundance; but the poor could always have recourse to him, and for them, as for Moors, and heretics or unbelievers, he spared no toil.
During the season when slavers were not accustomed to arrive, he traversed the country, visiting plantation after plantation, to give spiritual consolation to the slaves. For a time, also, he was sent to labor among the Indians near the Isthmus, the field of the labors of St. Louis Bertrand, but, being seized with a fatal fever, he was carried back to Carthagena; there, partly recovering, he renewed his labors, but was again prostrated, and for the last four years of his life was scarcely able to move. Such was the poverty and wretchedness of the Jesuits, that he had no attendant but a Negro boy, and men were actually tearing down the house when he died, on the 8th of September, 1654, at the age of 72, a faithful imitator of the great Xavier. His canonization was immediately undertaken and almost brought to a close in 1747; but the suppression of his order and the troubles in Europe deferred the publication of the brief till the 29th of August, 1848, when he was solemnly beatified by Pope Pius IX. Shared from EWTN
Posted by Jesus Caritas Est at 1:16 PM No comments: