(Vatican Radio)  Pope Francis says that we must learn to not judge others or we all risk becoming hypocrites including the Pope himself. At the same time, he said, we need to have the courage to acknowledge our own faults in order to become merciful towards others. The Pope’s comments came during his homily on Friday (11th September) at the morning Mass in the Santa Marta residence.
Pope Francis’s homily was a reflection taken from St Paul’s teaching on mercy, forgiveness and the need to avoid judging others. He said the Lord speaks to us about the reward contained within this: do not judge and you will not be judged. Do not condemn and you will not be condemned.
Have the courage to acknowledge our own faults
“But we can say: ‘So, this is all fine, isn’t it?’ And each of us can say: ‘Yes Father, this is all fine but how can it actually be done, where does one start with this?’  And what’s the first step for going along this path?’  We see that first step in today’s first Reading, in the Gospel. The first step is to acknowledge our own faults. The courage to acknowledge this before accusing others.  And Paul praises the Lord because he chose him and gives thanks because ‘he has judged me trustworthy, even though I used to be a blasphemer and a persecutor and a violent man.’ But this was mercy.”
Beware of being hypocrites, from the Pope downwards
Quoting from Christ’s words to take the log out of our own eye first, Pope Francis stressed that it is essential to acknowledge our own faults before we can see clearly enough ‘to take the splinter out of our brother’s eye.’
“And Jesus uses that word that he only uses with those who are two-faced, with two minds: ‘Hypocrites! Hypocrite.  Men and women who can’t learn how to acknowledge their own faults become hypocrites. All of them? All of them: starting from the Pope downwards: all of them. If a person isn’t able to acknowledge his or her faults and then says, if it’s necessary, who we should be telling things about other people, that person is not a Christian, is not part of this very beautiful work of reconciliation, peace-making, tenderness, goodness, forgiveness, generosity and mercy that Jesus Christ brought to us.”
The Pope went on to urge us to stop ourselves in time when we are tempted to speak badly about others.
“When we get tempted to talk to people about the faults of others, we must stop ourselves. And me? And have the courage that Paul had, here: ‘I used to be a blasphemer, a persecutor, a violent man’…  But how many things can we say about ourselves? Let’s refrain from comments about others and let’s comment about ourselves. And this is the first step along this path of magnanimity. Because a person who can only see the splinters in the eyes of others, falls into pettiness: a petty mind, full of pettiness, full of chatter.”
Pope Francis concluded his homily saying let us ask the Lord to give us the grace to follow Jesus’ advice to be generous with forgiveness and generous with mercy, adding that a person who has never spoken badly about others, should be canonized immediately.
Posted by Jesus Caritas Est at 5:39 PM No comments:

Latest #News from #Vatican Information Service and #PopeFrancis at #HolySee 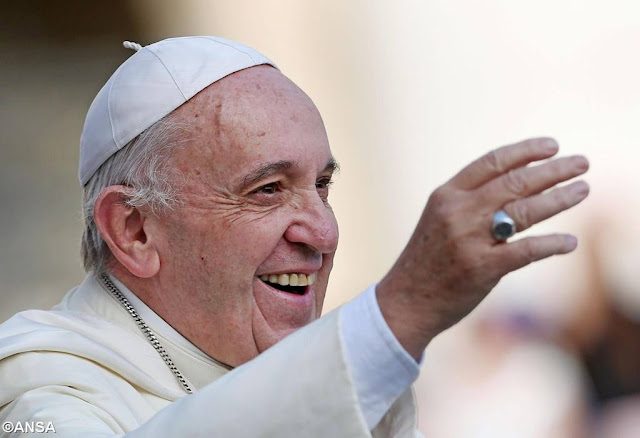 Posted by Jesus Caritas Est at 5:36 PM No comments:

Friday of the Twenty-third Week in Ordinary Time
Lectionary: 441

I am grateful to him who has strengthened me, Christ Jesus our Lord,
because he considered me trustworthy
in appointing me to the ministry.
I was once a blasphemer and a persecutor and an arrogant man,
but I have been mercifully treated
because I acted out of ignorance in my unbelief.
Indeed, the grace of our Lord has been abundant,
along with the faith and love that are in Christ Jesus.