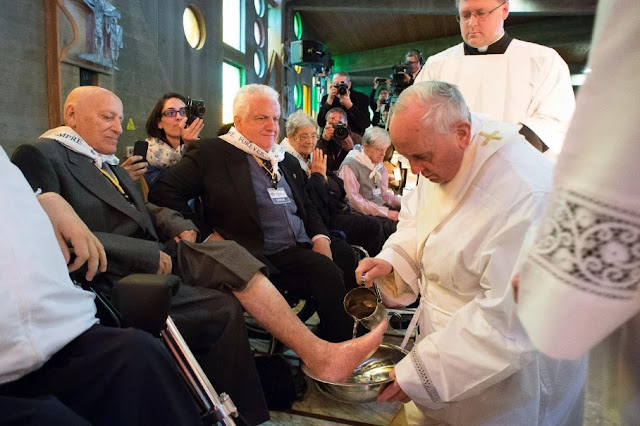 atican Radio) Pope Francis celebrated the Missa in coena Domini on Holy Thursday evening, at the CARA Welcome and Hospitality Centre operated by the Auxilium cooperative. Located a short distance outside the Rome city limits, in Castelnuovo di Porto, the Centre provides temporary lodging and services to nearly 900 asylum seekers from 25 different countries.

In his homily, Pope Francis renewed his condemnation of those who – like Judas Iscariot – sow  discord for gain and trade in arms, selling the tools of bloodshed for profit. The Holy Father also spoke of the communicative power of concrete actions, saying that gestures of fraternity, concord and peace among people of different religion and cultural tradition who truly desire peace and resolve to live as brothers and sisters is a powerful witness to a world sorely in need of such signs.
Below, please find Vatican Radio’s English translation of the Holy Father’s remarks
******************************************
Gestures speak louder than pictures and words. There are, in the Word of God we read, two gestures: Jesus serving, washing the feet ... He, who was the “head man”, washing the feet of others, of His own, even of the least; one gesture. The second gesture: Judas who goes to the enemies of Jesus, those who do not want peace with Jesus, to take the money that bought His betrayal; the 30 pieces of silver.
Two gestures.
Even today, here, there are two gestures: this, of all of us together, Muslims, Hindus, Catholics, Copts, Evangelical [Protestants] brothers and sisters – children of the same God – we want to live in peace, integrated. One gesture. Three days ago, an act of war, of destruction in a European city, by people who do not want to live in peace. Though behind that gesture, as there were behid that of Judas, there were others. Behind Judas there were those who offered money, that Jesus be delivered up to them. Behind that [other] gesture [on Tuesday in Belgium], there are manufacturers, arms dealers who want blood, not peace; they want the war, not fraternity.
Two gestures, just the same: Jesus washes feet, Judas sold Jesus for money. You, we, all of us together, of different religions, different cultures, but children of the same Father, brothers – and there, those poor people, who buy weapons to wreck fraternity. Today, at this time, when I do the same act of Jesus washing the feet of twelve of you, let us all make an gesture of brotherhood, and let us all say: “We are different, we are different, we have different cultures and religions, but we are brothers and we want to live in peace.”
This, then, is the gesture that I make with you. Each of us has a story, each of you has a story you carry with you. Many crosses, many sorrows: but also an open heart that wants brotherhood. Let each, in his religious language, pray the Lord that this brotherhood be contagious in the world, that there be no 30 pieces of silver to purchase a brother’s murder, that there be always brotherhood and goodness. So be it.
Posted by Jesus Caritas Est at 3:05 PM